The Tesla Model S is a 100 per cent electric luxury car that does 0-60mph in 3.1 seconds. It has the world’s largest in-car satnav with a Californian touch.

Tesla doesn’t do anything by halves. Their cars are 100 per cent electric, meaning no engines or mongrel hybrids to speak of.

The Tesla Model S pushes the boundaries of car making norms whilst superbly maintaining the balance between high performance and efficiency.

With enough gadgets and features to fluster even James Bond for well over a week, DESIblitz wastes no time in reviewing the Tesla Model S.

The doors are fitted with touch-sensitive slide out ‘Zero Profile’ door handles to complement the aerodynamic build of the Model S. 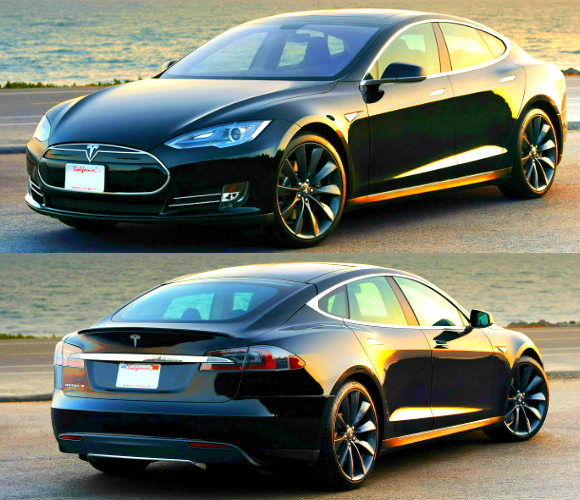 A Senior Sales Advisor at Tesla commented: “At Tesla we always aim to provide the driver with a 10 out 10 experience. This is the most advanced car in the world.”

Concealed in the rear light on the passenger side is the all-important charge port.

Tesla claims ‘charging your car is a lot like plugging in your mobile phone’. 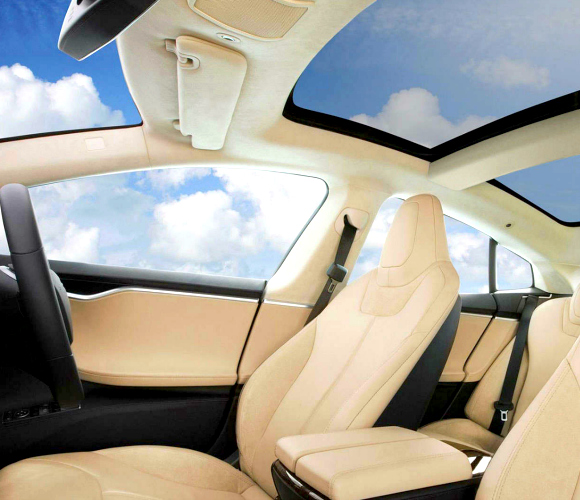 Inside the Model S, the cabin is strikingly modern and minimalistic, typifying its Californian heritage.

Boldly standing out is the gigantic touchscreen – the control hub of the Model S. It is also the world’s largest in-car sat-nav. More about that later.

With no engine there is ample storage space in the boot as well as under the bonnet.

The dashboard provides tonnes of information and can provide a handy 3D sat-nav in good eye range.

There is plenty of space in the back for 3 adults to sit comfortably. 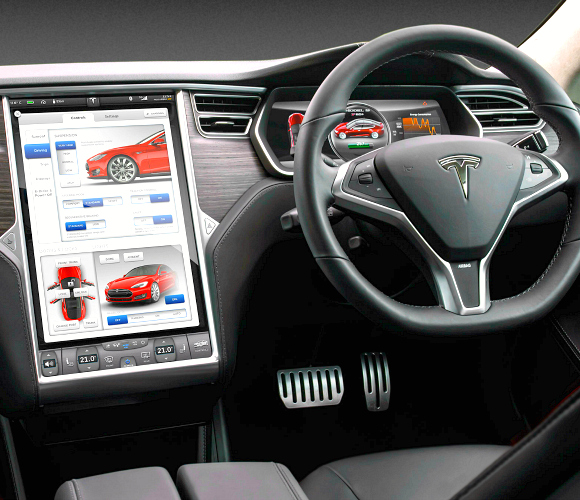 Almost every feature of the car can be controlled at arms-length by the driver through the giant 17 inch capacitive touchscreen from the sunroof to the suspension.

Synchronisation with smartphones allows journeys to be calculated to coincide with calendar appointments.

Software updates can be provided at any time for continuous upgrades and improvements.

Autopilot mode will enable the car to steer around curves and bumps while automatic lane changing is possible by simply tapping a button.

The Model S can remember suspension settings made on specific roads and apply them automatically next time. 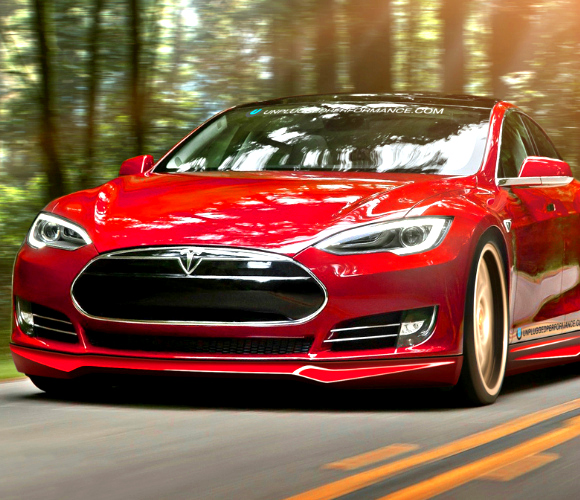 The car glides in silence with ease. This particular model is able to reach 0-60-mph in 5.4 seconds, maximising all of its 362 brake horse power (bhp).

Californian CEO Elon Musk firmly sits in the corner of eco-friendly without compensating on style or power. Asked about the Model S he commented:

“This is the fastest accelerating four-door production car in the world. That’s one hell of a milk float.”

The car automatically starts to brake once the foot is off the accelerator and while this makes great sense, it does take some getting used to.

In doing this though, the pedals cleverly recharge the twin motors to increase the driving range. 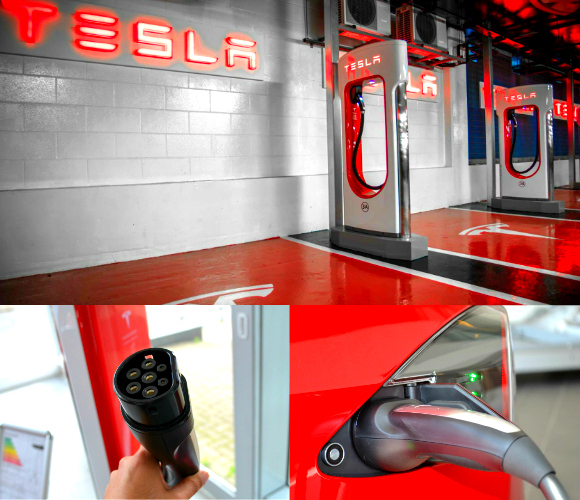 This may seem expensive at first, but once savings on fuel are factored in along with no engine parts to ever be replaced, the price tag becomes more appealing.

Also, with software updates regularly improving the car, the Model S should hold its value and be a sound investment.

The Model S 85 can reach a range of around 310 miles on a full charge powered by an 85 kWh battery and for a fraction of the price of a regular petrol or diesel top up.

For long journeys (over 350 miles) fear not, as Tesla cars make use of the standard nationwide network of electric charging stations.

As well as this and the home charging kit that comes with the car, Tesla is continuously producing more of its own ‘Supercharger’ stations around the UK.

Tesla, having only been around since 2008, is an emerging car manufacturer in the UK with its Model S protruding from the shadows.

It easily competes with the established petrol guzzling giants like BMW, Mercedes-Benz and Audi.

The Model S is a revolutionary vehicle; encompassing radical eco-friendly technology whilst unlike other fully electric cars performs to spectacular heights.