A teenager from Bradford flew a plane solo. She has now spoken about what it was like flying alone for the first time.

"I was so excited to fly solo."

Bradford teenager Aisha Mohammed revealed what it was like flying a plane alone for the first time.

In December 2021, the 19-year-old took to the skies in the Aquila A211, a single-engine aircraft, in Scotland.

Aisha was able to do so thanks to a scholarship provided by the Royal Airforce Air Cadets.

She took part in the Air Cadet Pilot Scheme before she was cleared to fly solo out of Dundee airport.

This consisted of 12 hours of flight training, including ground school and exams.

Aisha said: “I was so excited to fly solo.

“I was shaking with excitement when my instructor left me alone in the Aquila.

“When I started the aircraft, I was just screaming by myself. I don’t think I stopped screaming until I landed.

“It was terrifying at first.

“The take-off was the easiest but worst bit because you never know how much you have to pull back. If you do it too far, you might stall the plane.

“There is so much that could go wrong, you have to fully concentrate.

“Once you’re up in the air, you just forget about everything. You are sat in the cockpit thinking this is amazing.” 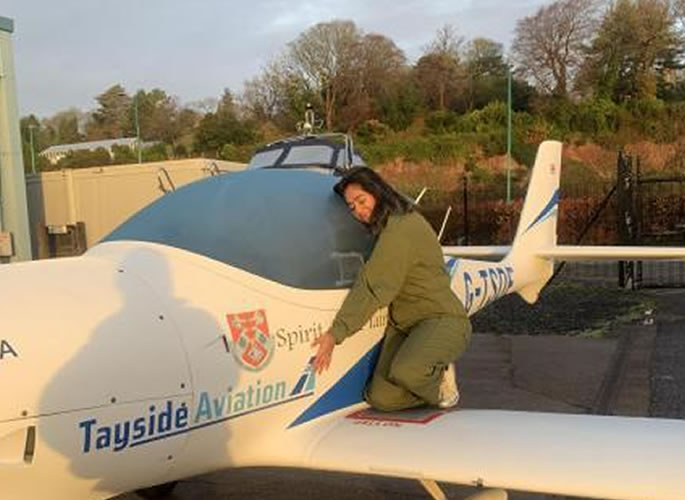 Aisha, who is from Girlington, had an impressive cadet career.

Beginning at the age of 17 of 2019, Aisha was eager to gain a scholarship and go airborne.

Aisha continued: “From a young age, I have always wanted to fly and had an interest in aviation.

“Every kid dreams of being an astronaut, so I thought I could do something a little more realistic.

“I thought air cadets would be crucial in that because they offer flying experiences through the ACPS scholarship.

“When I joined, it was mostly boys. It has since become more diverse. There are more females joining because they are offering more opportunities.”

The year 2021 also saw Aisha become the first-ever Lord Mayor’s cadet for 44F City of Bradford. She retained the role until September.

The first-year Mechanical Engineering student at the University of Bradford added:

“It was a great honour.

“It is really exciting to do duties with the Lord Mayor.

“We have been an organisation for 80 years. So to become the first Lord Mayor’s cadet is a great achievement for me and the squadron.”

Dhiren is a journalism graduate with a passion for gaming, watching films and sports. He also enjoys cooking from time to time. His motto is to “Live life one day at a time.”
Pakistani Police will Marry ‘Lovers’ celebrating Valentine’s Day
Doctor reveals Double Life as Latin Popstar