"if any (dating) couple is found in bazaars, parks and markets"

A video has surfaced on social media of a Pakistani police officer making a stern announcement regarding the prohibition on celebrating Valentine’s Day in Pakistan in 2022.

The video shows a police officer holding a microphone with a speaker system on a stationary vehicle and making the announcement so that hear all the public passing by can hear what is said.

The announcement highlights Pakistan’s contention with Valentine’s Day. Hardliners have protested against the celebration of such a day, wherein in 2017, Pakistan’s high court banned the promotion of the day.

Any traces of Valentine’s Day celebration is public spaces and the selling of merchandise and promotion of the holiday in media has been banned by an edict.

In 2016, Mamnoon Hussain, the president at the time, told a gathering of mostly female students that the day “has no connection with our culture.”

The policeman announces to everyone saying:

“To every person here and as I address all of you.

“It is hereby said that tomorrow (February 14, 2022), on Valentine’s Day, if any (dating) couple is found in bazaars, parks and markets, then they will be forcefully married.

“This announcement is brought to you by the government of Pakistan.”

The video appeared on Twitter with a post highlighting that couples seen in public places will be forced to marry if found by Pakistani police.

In #Pakistan police is announcing that couples found in public places on #ValentinesDay2022 will be forced to get married! #India #Blasphemy pic.twitter.com/bn6VwLAksp

The announcement is a clear warning to any people trying to celebrate in public. Hence, implying the police will be on a major lookout on Valentine’s Day for any such behaviour.

That hasn’t dampened enthusiasm for some Pakistanis. Despite police interference and surveillance, romantic rebels find ways to acquire flowers and give their lovers sentimental gifts for the holiday, though most do so under wraps. 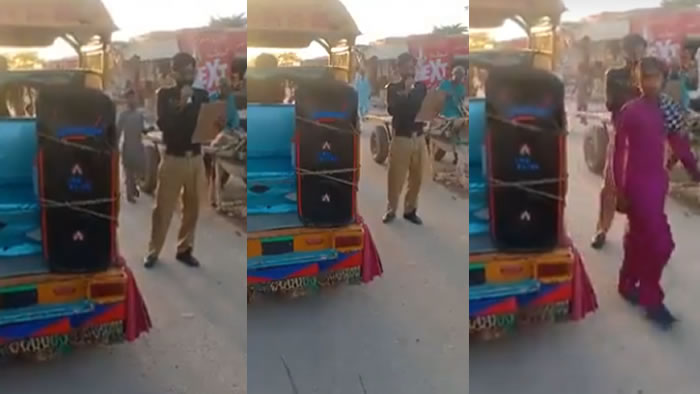 In a similar fashion, according to a media report by the Friday Times newspaper, the Islamabad International Medical College has issued guidelines for its students specifically related to Valentine’s Day.

It states that girls must wear their hijabs and boys to wear their prayer caps and to maintain a distance of 2 metres from all opposite sex at all times.

The college forbids its students from participating in Valentine’s Day celebrations and associated “activities which lead the youth towards the wrong path.”

The flyer sent out to students said:

“All female students should be seen with properly-covered heads, necks and chests with a hijab according to the university dress code. All male students are strictly ordered to wear white prayer caps.”

The circular states that members of the college staff would be patrolling the campus to catch students violating these guidelines. Any caught will be fined PKR 5,000.

Pakistan is not the only country that is against the celebration of Valentine’s Day. Other countries include Malaysia, Iran and even India.

Hindu hardliners and nationalists in India have also called for bans on the celebration. A campaign on social media in 2020 focused on an anti-Valentine’s Day message.

In 2015, similar to the Pakistan announcement,  a fringe far-right Hindu political party threatened to marry couples by force who were showing public display of love on social media.

Nazhat is an ambitious 'Desi' woman with interests in news and lifestyle. As a writer with a determined journalistic flair, she firmly believes in the motto "an investment in knowledge pays the best interest," by Benjamin Franklin.
Thief stole Car with Child Inside then Ran Over Mother
Teenager flies Plane in Solo Journey