Thirty-four loving Indian couples from the eastern state of Jharkhand got married as part of Valentine’s Day celebrations.

the staff members had thoroughly prepared for the 34 ceremonies.

Valentine’s Day 2020 in Jubilee Park, Jharkhand was packed with loving Indian couples waiting to get married.

In total, 34 couples crowded the area as they lined up with their families to get married at the registry office.

Many of the young women were seen holding red roses while their soon-to-be husbands were seen constantly smiling.

Some couples took selfies in front of the various attractions, which included the park, zoo and fountains.

Security had been present in the area in order to watch over the couples and to ensure that everything ran smoothly.

Meanwhile, organisations turned up in the area to protest against Valentine’s Day.

Many gathered outside the park as security officials prevented them from entering.

They managed to stay for half an hour before they were told to leave the area.

As part of the celebrations, Jamshedpur Registration Office had made preparations for 34 Indian couples to get married.

Marriage officer Prafulla Kumar said that the staff members had thoroughly prepared for the 34 ceremonies.

Initially, 14 couples turned up but as the day went on, the remaining couples got married.

Prafulla went on to say that there was a lot of buzz in the registration office throughout the day.

While some locals got married, others lit candles to honour those killed in the Pulwama attack. A candle march took place. 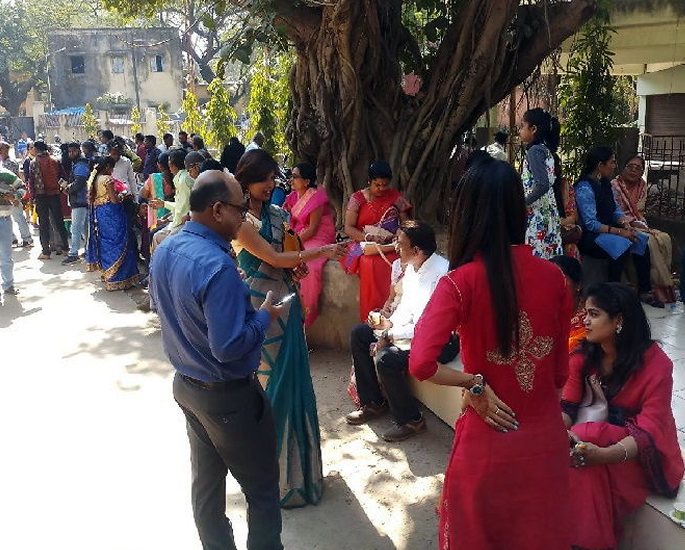 Organisers called upon people to pray for those killed.

One of the organisers stated: “In order to protect the country, the soldiers sacrificed their lives so that the countrymen live comfortably.”

While people paid tribute in Jharkhand, the most prominent ones took place in Telangana where Bajrang Dal stated that patriotism lessons would be given to unmarried couples.

The organisation had allegedly met with DGP M Mahendar Reddy, appealing for Valentine’s Day to be banned.

“Valentine’s Day is a poisonous western culture which is spreading in our country and morally corrupting the youth.

“Several youngsters are spoiling their lives because of these western concepts. This foreign culture is deviating our youth.”

Chander added: “If we find any couple on February 14 on roads, we will ask them why they are roaming outside and call their parents.

“The couple will also be offered counselling sessions and then we will make them honour the slain soldiers by offering flowers and praising the soldiers.

“Valentine’s Day is being promoted by these pubs and hotels for their business.

“They have commercialised it for profit, so we have already given them letters warning them against the celebrations.”

The organisation held a rally on February 12, 2020, and set over 200 Valentine’s Day greeting cards on fire.

Dhiren is a journalism graduate with a passion for gaming, watching films and sports. He also enjoys cooking from time to time. His motto is to “Live life one day at a time.”
Gangster Jaggu B caught for Shooting at Kabaddi Promoter
Undivorced Indian Wife having Second Wedding arrested