A magical comic book has a new heroine for rape-ridden India. Called Priya’s Shakti, the virtual comic takes a stand against the cultural dogma surrounding sexual violence and abuse against women.

"We need to get into the consciousness of young men and young women to make them think differently."

It is without a doubt that India is culturally transforming.

The horrific set of events in 2012, where six men raped a 23-year old Delhi medical student who later died from the injuries, became the catalyst to call for immediate change regarding the treatment of women in India.

Yet, Ram Devineni, a writer and film-maker, has responded to the topic of rape in a thoroughly different way than what we have seen before.

Devineni says: “I was in Delhi two years ago and was involved in the protests. I asked a Delhi police officer what he thought about what had happened on the bus. 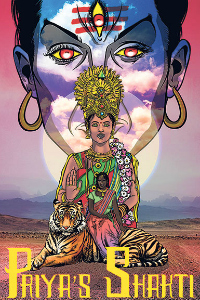 “I’m paraphrasing here, but he basically said ‘No good girl walks home alone at night,’ which implies she deserved it or provoked it.

“I immediately realised the problem of sexual violence in India is not a legal issue but a cultural problem. A cultural shift had to happen especially views towards the role of women in modern society. Deep-rooted patriarchal views needed to be challenged.”

The comic uses elements of Indian mythology and Hinduism to tell the story of Priya, a young rural woman who is gang-raped and outcasted by her family and community.

Priya takes refuge in a temple and prays to Parvati. Parvati is horrified to discover the struggles of women, and gives Priya her “Shakti” to stand up to those who persecute her.

Parvati descends to Earth and inspires Priya to speak out and spread a new message to the world: to treat women with respect, educate all children and speak out when a woman is being mistreated.

“Take this mantra,” Parvati tells her. “Speak without shame and stand with me… Bring about the change you want to see.”

Parvati’s words fill Priya with strength and valour, and a new sherawaali is born. Priya then returns to her village riding a tiger to help other victims gain justice in a society where women are often blamed for the abuse they have undergone. Devineni describes her as “a new hero for a modern India.” 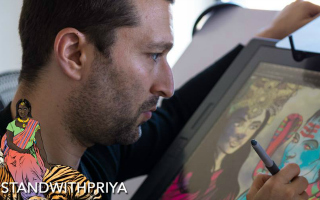 Despite the positive aim in which the comic is trying to achieve, there has been some criticism; most predominantly regarding the sub-plot of Shiva’s temper who decrees the human race shall not be able to procreate, a disproportionate punishment for rape or disrespecting a woman.

More problematically, the rapists disappear effectively getting away with the crime, unscathed.

Devineni said the story developed whilst travelling around India after the Delhi rape: “I grew up reading popular Hindu mythological comics and a common motif was that a villager would call on the gods in dire situations. What was more dire than the problem of sexual violence in India? So, this was the nucleus.”

According to National Crime Records Bureau, there were 309,546 reports of crimes against women in India in 2013, a 26.7 percent jump from 2012. These included rape, kidnapping, sexual harassment, trafficking, molestation and cruelty by husbands and relatives.

Research also shows increasingly that adult attitudes and behaviour are shaped by childhood experiences, and Devineni worked with the anti-trafficking NGO Apne Aap Women Worldwide to challenge sexism in the minds of the young through creating comics such as Priya’s Shakti.

Ruchira Gupta, Apne Aap’s president, supports Devineni saying: “Of course, we need better laws to punish those who rape and buy and sell women, but we also need to get into the consciousness of young men and young women to make them think differently.”

“The message for girls is to stand up to sexual violence and the message for boys is not to dominate, but to have sex with equality and participation.”

“We want to eroticise equality rather than eroticise domination, which is what many superhero comics do.” 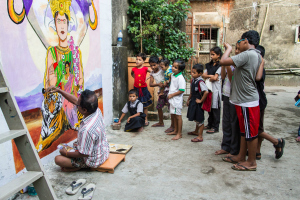 Priya’s Shakti is available free online, with 6,000 copies in Hindi and English printed for educational distribution, as well as painting several large murals from the story on walls throughout Mumbai.

The initiative is also asking readers to ‘Stand with Priya’ by taking a photograph with the character and sharing it on various social media platforms with the tag #standwithpriya.

In a nation where there is little vilification of rape and the cultural stigma associated with it in popular media and entertainment.

Priya’s Shakti is the first Indian comic book of its kind and hopefully not the last. It not only confronts teenagers with the sensitive issue of sexual violence, but it also engages them through its innovative use of augmented reality technology.

Natasha is an English Literature and History graduate. Her hobbies are singing and dancing. Her interests lie in the cultural experiences of British Asian women. Her motto is: "A good head and a good heart are always a formidable combination," Nelson Mandela.
Menstrual Taboos and Myths in India
Deepika Padukone speaks about battle with Depression