The Aravani Art Project founded by Poornima Sukumar aims to highlight the discrimination of transgender people in India community through artistic murals and public street arts.

Social negligence, harassment and discrimination against transgender people have never been an unrecognised discussion in India.

The struggle for accepting and understanding the identity of these people exists in Indian society and their identity rights remain a major issue.

Then, there are people like Poornima Sukumar. A person being creative and enthusiastic enough to think of an idea to tackle this issue, instead of letting the problem be discussed without any action.

So what did Poornima Sukumar think of to help address problems faced by the Indian transgender community?

The idea named the Aravani Art Project aims to help build connections between the transgender community and other communities and cultures in their local neighbourhoods.

Poornima, a freelance artist and explorer travelled to remote parts of India where she built friendships with some of the most marginalised people of the country. She loved the way they welcomed and nurtured her and wanted to do something appreciable for them in return.

Being aesthetic, she felt the street arts and murals to be an amazing way to empower transgender people in India. 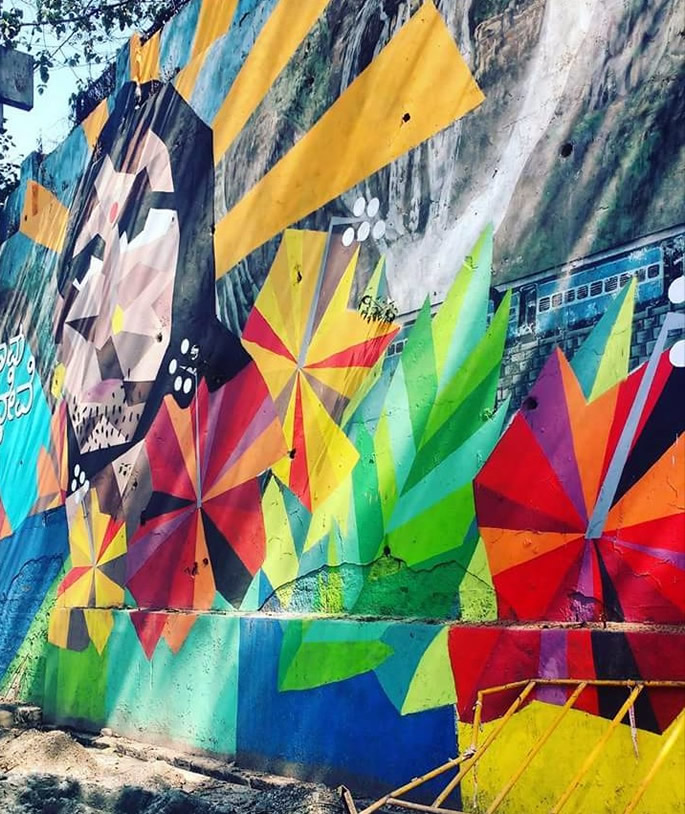 Sukumar’s earliest interaction with transgender people came when she began to help British documentary filmmaker Tabitha Breese on a movie about the community, as her specialisations lie in large murals and wall arts.

“It took about three-and-a-half years to finish the documentary and by then I was completely disgusted by how society turned a blind eye. The transgender community was a thriving pool of beautiful human beings but never seen as that.”

The Aravani Art Project, a space for the neglected community to express themselves through street art, was named after Lord Aravan, the virgin son of the Pandava prince, Arjun.

According to the myth, Aravan married Lord Krishna for a night and offered himself as a perfect male for sacrifice, so that the Pandavas could win the battle of Kurukshetra.

Every year, in the town of Koovagam, Tamil Nadu, the transgender community celebrates the Aravani Festival after being symbolically married to Krishna for a night and mourning the death of their symbolic husband the next day:

“The word Aravani is used for any devotee of Lord Aravan, in the Tamil language,” says the founder.

“This is a word without the stigma that a word like ‘hijra’ carries in society.” 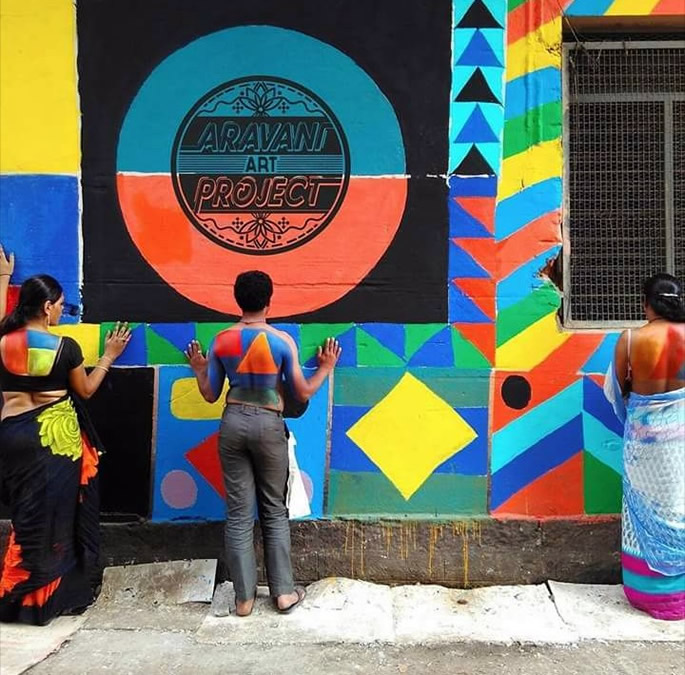 Sukumar mentions that the team aims to touch the lives of people from the transgender community in different parts of the world to create a sense of well being through art-based activities.

They invite these communities to share their history, transform their knowledge into street art and paint together:

“I’ve chosen the hibiscus as the main symbol as it is a unique, beautiful flower that has both male and female parts,” Poornima says about a visual motif used in one of the murals, titled Naanu Iddiv (meaning ‘we exist’ in Kannada).

“The designs were simple and geometric so they could paint it easily. Since they were untrained, I could not immediately expect them to design something. But the end goal was for them to design their own wall and paint it.” 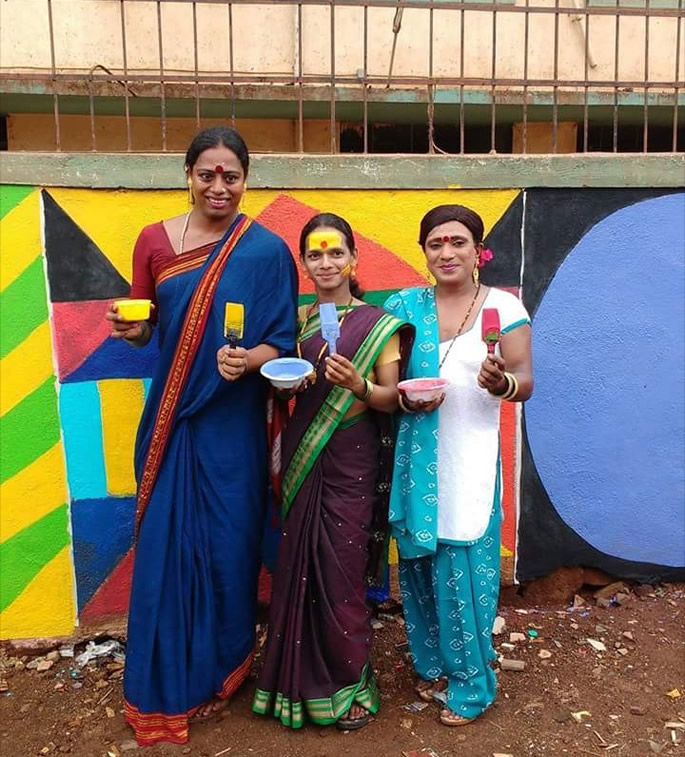 The project came into existence when its first wall art started in K. R. Market – Bangalore in January 2016, as a soulful experiment carrying a message of ‘Inclusion.’

Despite the lack of management in the team, the initiation of the Project was a success.

Their second project took them a while to understand the dynamics of working with the transgender community and execute their plans in politic and socio-economic conditions of working in public spaces.

In alliance with ‘Humsafar Trust’ and ‘Aarogya Seva’, the Aravani team executed their second project in Masjid – Mumbai in June 2016. The message was again ‘Inclusion’.

The third project brought the squad to Dharavi, Mumbai on January 14, 2017. There, they reflected the falsity of the presumptuous facts that go around the outside world, when they met the most welcoming and warm group of people.

This project did not have a particular theme but they celebrated ‘togetherness’ with the transgender people.

The fourth project was in association with St+art India. On May 14, 2017, a mural of a trans-person was painted as a very significant citizen, on the Dhanvanthri Road in Bangalore, reminding us of their existence in today’s dense society. 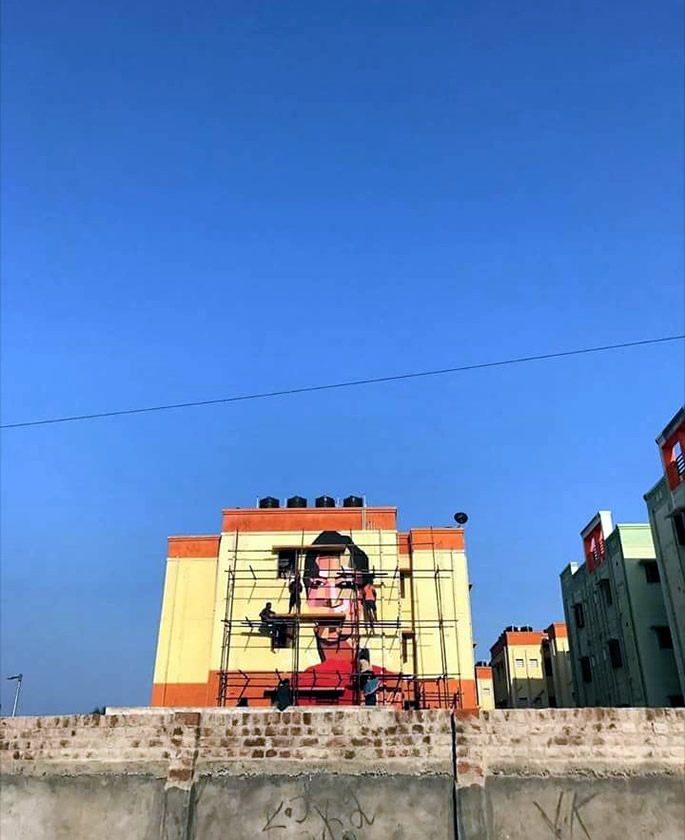 One of the transgender members of the team says:

“The project proposes to remind people of our inherent acceptance of gender fluidity. The colour blurs the world around them, painted by 5 transgender people who painted with their heart and soul.”

The Aravani team has completed 14 public projects across red light areas, ghettos and slums across dense cities of India using art as a tool of public awareness and engagement.

Working with one community helped them connect with several others. Each public post depicts a transgender person surrounded by culturally specific and vibrant motifs.

“It will take at least a year to really break the ice and see what to do next,” she adds.

Any funds raised by the project are divided equally among the members and a small portion is poured back into the activities. The founder hopes to develop the project as a self-sustaining venture.

They also foresee organising workshops in colleges to interact with students about their work, encourage public support and eventually, help the transgender people in India to blend into the fold of mainstream society.

Find out more about The Aravani Art Project here. 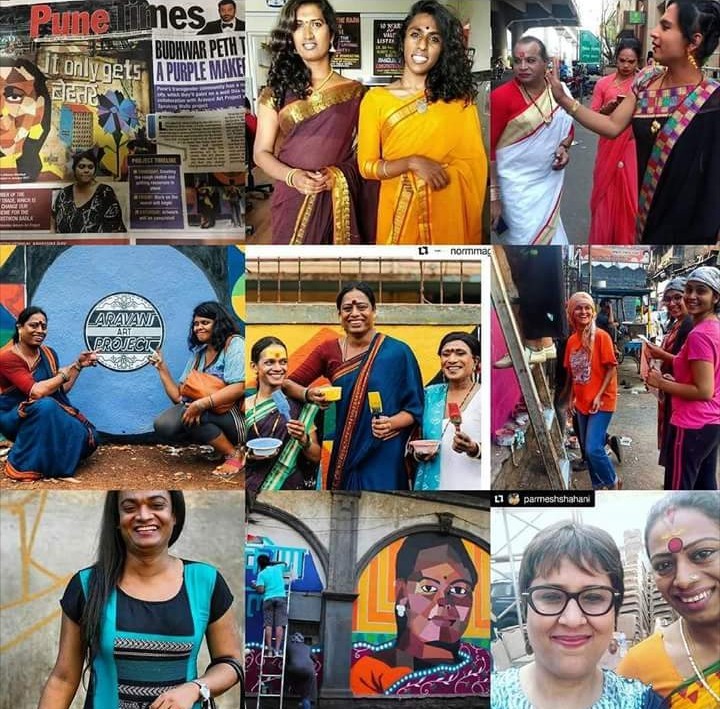 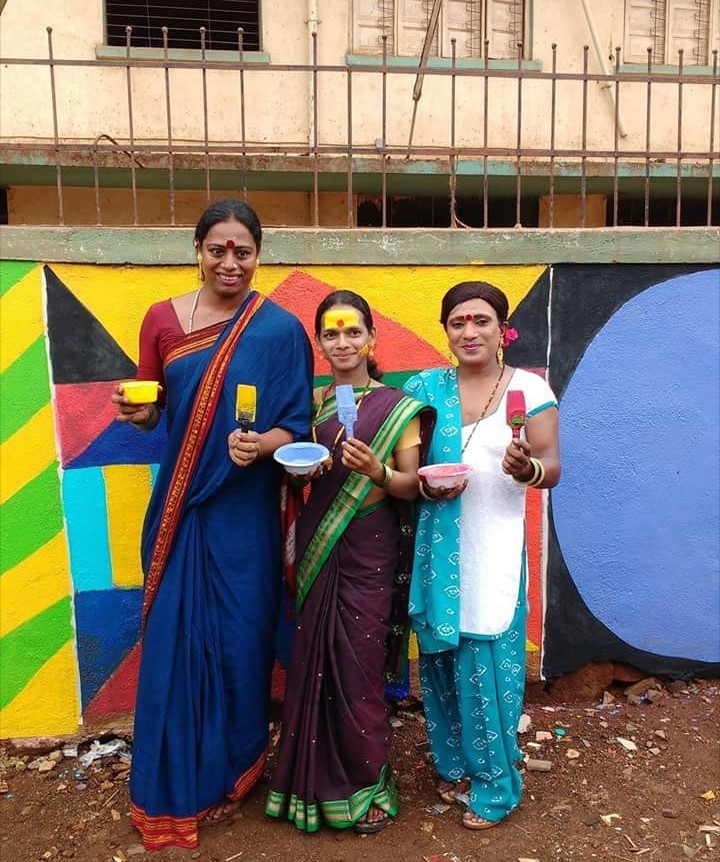 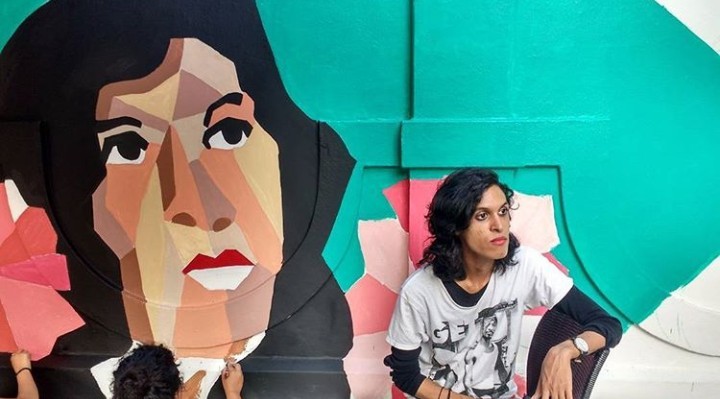 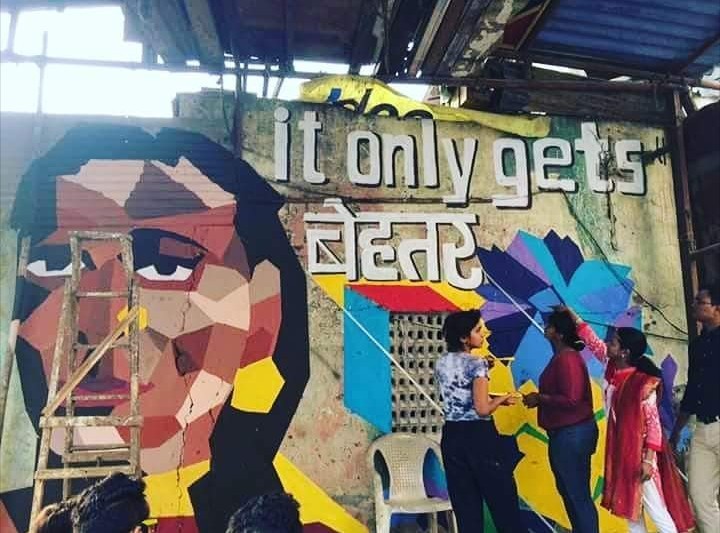 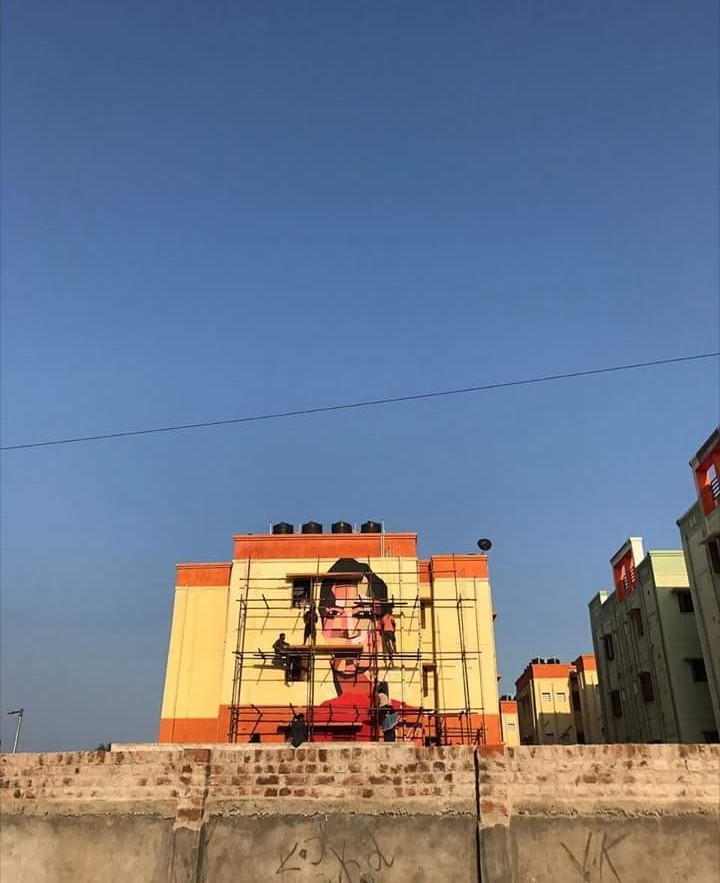 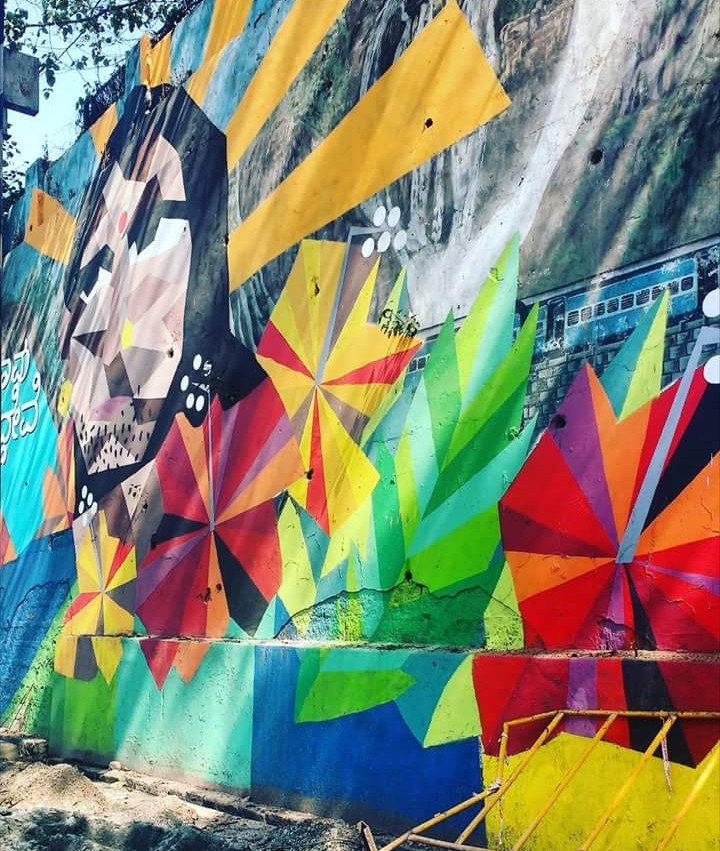 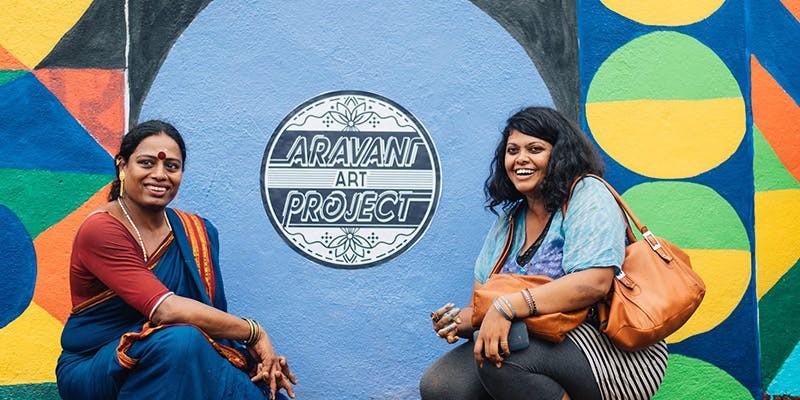 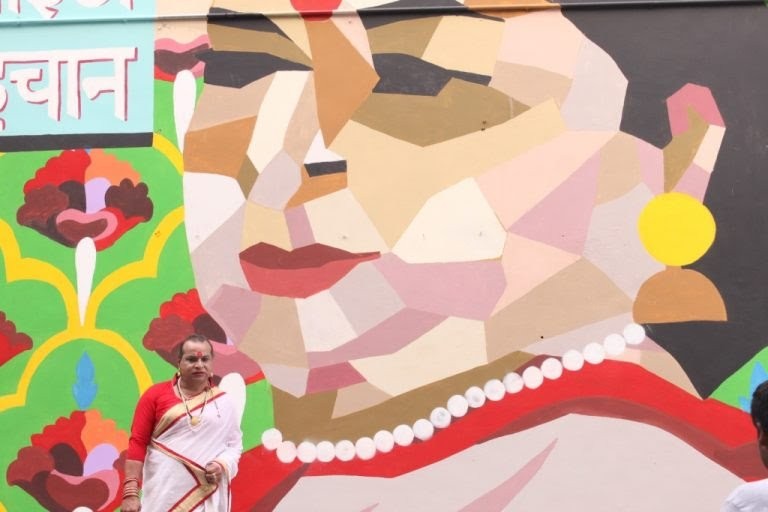 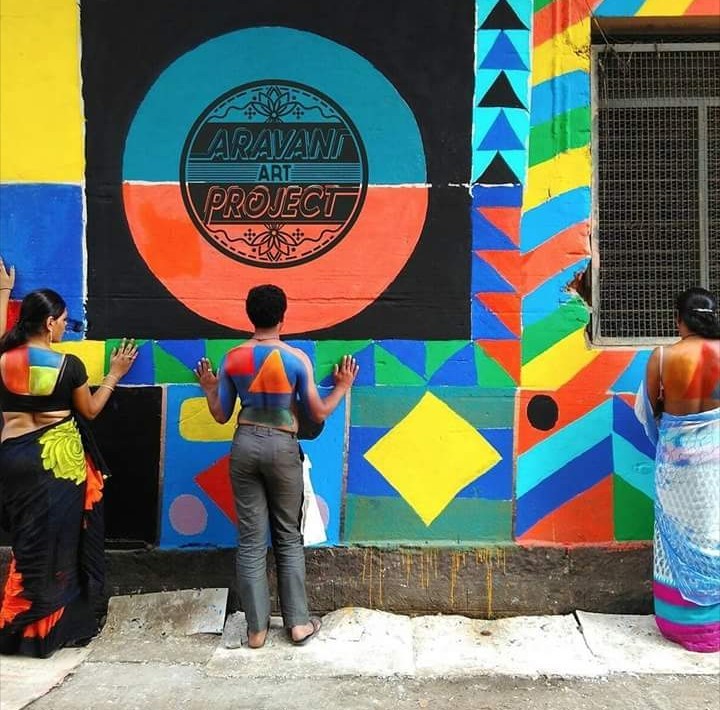 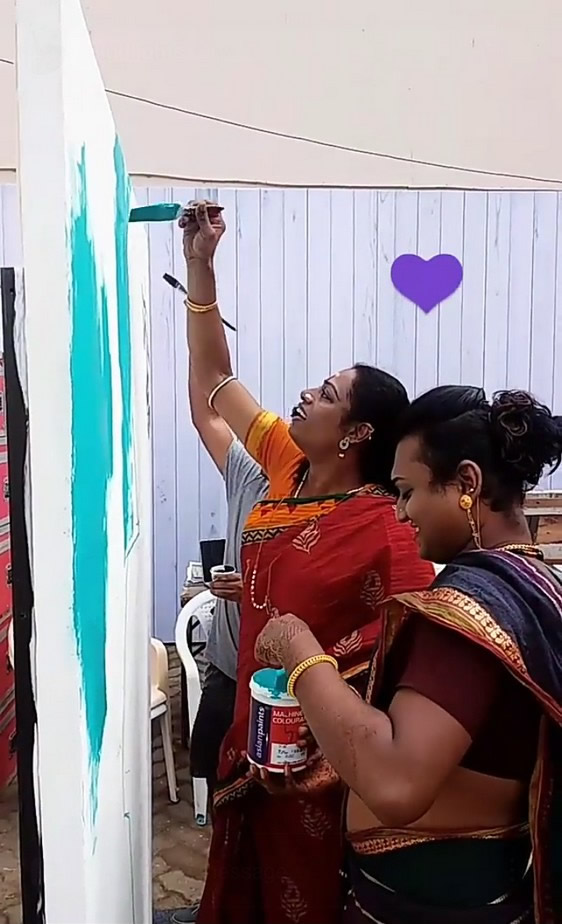