If Kim Kardashian’s pic broke the internet, wait till you see the latest heart melting picture of Salman and Shahrukh reuniting at Arpita Khan’s sangeet ceremony!

Every single Bollywood fan from every corner of the world knows that Salman Khan’s sister Arpita is all set to get coupled with her Delhi-based lover Aayush Sharma on November 18, 2014.

The Galaxy Apartments (Salman’s home) is lit up and has been decorated like a bride itself and the whole Khan-daan is on its way to Hyderabad’s Falaknuma Palace to celebrate the extravagant wedding.

If you thought this would be a typical big fat wedding, with all the starry affair, then you’re in for a surprise!

On Sunday night (November 16, 2014), when Arpita was celebrating her sangeet ceremony at Galaxy Apartments, something magical and overwhelming happened for all the Salmaniacs and SRKians.

Apparently Shahrukh Khan, who thinks of Arpita as his baby sister, dropped by the Galaxy apartments, to attend Arpita’s Sangeet ceremony. 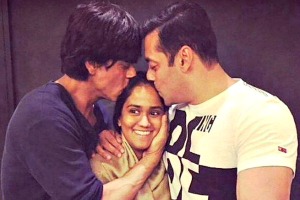 “He hurried to receive Shahrukh and gave him a long tight hug. The moment was so emotional that the entire family clapped and cheered for the duo.”

Like every time Salman and Shahrukh have come face to face and just hugged each other, your heart will melt to know that they outdid themselves this time.

They didn’t just hug each other but also gave their fans and Arpita, one of the best picture perfect moments of her, and our lives. They blessed Arpita by kissing her on the head and showed her how much they both love her.

In the picture, which instantly broke the internet, Salman Khan is dressed up in his (as expected) Being Human tee and King Khan too in his signature dark blue tee and denims. Arpita of course cannot stop smiling from ear to ear and blush.

Bride-to-be Arpita Khan couldn’t contain her excitement and right away shared this pic of Salman and SRK kissing her at her sangeet ceremony in Mumbai on instagram and wrote: 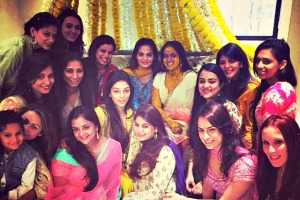 Salman’s brother-in-law, actor-director Atul Agnihotri also tweeted the same picture with the caption, “Bhai.” which has already got 978 retweets.

Evidently, Salman was so overwhelmed with SRK’s gesture that he looked after SRK personally and even became his personal bartender:

“He personally looked into what was being served to Shahrukh. He even turned bartender and made a special drink for him,” said the source.

When SRK asked Arpita about what she would like as a wedding gift, without even too much of a thinking, she promptly replied that: “Mujhe aap aur bhaijaan phir se ek saath chahiye.”

Isn’t this too overwhelming to handle all together at once?

However, this heart melting photo, presenting SRK as a symbolic member of Salman’s family, will definitely overwhelm fans overwhelmed who will be hoping the five-year-long animosity has finally come to an end. 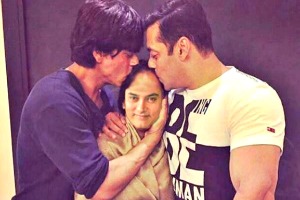 For the Aamir Khan fans, who are feeling left out amidst all this, we have a fun photo for you too, created by some internet enthusiasts.

The sangeet ceremony was attended by many Bollywood celebrities, followed by the mehendi ceremony which was only attended by close relatives and family friends.

Arpita will tie the knot with her long time beau Aayush Sharma at the famous Falaknuma palace in Hyderabad on November 18, 2014, which will be attended by Salman Khan’s family and close friends from the film fraternity.

The Khan-daan will also be hosting a grand reception in Mumbai on November 21, 2014 which will witness the cream of the crop of Bollywood royalty in attendance.

Komal is a cinéaste, who believes she was born to love films. Apart from working as assistant Director in Bollywood, she finds herself doing photography or watching Simpsons. “All I have in life is my imagination and I love it that way!”
Kim Kardashian to appear on Bigg Boss 8
Kill Dil ~ Review