Sania Mirza and Mahesh Bhupathi won the Mixed Doubles Grand Slam title at the Australian Open Tennis tournament on Sunday 1st February 2009 in Melbourne. Sania makes history being the first Indian woman player to win such a title.  They won Andy Ram and Natalie Dechy in straight sets. The score was achieved in 55 […]

"Its one of most special wins, it's a Grand Slam."

The score was achieved in 55 minutes with a 6-3 6-1 win. The Israeli-French opponents were thrashed in an exciting Indian powered game by Mirza and Bhupathi. The performance by Bhupathi was solid with his service and he displayed great hands at the net throughout the match. Sania complemented him with powerful forehands.

Returning to Hyderabad, Sania had an enthusiastic and overwhelming welcome. During coverage of her win by media, she reacted showing her extreme happiness. Sania said, “Its one of most special wins, it’s a Grand Slam. And it’s something that we always play for and pray for when we are growing up. So I am just happy that I could win this and achieve a Grand Slam, which has been my dream always.”

This is Mahesh Bhupati’s 11th Grand Slam and 7th Mixed Doubles title win. After this historical win, he said,“Our opponents have won a Slam before, so they obviously know what they’re doing, but we came out all guns blazing from the start. I’m looking forward to playing other Slams with Sania too.”

The prize money for the win was 1,34,460 Australian dollars. Giving them a well-deserved reward for their skills and efforts to win the first joint Grand Slam title. 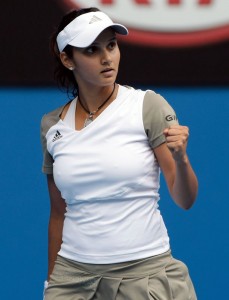 Sania’s mother, Naseema Mirza, is awed by the win and very proud of her daughter’s achievement. She said, “It is a mixed doubles no doubt but a Grand Slam is a Grand Slam.” Sania had not been totally well health wise and Naseema added, “She performed well and went on to win despite facing a stomach problem for the last few days,” she said. “It was a great come back for her after a wrist injury forced her out of action for the last several months,” added Naseema.

Sania’s former coach Narendranath said, “It is a very good for moment for all Indians and all Hyderabadi’s. It is wonderful.”

The renowned Indian Tennis player, Vijay Amritraj commented on Saina’s success and said that she is now at the best phase of her career.  With the notion that Indian players mature later in the game, he said,”For a female, it is little bit more. For example, Sania is 22. Now is the best chance for Sania to improve upon her results and ranking for another five or six years to do what she needs to do and work harder without getting hurt.”

When Sania was asked about her future plans, she said with huge enthusiasm, “I am happy to win my first Grand Slam and there are many more to go.”

Amit enjoys creative challenges and uses writing as a tool for revelation. He has major interest in news, current affairs, trends and cinema. He likes the quote: "Nothing in fine print is ever good news."
Tata sponsors Ferrari F1
Top IPL bids for England Players