“I didn’t think that we would be able to pull this off."

Salman Khan is set to release his upcoming song titled, ‘Tere Bina’ (2020) during the coronavirus lockdown.

Before the lockdown was announced, Salman Khan was residing at his Panvel Farmhouse along with some family members and friends.

They have spent the last seven weeks at his farmhouse and have been finding ways to keep engaged amid the lockdown.

Salman is gearing towards the release of his romantic track, ‘Tere Bina’ (2020) which also features Jacqueline Fernandez in the video.

The video was shot with social distancing and lockdown measures in mind and is picturised on the beautiful areas in and around his farmhouse.

Salman Khan, who has starred in the video and sang the song, has also directed the video. Speaking about the filming for ‘Tere Bina’ (2020), he said:

“About seven weeks ago, when we came to the farm we didn’t know that we would be here under a lockdown.

“So, we wanted to keep ourselves busy and that’s when we decided to do these songs.”

In fact, Salman Khan revealed that his song ‘Tere Bina’ (2020) was created some time ago. He explained:

“Back home in Bandra, we have a neighbour, Ajju (Ajay) Bhatia, who would keep asking me to sing for him.

“So far, I have sung four songs for him. ‘Tere Bina’ is one of those. It wasn’t fitting into any of my films, so we decided to release it now.”

Jacqueline, who is also living with the superstar said:

“I didn’t think that we would be able to pull this off. We are used to shooting songs on a large scale with grand production costs with the right costumes, hair and makeup.

“Here, we were a team of just three people; Salman, the DOP and me. For the first time, I was checking lighting and moving props around.

“It was a great experience and it taught us to make the most of what we have.”

On his YouTube channel, Salman shared a teaser of ‘Tere Bina’ (2020) and described the song. He wrote:

“Life is incomplete without that special someone who lights up every moment of life. With them, every step is an opportunity and every day is a new beginning.”

Watch the Teaser to Tere Bina 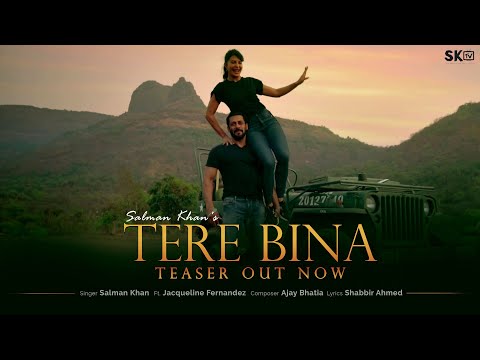 Ayesha is an English graduate with an aesthetic eye. Her fascination lies in sports, fashion and beauty. Also, she does not shy away from controversial subjects. Her motto is: “no two days are the same, that is what makes life worth living.”
Poonam Pandey arrested by Police for Ignoring Lockdown
Boman Irani admits his proposal to Wife would be considered “Bonkers”