Rihanna posted a bold topless photo of herself, however, one accessory she was wearing has sparked a cultural appropriation row.

The singer was promoting her lingerie line, Savage X Fenty.

Using her arm to cover her modesty, she sported accessories such as large diamond-studded earrings, pearls and the Ganesha necklace.

Traditionally, Ganesha, or Ganesh, represents wisdom and success. Statues and paintings of the deity are widely available in India.

While the post attracted more than 9.9 million likes, the inclusion of the necklace, along with Rihanna’s bare chest and tattoos have angered Indians, with some calling it cultural appropriation.

One person said: “You’re wearing a deity necklace and a Murthi [image of a deity] of my culture that’s already been culturally appropriated enough.

“How is this OK when a person has more than enough resources to at least find out the meaning and significance of the chains and the pendant around their neck?”

Another said: “I hope she returns the necklace because she clearly doesn’t know how to wear it because it’s mad disrespectful.”

“Our first god, a holy sentiment to millions of people celebrating Ganesh Chaturthi every year.

“Sorry Ri, u disappointed me & others, u have crossed the limits.” 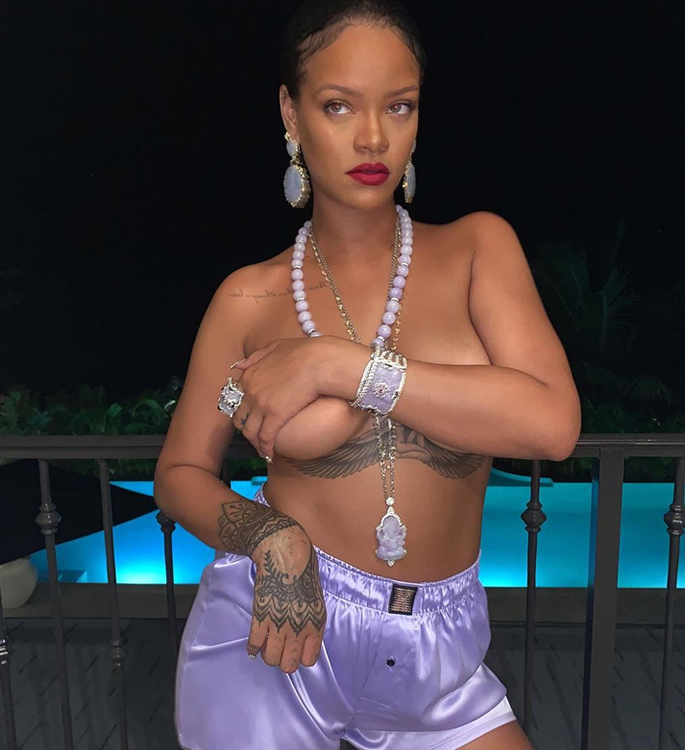 One person asked: “Why the Ganesh God pendant for selling lingerie?”

Some netizens felt the singer wore the necklace for shock value:

“First having a lingerie campaign in a temple. And now this… at this point she’s just doing it on purpose.”

One person said it was on purpose, given that she has been vocal about the ongoing farmers’ protest.

“This ain’t coincidence… this is after she supported that farmer protest.”

In early February 2021, Rihanna tweeted about the farmers’ protest. This prompted a wave of international personalities to also show their support.

However, it angered the Indian government.

The government replied, condemning the “sensationalist social media hashtags and comments, especially when resorted to by celebrities and others”.

This is not the first time that Rihanna has been criticised for cultural appropriation.

In October 2020, the singer apologised for her “unintentionally offensive” used of sacred texts during a lingerie fashion show.

After receiving backlash, Rihanna thanked her fans for highlighting it, calling it an “honest, yet careless mistake”.

Dhiren is a journalism graduate with a passion for gaming, watching films and sports. He also enjoys cooking from time to time. His motto is to “Live life one day at a time.”
6 Top Pakistan Super League Cricket Anthems
Indian musicians to Honour Pandit Ravi Shankar at Exhibition