Rani Mukherjee makes her comeback to Bollywood with a romantic film about cricket and shouts ‘hadippa’ to the crowds in Toronto at the TIFF.

Rani, looking fabulous in a black trouser suit at the press conference in Albion Cinemas, Toronto, was a petite ball of energy who was very excited to talk about the film and encouraged everyone to try playing cricket at some point in their life.

Dil Bole Hadippa is about a young woman named Veera who is from a small village and is an incredible cricket player. She has dreams of playing cricket professionally but unfortunately, in her small village, there is no place for a woman on the local men’s team. She disguises herself as a young Punjabi man to gain a spot on the team and fulfil a life long dream. 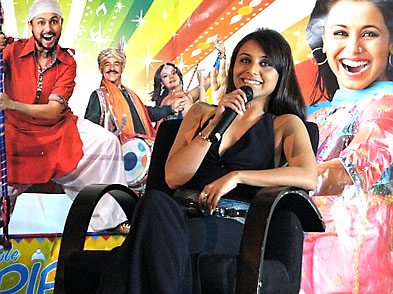 Rani tells us she spent 6 months training to convince audiences of her cricket skills and she enjoyed every minute of it.

As for playing her male Punjabi character Veer, she says she spent so much of her life around Punjabi men that she really didn’t need to do research for her male character nor was it modelled after any particular person. She just naturally gave Veer the characteristics she has seen in Punjabi men throughout her life.

Of her co-star Shahid Kapoor, she said they had great chemistry and she seemed very happy about having had a chance to work with him and would love to again. When asked about male co-stars and if she ever had a crush on any of them when she first started acting, she said she had crushes on Shahrukh Khan and Amir Khan.

Watch the trailer of the Dil Bole Haddipa, a behind the scenes documentary with interviews from Shahid and Rani, also showing her preparation and fitness regime for the film and the making of the hit song ‘Discowale Khisko’ from the movie. 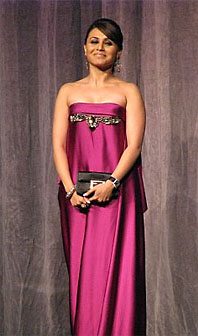 Urmila Matondkar was initially offered to play a cameo role in the film. Matondkar eventually opted out of the film and the role was given to Tabu instead.

The film was originally to be called simple Hadippa, but Sanjay Leela Bhansali had already bought the rights to use the title in his own film, and wasn’t willing to give it up. So it had was announced that the movie title would be Dil Bole Hadippa.

On Sunday, September 13, Rani arrived at the Toronto International Film Festival (TIFF) with director Anurag Singh. She looked stunning in a long purple dress with her hair pulled back.

Both Anurag and Rani said a few brief words to the audience and Rani gave a “Hadippa” shout out to the audience. The film was very well received by enthusiastic TIFF attendees and the music, by Pritam, definitely had toes tapping.

Heather Manning is from Toronto, Canada. As a non-Desi, she has an avid interest in Bollywood and its stars. She believes nothing is impossible if you have your heart set on it and make an effort to achieve the things you want in life.

Yash Chopra is top Asian Filmmaker
What’s your Rashee? Piracy an Inside Job