"Ishani is so much like me. She is Indian, eloquent, well spoken and sexy."

The movie, which is a spin-off of the much-loved Cars franchise, is the first of the Planes series. From above the world of Cars, Priyanka Chopra stars in this family entertainment film alongside Dane Cook.

Bollywood’s home grown Priyanka Chopra has had an impressive career so far; from a model to an Indian film actress, singer and songwriter. Winner of Miss World 2000, Priyanka is one of the most popular celebrities in India, and known to have become Bollywood’s highest paid actresses. 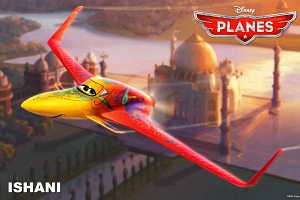 Taking a new turn with Disney’s Planes, she has let out a different side of her acting career away from Bollywood and now emerging into Hollywood.

DisneyToon Planes is about a small-town crop-dusting plane, Dusty (voiced by Dane Cook), who has a dream to compete as a high-flying air racer.

However, the two problems he faces is that he isn’t built for racing and he is also afraid of heights. Skipper Riley (voiced by Stacy Keach), a seasonal naval aviator offers his help to take on the defending champion of the villainous racing circuit named Ripslinger (voiced by Roger Craig Smith).

Dusty who has never flown above 1,000 feet sees his courage put to the test as he aims to reach heights he has never thought possible, giving the whole world an inspiration to reach with flying colours. 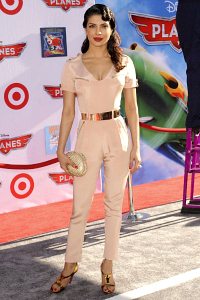 Klay says: “I think people will really relate to the film because it’s a great underdog story.” He adds that the story has a lot of heart and is a message that relates to us all:

“If we can believe in ourselves, step out of our comfort zones and get past whatever fear is holding us back, we’d be surprised with the results,” Klay says.

Priyanka voices the character of a Pan-Asian champion from India called Ishani. Sleek and chic but when in the skies ruthless is all you will get. Her high-speed competitiveness and talent grabs the attention of billions of loyal fans, including one rookie racer who turns to Ishani for assistance.

Speaking about her character, Priyanka says:

“She’s sassy and she really wants to win a world championship, but she has a really good heart. Ishani is so much like me. She is Indian, eloquent, well spoken and sexy. Having worked on more than 40 films, it’s so rewarding to literally breathe life into a character like Ishani. I’m very passionate about my work.” 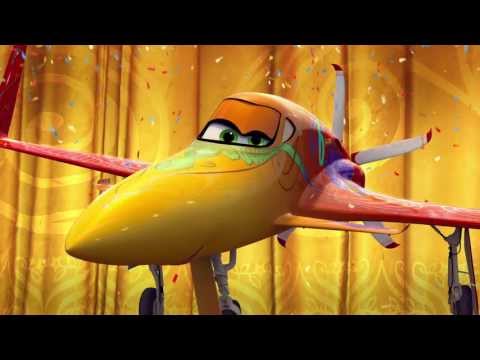 Priyanka also plays the love interest of the main lead Dusty. For Priyanka, her involvement in the Disney animation has to be one of her most exciting projects to date:

“Disney is one of my favourite movie makers of all time. I love all Disney movies. In my head, I’m Tinkerbell. I’m a fairy and if I could be anybody, I’d be Tinkerbell with magic dust. So it was the closest I could come to being a Disney princess I think was Ishani.”

“The beauty of doing an animation film was I had to basically create Ishani’s character, and her expressions were based on my expressions,” Priyanka adds. 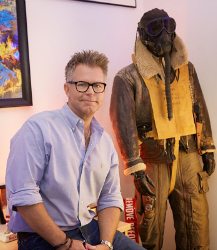 “I put in a lot of myself into Ishani. I think because she’s this tough girl in competing in the world of boys. She’s easy on the eyes, you know, but at the same time she’s tough and she’s a champion and I think that’s what I wanna be. A champion who’s easy on the eyes.”

However, Priyanka was adamant to not fall into the Hollywood trap as the typical Indian: “Because she was an Indian plane, I didn’t want to give her an exaggerated Indian accent which ends up happening in a lot of stereotyped Indian characters that I see.

“I wanted her to be the way we speak, you know, which is the way I speak. And [Klay Hall] was totally cool with that. But I did add a few Indian words here and there. Hindi words and expressions because I wanted her to be very unique to the culture that we come from. I wanted to keep it real,” she says.

Of course, Priyanka could never give up her Bollywood heritage entirely. In an exciting musical feature for audiences, Priyanka pays homage to B-town with a romantic song set over the Taj Mahal. 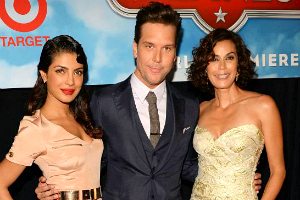 In the movie, her character Ishani breaks into Bollywood mode with the song ‘Fly High’ which of course is sung by Priyanka herself. The striking and mystifying Ishani is packed with surprises, none the less her sharp eye is always targeted on the prize. Priyanka says:

“From the first time that the team from Disney proposed that I sing ‘Fly High’, I was hugely excited. I love the song and believe that it is a great way to introduce audiences across the world to my character Ishani.”

At the California world premiere of the film, Priyanka stunned in a sexy pastel coloured jumpsuit and Hollywood side-hair. She was joined on the red carpet by the likes of Hollwood celebs Teri Hatcher, Hillary Duff and Dane Cook.

The DisneyToon Studios film will be released for the first time theatrically on August 9, 2013 but will be soaring into cinemas in the UK on August 16. The action packed 3D animated comedy adventure is one not to be missed this summer 2013 as the world of Cars takes flight.

Nadeera is a model/dancer hoping to take her talents further in life. She likes to carry her dance talent in charity functions and is passionate about writing and presenting. Her life motto is: "Live life over the top!"
Lucia screens at LIFF 2013
Chennai Express ~ Review