Premier Futsal is set to kick-off in India, and some of the world’s biggest sporting stars are involved. DESIblitz has all the details on the tournament.

Premier Futsal is set to kick-off in India on July 15, and will last until July 24, 2016. The prestigious tournament will combine legends of football and futsal for the very first time.

Some of the world’s biggest sporting stars are involved in the project, including Virat Kohli, Paul Scholes and Luis Figo.

The competition will bring together some of the finest futsal and football players from around the world. And with the players who have confirmed their attendance, it is promising to be a thrilling inaugural edition.

India will be the first country in the world to host a multi-national All-Star Futsal tournament of this sort. So what can we expect from this first of a kind competition?

Futsal is a 5-a-side game that is made up of two halves lasting 20 minutes each. Teams are permitted to make an unlimited amount of substitutions in this shorter form of football.

It is played indoors on hard court surfaces which are usually specially made teraflex pitches. Unlike traditional 5-a-side football, walls and boards are not used as the borders of the pitch are determined by lines. 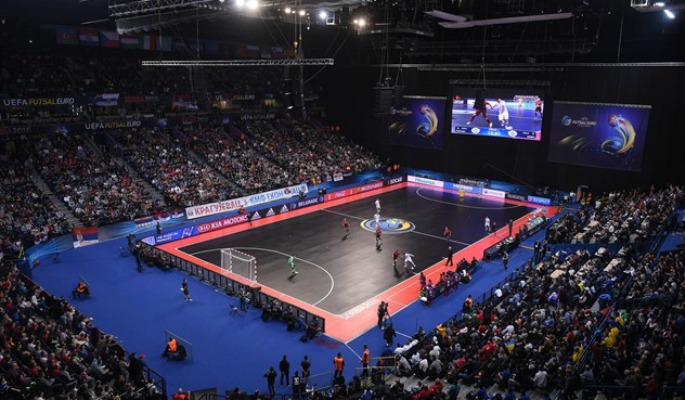 The game is played with a smaller ball (size 4) with less bounce than a regular football (size 5) due to the surface of the court.

The combination of the surface, the ball and the rules create an emphasis on the use of ball control, awareness, improvisation, technique and creativity.

Futsal has helped some of the biggest footballing stars of recent times, including Messi, Xavi and Neymar. Ronaldinho, arguably the most skilful player in football, says: “A lot of the moves I do were introduced from futsal.”

Premier Futsal will be an inter-city tournament between 8 teams who are representing eight major Indian cities.

Delhi, Mumbai, Chennai, Kolkata, Hyderabad, Bangalore, Cochin, and Goa are all competing to be crowned champions of the first season of Premier Futsal. Who will you be backing?

Can Hyderabad achieve an unprecedented sporting double of being IPL and Premier Futsal champions? 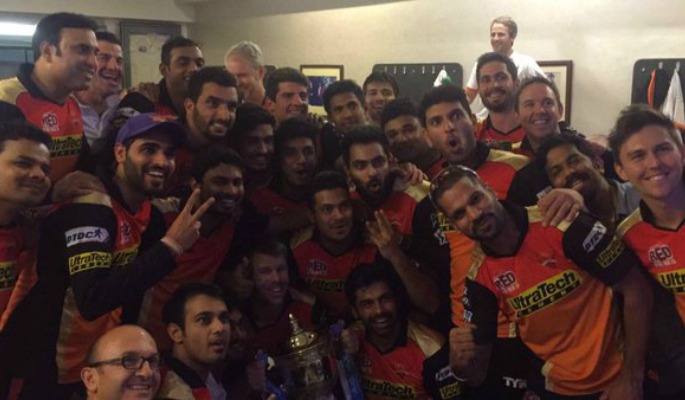 Teams will be split into two pools of 4. After playing each team in their respective group, the top two will proceed to the semi-finals. The two semi-final winners will then play out what is sure to be an epic final.

The Portuguese footballing legend, Luis Figo, is the president of Premier Futsal, which is governed by the Futsal Association of India (FAI). 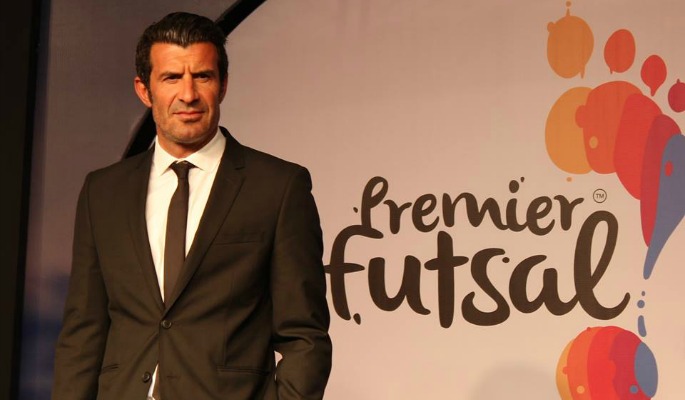 Each of the eight franchises will have a share of the 96 finest Indian and international futsal players. One marquee international football player will also be allocated to each franchise in the upcoming player draft.

In order to find 40 of the best Indian futsallers, the brand ambassador of Premier Futsal, Virat Kohli, launched a nationwide talent hunt. Of course the cricket star had some help.

Alessandro Rosa Vieira (39) who is more commonly known as Falcão, is described as the ‘Pele of futsal’. The Brazilian, who will himself be taking part in the competition, helped Kohli on his search for talent.

Falcao has been recognised as the World’s Best Futsal Player four times, and has signed a 5 year contract to play in India. He has scored 932 goals in 697 domestic appearances, and has 339 goals in 201 games for Brazil. 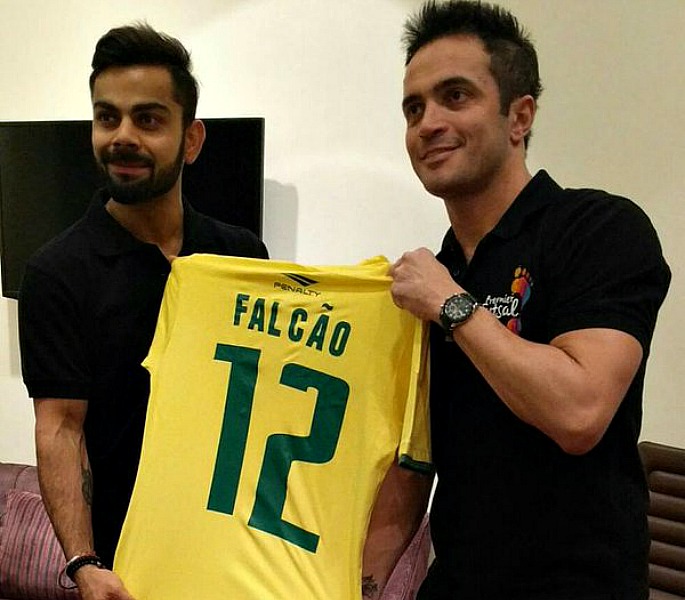 Three marquee international football players have confirmed that they will join Falcao in Premier Futsal. Between them, they have won a staggering 21 domestic league titles, and 7 major European trophies.

Luis Figo’s former Portugal teammate, Deco (38), was the first marquee player to sign up to the competition. Deco has won league titles in Portugal, Spain, and England.

Manchester United legend, Paul Scholes (41), then signed a 3 year deal to play in India. Scholes made 718 appearances for United, scoring 155 goals and winning an incredible 25 trophies.

Scholes says: “Premier Futsal will be a great way to introduce the sport to India, and I’m looking forward to meeting the fans across India.”

The latest player to sign up for Premier Futsal in India, is a former Galactico. Spaniard, Michel Salgado, won the UEFA Champions League twice with Real Madrid. 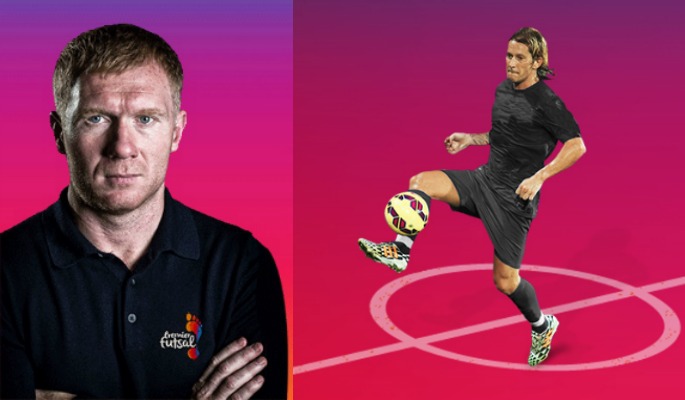 With five marquee players to be announced in the coming days before the tournament begins, who could we expect?

Alessandro Del Piero (41) and John Arne Riise (35) have both experienced playing football in India. Both Del Piero, and Riise, played for the Delhi Dynamos in the Indian Super League (ISL). With neither player currently committed to a team, we could see one, or both, in Premier Futsal.

Falcao could also be joined by another Brazilian legend, or possibly legends. Ronaldinho (36) and Rivaldo (44) have recently ended their associations with Fluminese and Mogi Mirim respectively.

The Dutch duo of Clarence Seedorf (40) and Edgar Davids (43) are other realistic marquee international players. Between them, they have won 18 domestic league and major European trophies, and would be excellent additions to Premier Futsal.

Some of the world’s best international futsallers will be joining Falcao in the tournament. 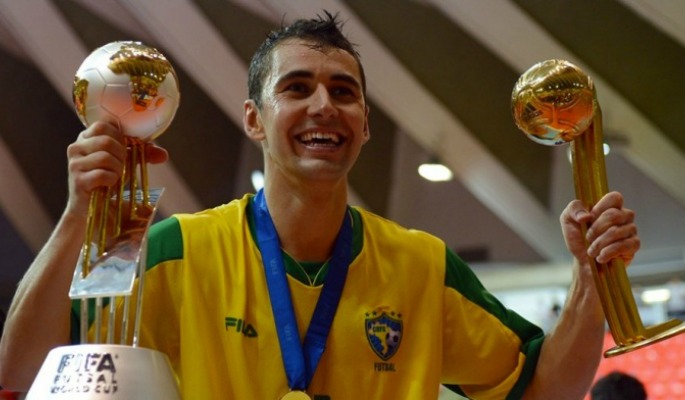 Dovenir Domingues Neto, the ‘Best Player in the World Cup’ award winner, will also be playing Premier Futsal. So too will Santiago Daniel Elias, the 2 time winner of the ‘Best Goalkeeper of the World’ award.

Several futsallers from Russia, Italy, Brazil, Argentina, and Iran have also confirmed their attendance. All of the futsal players have committed to Premier Futsal for 5 years, and will be assigned a team at the player draft.

“To have some of the sport’s most celebrated stars committing to play in the league for not one, but five years, is a massive vote of confidence for us.”

Indian football organisations are working hard to improve the state of the sport in the country.

The All India Football Federation (AIFF) have approved a restructure of professional Indian football. The changes will come in to effect for the 2017/18 season. Click here to find out more about the changes to football in India.

The tournament will be broadcast on Sony Six, Sony ESPN and Sony AATH. It will also be live streamed on Sony LIV.

Keiran is a passionate English graduate with a love for all things sport. He enjoys time with his two dogs, listening to Bhangra and R&B music, and playing football. "You forget what you want to remember, and you remember what you want to forget."
Women’s Kabbadi Challenge 2016 makes Debut
Hunza 2016 ~ First Official Marathon in Northern Pakistan