The Pakistani Women’s Rugby team made their international debut at the Asian Women’s Rugby Sevens. They competed against countries such as India and Nepal.

"I hope women in Pakistan look towards me and think if she can do it, I can do it."

The Pakistani Women’s Rugby team returned home after making a historic international debut at the Asian Women’s Rugby Sevens championship during the weekend. The event took place in Laos.

Despite winning only one match, the team has made headlines for women’s rugby.

The Asian Women’s Rugby Sevens took place from the 17th-18th February 2017. The Pakistani team made their debut in the event’s first match, against South Korea.

They competed in a total of six matches and won a match against Nepal with 17-7. Overall, they finished in 6th place.

The Pakistani team only joined up together a year ago. The country recognised the lack of sports opportunities for women. Therefore, Pakistani rugby officials encouraged both teachers and students in attempts to form a team for women’s rugby.

Now a year on, the team have made a memorable international debut at the rugby event.

Women’s rugby player Mehru Khan says: “For everyone it’s a huge deal that the women are playing rugby.

“First, that’s a big deal that women are playing rugby. And secondly that we are getting a platform to come and perform to represent our country.”

This debut of a women’s team, particularly in a contact sport such as rugby, breaks cultural stereotypes. Pakistani women can face many difficulties when trying to pursue a sport. Whether those difficulties come from family or even society as a whole.

The team’s winger, Fawzia Hayat told her story of becoming a rugby player.

She says: “My parents were more concerned about the possibility of injuries rather than me playing, but there were others who thought that this was a man’s game.”

Sadly, this misconception that rugby should be treated as a “man’s game” is very common. However, Fawzia says that after the team’s debut, those around her changed their minds:

“Now those people are the first to acknowledge our feat. My family is extremely proud to see me don the national colours and it is the same with other players in the team.”

It is hoped that the historical debut of the women’s rugby team will inspire more efforts to raise the profile of women’s sports. 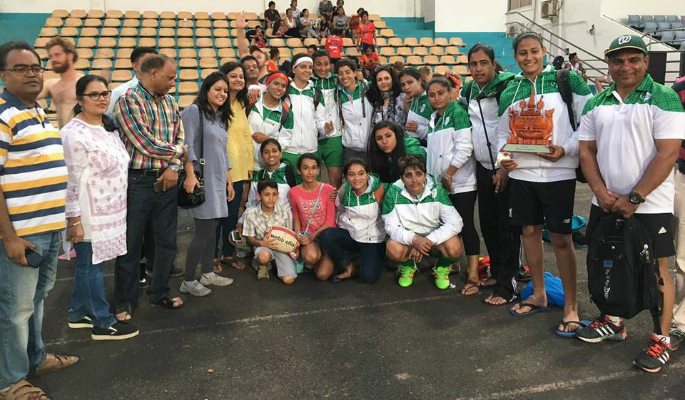 Pakistani coach Shakeel Ahmed will soon propose a two-year plan to get the women’s rugby into the Pakistan Rugby Union. This would create more opportunities for future international events.

Even the rugby players themselves want to take action. Mehru says: “I hope women in Pakistan look towards me and think if she can do it, I can do it.”

“I will go back and I will create a club in Lahore for girls. I will go to their houses and call them and play rugby because I don’t want them to feel they are less than us or than the boys or anyone.”

DESIblitz congratulates the Pakistani women’s team for making such a historical debut.