A Pakistani bride threw a Shah Rukh Khan-themed pre-wedding function in which all guests were to come dressed with masks of the actor.

“The Indian obsession is still on."

Guests were to attend the pre-wedding function dressed with masks of Shah Rukh Khan but there was a catch.

Each of the masks had to be of Shah Rukh Khan’s characters from his films.

Therefore, each guest turned up as a different character from the actor’s Bollywood films.

The Pakistani bride’s guests came wearing masks of Shah Rukh from his films such as Devdas, Raees, Don, and many more.

Arranged by the House of Shazia Cheema, the Shah Rukh Khan-themed dholki is quickly becoming the centre of everyone’s attention.

Whilst some found it cute, it also received backlash for using SRK as a theme for a Pakistani wedding function.

In reaction to the dholki, one user wrote:

“How foolish. This is a pathetic concept that is being promoted on social media.

“The Indian obsession is still on. Strange, and people promote this psyche.”

Another person said: “We as a nation are obsessed with India in every aspect – gone are the days when we were identified and appreciated rather than being compared to India.

“We have to come out of this phobia and we need to believe in ourselves instead of being obsessed.”

One user said: “Why is everyone spreading so much hate? If you don’t like it, move on. You don’t have to do the same for your dholki.”

Another added: “I don’t care what anyone says, this is so cute!” 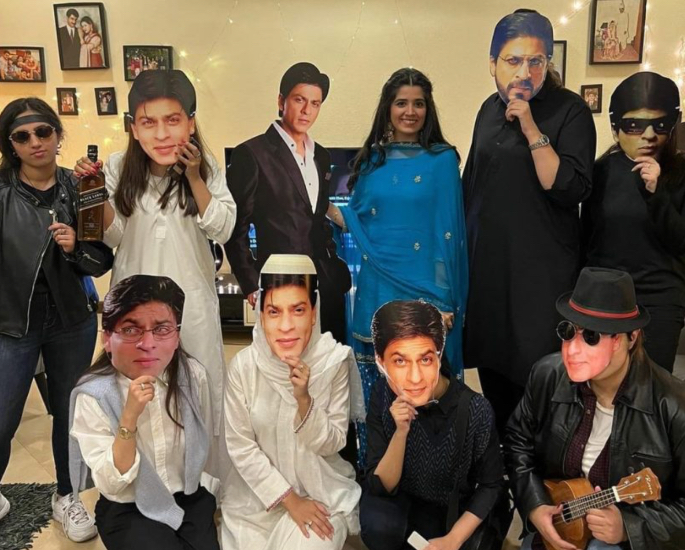 Following a hectic couple of months, including his son Aryan’s arrest, Shah Rukh Khan is set to return to work.

He was recently spotted in a gym to prepare for his upcoming schedule.

A source close to the actor said:

“It was a difficult period for Shah Rukh Khan and the family, and in that phase, the superstar was completely involved in the legal aspects letting go of all professional commitments.

“His diet plan and fitness regime had also gone for a toss in those 30 to 40 days resulting in loss of muscles too.”

“Now with things finally better, Shah Rukh has resumed work on his physique as both Pathan and Atlee’s next feature him in a larger-than-life avatar.”

The actor is expected to resume the shoot for the upcoming film Pathan from December 15, 2021, in Mumbai.

The actor will begin the 15-20 days filming schedule alongside his Pathan co-stars Deepika Padukone and John Abraham.

Ravinder is a Journalism BA graduate. She has a strong passion for all things fashion, beauty, and lifestyle. She also likes to watch films, read books and travel.
17 Indian Girls molested by Teachers after being Lured to School
Boris Johnson announces ‘Plan B’ to fight Omicron