A Pakistani artist is known for her work on sculpting women’s bodies and the meaning behind it, but she revealed she receives hate for it.

"my designs helped them see their bodies in a different way"

Pakistani artist Misha Japanwala revealed that she receives hate for her work on sculpting women’s bodies.

On Instagram, she flaunted her growing baby bump, wearing nothing but a white breastplate especially moulded to her body.

While breastplates have become increasingly popular on fashion runways, the one Cardi B wore was designed by Misha Japanwala, an artist who grew up in Islamabad but is now based in New York.

Misha said: “My Pakistani identity is deeply weaved into anything I create.

“In South Asia, women’s bodies are seen in a certain cultural context, and it’s difficult for women to have agency over their own bodies.

“Women I’ve worked with have told me that my designs helped them see their bodies in a different way and appreciate it.”

Despite the wider societal meaning her work has, Misha revealed that she gets hate for it.

She said: “I get comments and DMs daily that my work goes ‘against our culture’ or that ‘how dare I create such designs as a Muslim woman’.”

Misha previously spoke about the misogynistic comments she receives, from comments that say she is making “pervert art” to those who feel her work will “affect our morals and society”.

Misha told Vice: “The backlash and hate can be overwhelming sometimes, but I’ve realised that getting this kind of reaction only confirms that the work I’m doing and narrative I’m creating is especially important.

“It only shows that people are threatened by women taking charge of their bodies.”

The significance of her provocative art has been recognised by many, including Pakistan’s Aurat Collective who have called her a “trailblazer and inspiration for so many women in Pakistan”. 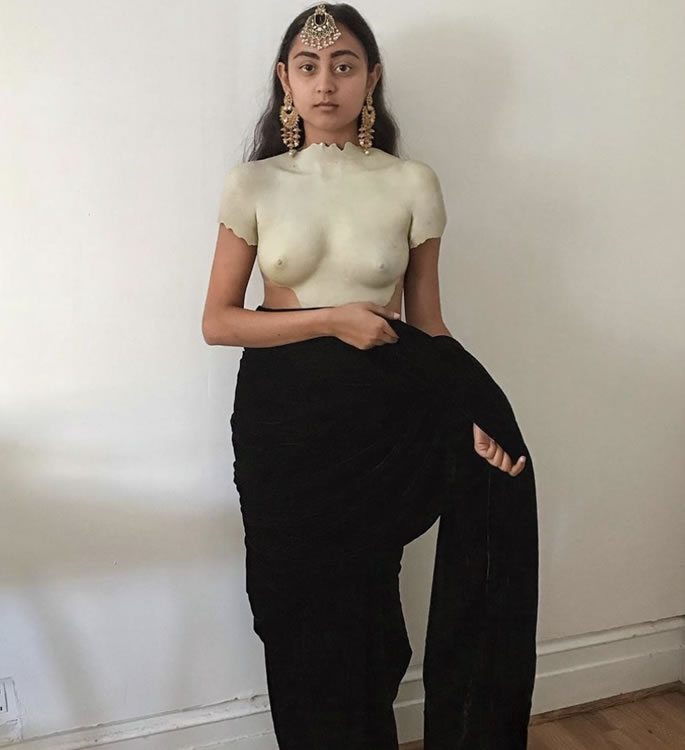 Journalist Hamna Zubair said she is a fan of Misha’s work. But she said that not all South Asian women would identify with it.

Hamna elaborated: “Since she lives abroad, she also has the physical freedom and safety as well as access to foreign influencers to create this work, which many women living in South Asia may not have.

“And in that way, Misha’s success is also a sobering reminder of how much work needs to be done in South Asia to support the arts.”

Misha is known for her signature body casts that are moulded to the curves of each body they envelop.

For the Pakistani artist, her work is a form of rebellion against the patriarchal society she grew up in.

She uses her platform to raise awareness on issues of violence against women.

“A lot of people look at my work, take it at face value, and think that I’m promoting nudity.”

“But my work is actually about allowing women to be themselves fully and make decisions for themselves.”

“While this is needed all over the world, I think it’s even more relevant as a Pakistani woman, especially when we have a prime minister who makes statements that basically validate violence against women by victim-blaming [rape survivors].

Misha has gone on to appear in the Forbes 30 Under 30 Asia List.

Through her art, she is also exploring her own identity and feelings of self-acceptance.

Misha said: “It’s been a very important self-love journey for me.

“Like most other women, I have always been extremely critical of my own body, and creating these pieces and putting myself out there has been a huge process in accepting myself, while allowing me to connect with other women and create a collective of support.”

She said: “I’ve been trying to establish myself in the art and fashion scene for the last few years, but I think my work was noticed by Kollin Carter, Cardi B’s stylist, because of Reva Bhatt, an Indian-American stylist who had assisted him before, and [who] wanted to give more opportunities to South Asian designers like me.

“There’s a great sense of community and upliftment.”

But her work is not limited to South Asians, she also addresses abortion laws and violence against women in the United States.

Misha added: “I try to talk about issues affecting women in different parts of the world.

“I feel we need to uplift each other and rally together to empower change.”

Dhiren is a journalism graduate with a passion for gaming, watching films and sports. He also enjoys cooking from time to time. His motto is to “Live life one day at a time.”
Odisha Visual Artist wins coveted UAE Golden Visa
10-year-old Boy writes 30-Chapter Book during Lockdown