Ourscreen your own Personal Cinema

A great new American concept has arrived in the UK; film fans can now enjoy classic movies on the big screen at their own leisure. Ourscreen offers a personalised experience allowing you to choose what you want to watch at the cinema, when you want to.

"We wanted to build something that enabled more people to watch more films in the cinema."

If you love movies then get ready for an exciting new experience coming to a cinema near you. Ourscreen is an innovative new concept in the celluloid world which puts you, the viewer, in charge of which movie you want to watch at the cinema you want to watch it in. 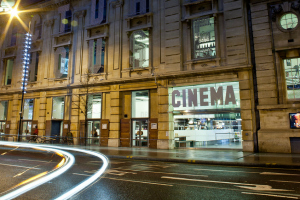 With all sorts of social media platforms available, it is very easy to invite your friends network using Twitter, Facebook or WhatsApp.

It’s the type of wild experience you could create to enjoy a great birthday party, or any group occasion. Imagine telling your friends that you had rented a cinema for an evening to celebrate your birthday?

They’d think you had just received an inheritance or won the lottery. On the other hand, you could just as simply organise a night out with all your friends to spend some much needed time together.

The Ourscreen experience is based on an idea by Director David Kapur. Conceived in the USA, the concept has become hugely popular in Los Angeles and New York and now the UK is Ourscreen’s next destination.

David Kapur says: “It’s a journey that started almost three years ago and it is so exciting. The inspiration was to try and create a piece of digital technology that supported the great work being done in cinemas across the UK.”

“We are a small group of cinema fans and wanted to build something that enabled more people to watch more films in the cinema. Nothing beats a great film on the big screen.

“We have our own personal taste in films. But this is about democratising cinema so we need a range of films and a range of cinemas. This is people-powered cinema!”

A screening can only be booked once enough tickets are sold, which, in turn, affects the price of the tickets. This means the more friends you bring along, the cheaper the seats will be.

However, if only a few of you want to go you will have to wait until Ourscreen confirm the minimum number, and once that’s established, they then tell you the date and time of the performance. As David adds: “Film fans right now, are programming seven amazing cinemas across the UK.”

Currently there are only a limited number of cinemas available in the UK which offer the Ourscreen experience, including London, Norwich, Brighton, Liverpool and Edinburgh. But there is a plan to roll out cinemas all across the country very soon.

The Ourscreen library consists of around 200 movie classics like Blazing Saddles (1974), Blue Velvet (1986), Deliverance (1972) and the Tom Hanks blockbuster, Captain Phillips (2013); but also 2014 thrillers like Borderlands. More titles will be added as theatre numbers are increased.

Ourscreen will be asking the public to contribute by requesting what films they want to see and in what theatres.

This idea will no doubt in the future also inspire them to show some International favourites from a South Asian perspective, maybe like the following classics:

With so many titles on hand already, this is a great opportunity for movie fanatics who love watching their favourite films at the cinema. Some films can only be enjoyed on the big screen of a cinema hall as opposed to at home; for that simple reason, Ourscreen offers a personal and unique experience that will stay with you for a very long time.

So, if you’d like to see your latest Bollywood blockbusters, or even an old one, at a theatre near you, then please contact DESIblitz with your suggestions and we’ll pass them on to the Ourscreen team. In a way, it is the perfect vehicle to revive all of the old Asian masters. This could be the future to revive Bollywood films and classics you might have missed!

Possessing a wicked sense of humour Tim has travelled the world indulging in every culture and enjoys life to the fullest. His motto is "Carpe Dium" or "Seize the day"!
Rotimatic ~ the automatic Roti making device
Highlights of the Gadget Show Live 2014