A photographer based in Mumbai has produced a fashion shoot inspired by the 2012 Nirbhaya gang rape in Delhi. The pictures have been criticised across India and has also invited a worldwide on-line debate.

‘The Wrong Turn’ depicts a female model attempting to avoid the advances of several male models.

An Indian fashion photographer named Raj Shetye has uploaded an editorial shoot to his website which is clearly inspired by the 2012 gang rape of a student in Delhi, as she was travelling on a bus.

The incident caused widespread protesting across India and the world, with the victim herself becoming known as Nirbhaya, meaning ‘fearless’ due to the suffering she endured.

This assault and the resultant public debate contributed to the tightening of India’s anti-rape laws last year.

The Mumbai photographer titled his shoot ‘The Wrong Turn’, and it depicts a female model attempting to avoid the advances of several male models.

The men surround her on a public bus, and viewers have immediately drawn parallels between the staged scene and the reality of the student’s rape.

One image features the female model on the floor, whilst a male model stands over her. 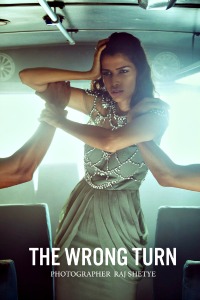 There are also photos of the woman struggling with men holding her arms, and being pinned down to a seat by the male models.

Shetye has told the Mumbai Mirror that he formulated the plan for the shoot last year, because he wished to make a statement through his art about the position of women in India.

He said: “It breaks my heart to see my mother, friends, and sister constraining themselves professionally and personally just to be safe.”

He also stressed that his photos were not about any sort of commercial gain:

“The garments worn by the models are by top designers but I’ve not given them credit publicly because the intent wasn’t commercial gain but to garner public opinion.”

Shetye has stated that despite the parallels many have drawn between the 2012 assault and his fashion photography, he insists that his work was not based on the incident.

He said: “The shoot is not based on the Nirbhaya incident. It is just a depiction of the situation of women in our country right now.”

However, many in the fashion and photography community in India have come forward to deem the shoot as insensitive, saying it glamorises a serious issue.

Nachiket Barve, an Indian designer, acknowledged that Shetye may have been attempting to highlight the treatment of women in his country, but still criticised the photos: “I think it’s a case of really bad judgement, a loss of perspective. Some creative people, in pushing the boundaries, overstep them.”

Amit Ranjan, an Indian model, was more overt in his critique: “I get how photography is an art and is open to interpretation. But this is completely distasteful.” 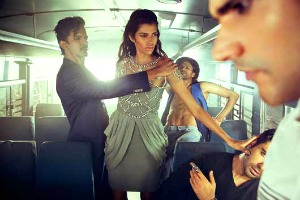 Since these initial comments the debate has only grown, with more people taking to Twitter and Facebook to discuss the fashion shoot and its message.

Shetye has also removed the photos from his own website following the backlash from on-line comments and the Indian media.

The photographer continues to reiterate that his intention was not to glamorise rape, saying: “The aim is purely to create art that will garner public opinion about issues that concern women.”

Yet in a country where rape is not just a sensitive issue, but a very widespread one, many feel that this fashion shoot is insensitive.

Art can draw attention to many issues, and contribute to debate about difficult subjects.

However, the reception to Shetye’s fashion shoot suggests that he has misjudged this situation and produced art which many feel does not communicate the right message.

Eleanor is an English undergraduate, who enjoys reading, writing and anything media related. Aside from journalism, she is also passionate about music and believes in the motto: “When you love what you do, you’ll never work another day in your life.”
Lakmé Fashion Week Winter/Festive 2014 Preview
Top Skirt Trends for 2014