Back in 2011, Yorkshire-born author Shakeel Aziz had the idea to write a self-help guide for British Pakistani teenagers.

The aim was to create a ‘Do’s and Don’ts’ leaflet and then talk about these issues to young people through a youth project that he participated in.

However, he realised that young people wouldn’t be interested in a blunt and rigid advice guide. So Aziz decided to write an action crime thriller novel with all the advice and issues included.

A self-help guide may seem like an odd start for a crime novel from a man who describes himself as a ‘confused, intelligent rebel’, but Aziz freely admits that he wasted his chances at school by mixing with the wrong crowd.

DESIblitz has a chat with the man himself to find out the inspiration behind his new publication.

You have written on a lot of what would be considered to be Taboo subjects about the Asian community. How important do you think it is to raise awareness of such issues? “The first step to tackling issues and challenges is to identify, then to highlight/raise awareness and then to practically develop strategies to tackle the issues. It is absolutely crucial to raise awareness on issues, especially within tight knit communities to root out problems.

How serious of an issue is sexual grooming among the British Asian community?

“It is definitely not as serious in terms of an epidemic or large scale and wide spread issue which some media outlets have proposed, however the sexual exploitation of young girls does exist.

“There is a very small minority of Pakistani males who have total disregard and disrespect for human life, they are deeply misogynistic and they are evil criminals.

“The street grooming crime is made up of what I call a ‘tragic sociological combination’. This is because on one hand of the problem we have a section of society in which there is a collapse of family structures.

“On the other hand we have a minority of Pakistani men who are involved in street crime and have access to flats, cars, drugs and alcohol. Bring these social problems together and the outcome is sexual grooming and exploitation.”

Why did you decide to write Dons of Bradistan?

“I wanted to write a book based on what I know, and issues which need to be opened up, all wrapped up in the in the mysterious world of young Asian boys and street gangs in the city of Bradford.”

“I hope to highlight and bring to the surface some interesting and serious topics. Also to give the young British Pakistani’s a voice and platform via the novel, because we are always talked about, but very rarely listened to or talked to.”

Have you received any negative reception from the Asian community?

“More positive than negative. Some people who are slightly out of touch feel that raising awareness and talking about ‘controversial’ subjects is bad for the communities.

“However the majority of people accept and applaud the fact that young British Pakistani’s like myself are taking a stance and taking action, instead sitting around inactively complaining and blaming others for our own short comings.”

What kind of struggles and barriers are the younger generation of British Asians facing today? “A lack of self-identity leads to insecurity and aggressiveness. The animal instinct of survival is based on the premise that an animal will attack when it is threatened or when its territory is under attack. I would argue that this very similar to what is happening to young British Asians. It is leading to a cultural and psychological schizophrenia.

“We are born, educated and wholly ‘British’. We have British morals and values, we speak English as our first language and we are born and bred British citizens.

“On the other hand we are also raised in households and communities who are deeply traditional and culturally loyal to South Asian mentality and rituals.”

Do you feel that older generations of South Asians are at some kind of fault for not integrating with British society enough?

“Yes, although this may not have been intentional. The first generation of migrants, such as my parents arrived in the UK with no long-term plan to stay and settle here so integrating was not considered important.

“As time progressed, the communities became financially and practically dependent and tied to the UK, instead of returning to the homeland in South Asia. The older generations had created intra communities which were and still are insulated from the wider society.

“There was also the problem of language and cultural barriers. The first generation of migrants were uneducated labourers who had no understanding or knowledge of the new world which they had arrived in. 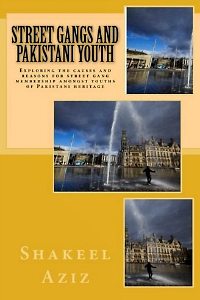 “The only solution for them was to stick together, create strong close knit communities and help each other to survive ‘in this foreign land’.

“Then came along the new British Pakistani’s (us) who are born in English hospitals, delivered by English nurses and taught in English schools, and the wheel of integration started.”

Do you feel that gang culture and racism is an inherent part of every deeply-rooted culture or ethnic community?

“I feel that unfortunately we as humans are more inclined to show loyalty to ‘our own kind’ as oppose to being fair and equal regardless of one’s back ground. Deeply rooted communities might be over protective, but this does not always translate into racism.

“Older generations were happy to work 17 hours shifts in unbearable work conditions rather than be criminals, however with globalisation and modernity, these morals and values were slowly eroded. The new generation (post 1990’s) developed a mind-set in which gang culture and crime became paradoxically ‘cool’ and acceptable.

“This has a lot to do with the rise of media access, movies which portrayed the gangster lifestyle as something attractive and rewarding, and perhaps the most influential which still continues to damage young people is a hardcore, explicit version of rap music which glorifies and encourages crime, gangs and violence.”

Fans of the author will be pleased to discover that Dons of Bradistan part 2 is on the horizon due to popular demand. Aziz has also released a mobile app called ‘Sexual Grooming Awareness’ which is available on Google play store and iTunes.

It takes a brave man to pen his first novel on such a controversial and taboo subject, but Shakeel Aziz is adamant that these issues are heard. All work done by Aziz is available on Amazon.

Jess is a journalism and creative writing graduate with a passion for learning new things. She loves fashion and reading and her motto is: “If you want to know where your heart is, look at where your mind goes when it wanders.”
Experience Hong Kong
The Dialects and Languages of India