Priyanka Chopra the Bollywood stunner has won the prestigious Indian National Award for her role in Fashion. A surprise win that is very special to her.

the National Award is most special

Priyanka Chopra won the Best Actress award at the 56th Indian National Film Awards. She has won her first ever National Film Award for her performance in “Fashion, a film by Madhur Bhandarkar. The 56th awards celebrate the cinematic works for the year 2008, picking out the films and individuals achieving and credited with national success.

Although Priyanka has already won several awards, including a Filmfare Best Actress award for her characterisation of a struggling model in ‘Fashion’, she says the surprising win of the National Award is most special.

Priyanka is in the midst of shooting for Siddharth Anand’s “Anjaana Anjaani” in New York, USA. Elated at the news about her win, she said, “This is a National Award! I was just not expecting this and especially because there are several regional films and actors competing for it. One can’t keep track of the nominations at all. But this feels just great. After having won 15 awards for ‘Fashion’ so far, I feel I have come full circle with this one.”

“It is one of the most revered and the biggest honours in India and I am so excited to be getting one in such a short span in my career.” 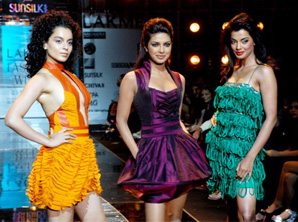 Priyanka’s phone had been ringing most of the morning in New York after the news broke and she said, “My father called me up and said he is ecstatic and extremely proud of me. He had tears again. He is happy because I have achieved so much in such a short span of my career, and that makes him really proud.”

Kangana Ranaut won the Best Supporting Actress award for playing the role of a troubled model in the same Fashion too.

In total, Bollywood bagged 12 honours at the 56th National Awards.

The Best Supporting Actor award was won by Arjun Rampal, for his role as a failed rocker in “Rock On.” This film also won the Best Hindi Feature film in the language category. 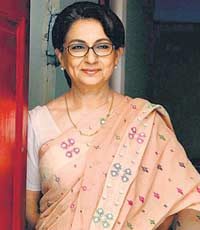 The Bengali feature film “Antaheen” directed by Aniruddha Roy Chowdhury was voted the best movie. The film is a story about relationships starring Sharmila Tagore, Rahul Bose and Aparna Sen.

Neeraj Pandey won the Indira Gandhi Award for the first film of a director, for his thriller, “A Wednesday,” starring Naseeruddin Shah and Anupam Kher.

A film about a Mumbai Parsi community called “Little Zizou” by Soni Tarporwala community was given the Best Film on Family Values award and the Nargis Dutt Award for Best Feature Film on National Integration was won by an Assamese movie called “Aai Kot Nai” by Manju Bora.

A Sreekar won the Best Editing award for a film on the aftermath of Gujarat riots in the year 2002, called “Firaaq” directed by Nandita Das. Best Art Direction for Gautam Sen. The film stars Naseeruddin Shah and Sarika in lead roles.

Nazhat is an ambitious 'Desi' woman with interests in news and lifestyle. As a writer with a determined journalistic flair, she firmly believes in the motto "an investment in knowledge pays the best interest," by Benjamin Franklin.
Aamir Khan triumphs with 3 Idiots
Bollywood ‘Striker’ free on YouTube