Man Sacked from Job returns with Gun & Shoots at Co-workers

Beant Singh, from California, got fired from his job. He left only to return with a gun and pointed it at his former co-workers. Singh then shot at them.

"I'm going to come for your family. You don't know what I can do."

Beant Singh, of San Joaquin, California, USA, was arrested after he was fired from his job and then returned to shoot at his co-workers with a gun.

Even after he was arrested, Singh made threats that he will come for them and their families when he is released.

Although the incident lasted a few minutes, scared employees said that it felt like the longest minutes of their lives.

Singh had finished his final day with Dhaliwal Bros Carrier, a local trucking company, as he had been sacked.

He left his former place of work but then returned with a gun. The incident was captured on the surveillance video.

In the video, Singh pulls a gun from his waistband and points it just inches from his former employer’s face.

Sukhjinder Singh, the business owner, said: “I’ve never seen a gun you know like you see in the movies, but not like actually somebody pulling a gun on your face.

“I honestly couldn’t even breathe. He was saying, ‘I’m going to come for your family. You don’t know what I can do’.” 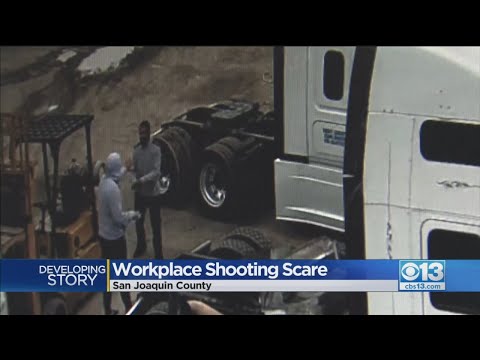 Sukhjinder did not know why Singh snapped in such an extreme way, but when other employees tried to calm Singh down, he allegedly turned on them.

Singh told them: “Don’t move I will shoot you too.”

According to a statement from the Sheriff’s Office in San Joaquin, Singh fired a round at two employees but did not hit them.

As he left the scene, Singh was not done with his threats towards his former colleagues.

“He told employees that even if he was arrested he would be returning to handle what he started.”

Police arrived at the scene and later tracked down and arrested Singh.

They seized the gun and he was charged with felony, assault with a firearm and making criminal threats. He was taken to the county jail.

While he has been arrested, his alleged threats still continue to terrify his former co-workers.

Mr Singh added: “I was really scared. And I’m still scared if this guy comes what’s going to happen.

“I have a 4-month-old baby. Of course you’re scared for him… I have a family. Who’s going to look after them if anything happened like that?”

Mr Singh filed a temporary restraining order against the suspect to protect his family and his employees. It is valid for three years.

All of the employees are planning to file a permanent restraining order once Singh has been released.

Dhiren is a journalism graduate with a passion for gaming, watching films and sports. He also enjoys cooking from time to time. His motto is to “Live life one day at a time.”
Indian Man shoots himself in Genitals at Wedding
Shopkeeper punched in Face by Youths Stealing Fanta