DESIblitz.com exclusively met up with the one and only Asian female YouTube sensation in 2012 who hails from Canada and goes by the name of Superwoman aka Lilly Singh.

"there are a 100 lovers for every hater"

AKakaAmazing, FouseyTUBE, JusReign. There’s no doubt these names sound familiar amongst the majority of Desi people nowadays and they’ve most certainly seen or heard of them at some point. The trio share two things in common: the first being YouTube and the second the fact they create entertaining home-made videos poking fun at anything and everything related to South Asian culture.

These YouTube comedians now have a large global internet fan-base having received over a million video hits claiming YouTube success each in their own right. 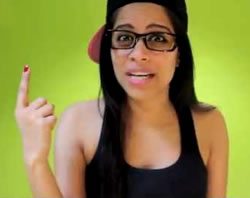 But have you ever noticed the lack of female YouTube entertainers? With all of the stiff male competition, it’s hard to give anyone a big break in the world of YouTube. But one girl in particular proved that theory wrong!

When you really want to do something, whether it be getting a degree or making people laugh on YouTube, if you’re determined and passionate enough you can achieve it. At least that’s what Lilly Singh believes.

In the competitive world of YouTube entertainers, Toronto’s very own Lilly Singh, or commonly known by her alias name ‘Superwoman,’ has built a presence on YouTube, one video at a time. From dressing up as a guy and showing situations through a female point of view to featuring her adorable grandfather in her videos, she does it all.

So if you’re looking for some dating advice? Feel like you can’t talk to anyone about the typical Asian family mishaps? Or are you just having a bad day and really need to be cheered up? Don’t worry, Lilly will take care of you. All you have to do is visit her YouTube channel (youtube.com/iisuperwomanii) watch one of her videos and guaranteed you’ll have one big smile on your face by the end of the video. 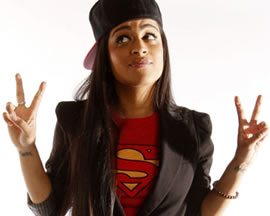 Most people know Lilly Singh solely as the girl who makes humorous YouTube videos to entertain her fans but little do they know that this young talent has not only achieved a degree in psychology, but in her spare time when she’s not doing photo-shoots, travelling or getting all glammed up for an event, this young lady is a spokesperson.

Yes, that’s right a spokesperson. Lilly’s main message is targeted towards females; she helps girls tackle confidence and self-esteem issues. She’s been asked to speak at numerous schools where she motivates individuals to be themselves, be confident and to never give up.

“My past experiences have shaped me too well to be affected by that. At the end of the day there are a 100 lovers for every hater,” says Lilly when talking about how she is not phased by viewers who make derogative comments.

For those of you who wish to know Lilly a bit better, or be introduced to her for the first time, we have great news for you! DESIblitz’s had the opportunity to catch up with the rising talent in Toronto and ask her a few questions.

Lilly talked about it all; from how she started out on YouTube, showing off her amazing tattoos, to speaking about marriage and what is to be expected in the future from the rising YouTube star.

When asked about what inspired her to make YouTube videos, Lilly replies:

Lilly shows complete modesty when talking about the fans she has made. It does surprise her and says: “Some people are shaking literally to meet me and say you are my role model and I say you need higher standards my friend!” She has even had a guy get down on one knee and propose to her on the street.

And what is the reaction of her parents to her popular YouTube appearances? “They are really really supportive but sometimes they say I can’t believe you actually said that! Sometimes it is a bit awkward to see my mum watch my videos when I’m dressed up as a guy and stuff!”

For us to meet one of the new wave of self-made stars of YouTube was a great pleasure and we know that there are many more who are gaining momentum on the most popular social video website. However, Lilly Singh has made her special mark and we totally support her initiative and creativity as a Desi YouTube sensation.

Neha Lobana is a young aspiring journalist in Canada. Besides reading and writing she enjoys spending time with her family and friends. Her motto is "Live as if your were to die tomorrow. Learn as if you were to live forever."
Get Ready for Digital Money
Top International Calling Cards