The Amina Khayyam Dance Company put on a masterclass in their Kantha Katha-K performance which tells the stories of women during Covid-19.

"It is a beautiful piece with its roots in real life"

Amina Khayyam along with other dancers from her company have astounded in their Kantha Katha-K performance that took place at the Birmingham Hippodrome.

In front of a jam-packed audience, the group of four displayed a range of athletic abilities and dancing expertise.

The 40-minute choreography was inspired by a creative project that involved the experiences of women during Covid-19.

In its foundations, women of South Asian descent would use Kantha, a traditional form of embroidery to stitch their stories of sadness, loneliness, abuse, hope and resilience.

Amina Khayyam told DESIblitz the importance of such a project was because:

“Many of our participants live in difficult circumstances such as domestic violence, poverty, mental health, and small restricted housing with extended families.

“They found the project rewarding. It allowed them to keep occupied, busy and connected during the lockdown.”

“It was a creative process that helped with mental health well-being, communication skills, and expressing freely.” 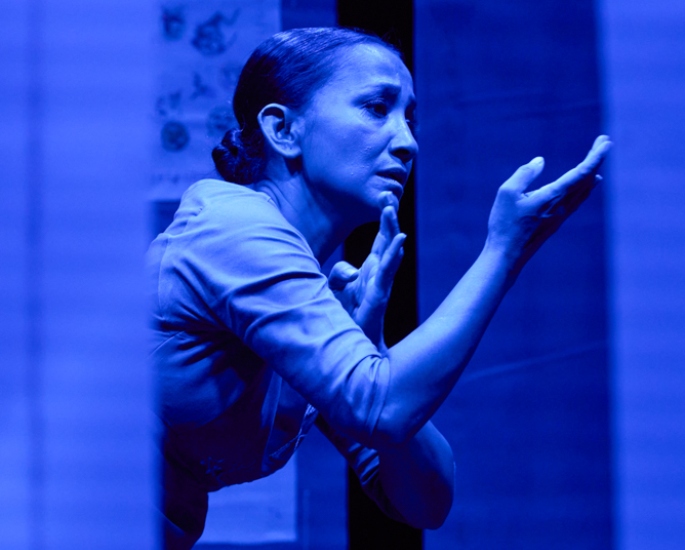 It’s this unity and heartfelt emotion that led to a beautiful routine, choreographed by Amina herself. Dancers Jane Chan, Abirami Eswar and Sushma Vala made up the group.

The music was composed by Jonathan Mayer and adapted from Bordin’s ‘Nocturne’. It was expertly played by a live band which included a sitarist, singer and tabla player.

A darkened room with spotlights, the embroidery work of the women involved and the central stage set the scene for the routine to blossom.

Before the show started, Amina detailed the motivation behind the whole project and explained the gravity of such stories coming to life.

As the band elegantly started, the dancers produced joyous and vibrant moves. Each one resonated with the other, and they all intertwined nicely. 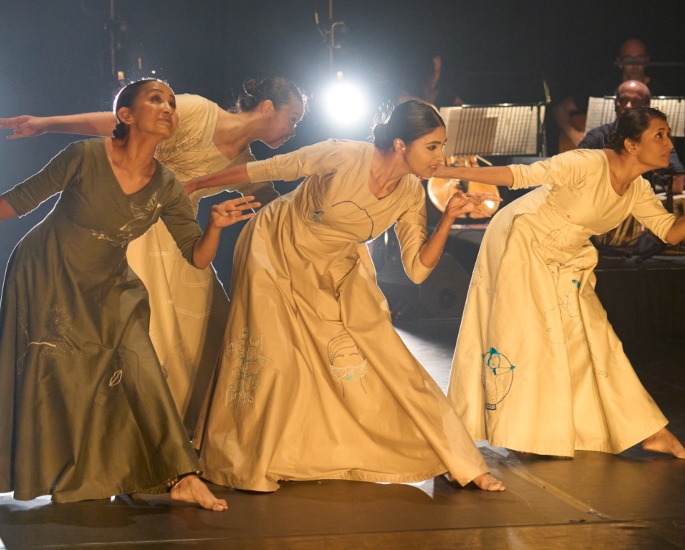 Sometimes the performers would split across the stage for the audience to witness the different twirls and then join back up in the middle.

It created an immersive surrounding where the dancers would be right in front of you, beside you and sometimes, even behind you.

The intricate Kathak dancing was mesmerising and each part of the routine added a layer to the overall story.

With balanced spins, expressive hand gestures and emotive body movements, the dancers were able to transition into the different experiences they are trying to present.

Perhaps the most engaging part of the performance was Abirami Eswar and Jane Chan’s piece towards the end of the show.

It seems Abirami was telling the story of someone overwhelmed with grief and sadness.

Jane assumes the position of her consciousness, standing directly behind Abirami with barely any distance.

One of the standout movements was Abirami trying to break free on a number of occasions.

Both dancers would perform a groove and then with her hands spread out wide, Abirami would attempt to escape but Jane would pull her back in and then they would dance together again.

This expertly highlighted how many women were secluded in their homes during Covid-19.

Surrounded by loss and suffering, no matter how much they tried to escape, they couldn’t and would get pulled back in.

For some women, they experienced death within the family and this was also carefully orchestrated within Kantha Katha-K. 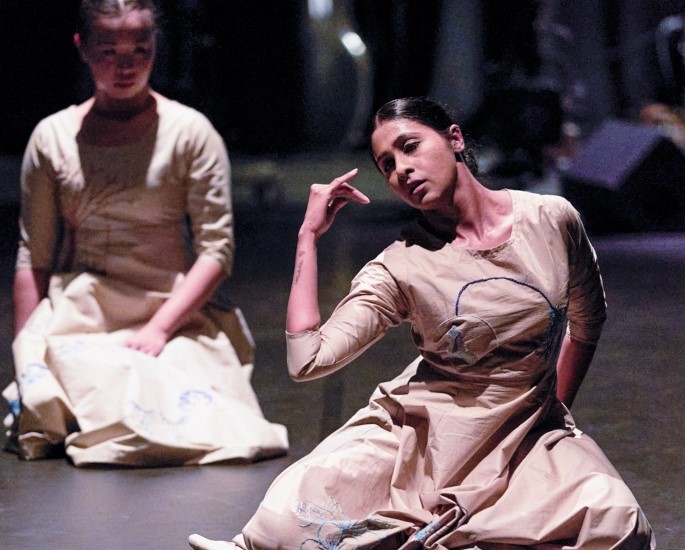 However, some parts of the storytelling were unintentionally lost due to the large installation pieces of the embroidery work.

Some of the dancers performed within these long pillars and whilst the meaning of this was acknowledged, some of the audience’s sight lines were blocked.

But, in the grand scheme of things, this didn’t hinder the impact of the show.

As writer Rachel Louise Martin alluded to in her opinion of Kantha Katha-K:

“It is a beautiful piece with its roots in real life and real people’s feelings.

“And the artwork created through this project is an extension of the performance; they complement each other successfully.”

The dancing was great and never lost its energy. The way the dancers were able to fuse different emotions and journeys without losing momentum was impressive. 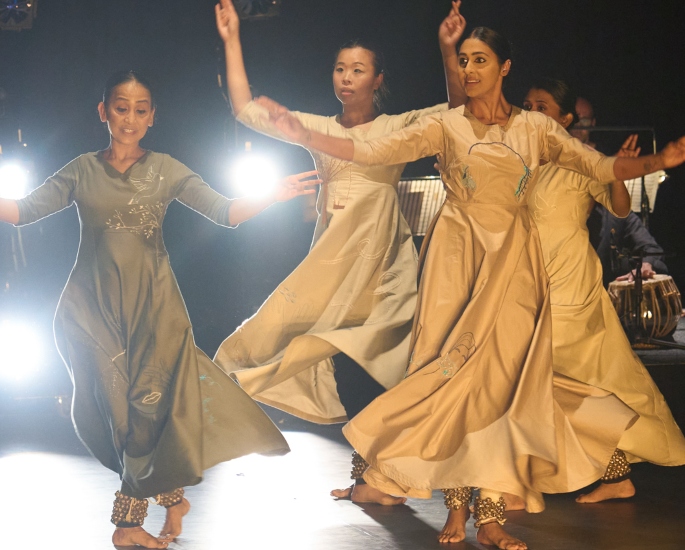 However, it’s important to note the tremendous role the band played in the show.

The tabla and sitar were so vivid and provided different tones that hypnotised your senses. It was sombre, brash, hard-hitting but also delicate.

The cello and modified guitarist aided the traditional Indian instruments and provided undertones of percussive attitude.

Not to mention the fantastic voice of Sohini Alam that brought forward such warmth in the latter part of the performance.

One becomes accustomed to the music score but as it suddenly halts and Sohini’s vocals break through, it graces the walls of the theatre and your ears, placing you in the richness of South Asia. 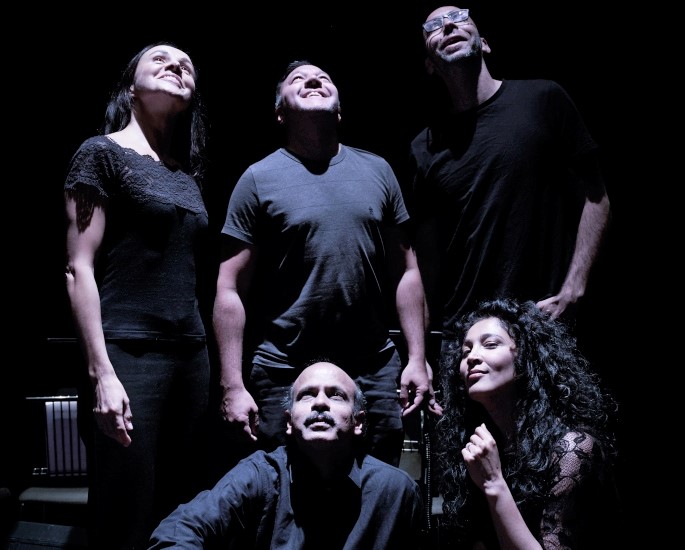 All in all, the intimate nature of Kantha Katha-K makes it a unique viewing experience.

Audience members are diverse but the universal nature of the choreography and message reminds you of the fright around Covid-19.

In her own words, Amina Khayyam told DESIblitz how she wanted viewers to feel seeing the show:

“For the women participants – we hope to have done justice to their stories and were able to give them a voice.

“We hope we are able to transform their work through movement and have done justice to their thoughts and emotions felt during the pandemic.

“And for the general audience, we’d like it to be a reminder of how fragile life is.”

Kantha Katha-K is a thrilling showcase of a traditional dance form done by some of the most enriching performers.

All equally equipped with amazing talent, skill and storytelling abilities, they bring the tales of women to life.

It’s a show full of drama, happiness, entrapment and uncertainty. But, it certainly succeeds in its ambition.

‘Lands of Belonging’ tells the Rich History of South Asia
A Review of Rakhshan Rizwan’s ‘Europe, Love Me Back’