The inaugural Just Bollywood is set to launch on 13th December 2014. A simple idea by a handful of students at Imperial College London has catapulted into a nationwide brand that is set to revolutionise the UK Bollywood dance scene.

The winners will get to perform at next year's Bollywood Showstoppers.

Bollywood dance is a fusion of many diverse styles, including ballet, bhangra, Bharatanatyam, hip-hop, street, and salsa. Each performance is a unique artistic challenge for choreographers and performers alike.

The storytelling aspect, which is synonymous with Bollywood, further distinguishes each performance, and makes the performances more lifelike and memorable.

Moreover, the incorporation of numerous styles has allowed people from different ethnic and dance backgrounds to take an active interest in participating in Bollywood dance on a global scale. 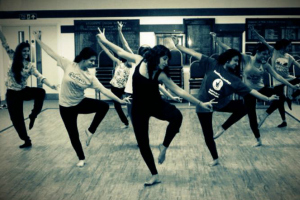 Just Bollywood is being organised by the Imperial College Indian society, whose president Sudeep Biswas, says:

“The amalgamation of different dance forms, themes, music, and dialogues is what makes a Just Bollywood act stand out from any other Bollywood dance act.”

He adds: “13th December 2014 will mark the day when universities nationwide will be clashing head to head to be crowned the UK’s Bollywood fusion dance champion.”

The winners of Just Bollywood will also get the opportunity to perform at next year’s Bollywood Showstoppers. The annual dance extravaganza has attracted Bollywood icons, singers and celebrities including Shahid Kapoor, Bipasha Basu and Sonakshi Sinha. This year the event was hosted at the O2 arena, entertaining an audience of 15,000.

“We are all very excited about Just Bollywood. It is the first real chance to put Cardiff Asian society on the map and be recognised as a culturally diverse university through our passion and love for dance.”

Adding to the competitive spirit of Just Bollywood, each university has a Hollywood actor as their theme (such as Leonardo DiCaprio or Richard Gere) and a prop (umbrellas, hats, etc), which each team will be incorporating within their dance set.

The judges of Just Bollywood are the dancing maestros Karan Pangali, Leena Patel, and Samir Bhamra. 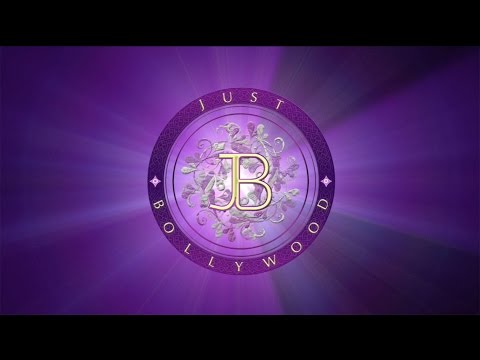 Dance sensation and artistic director of KSPARK entertainments, Karan Pangali catapulted to fame as the only British dancer to make the final of Hrithik Roshan’s Just Dance competition. 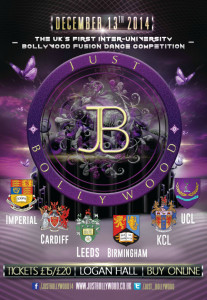 She is also the lead dancer of BollyFlex, a Bollywood dance group that made history by being the first of its kind to perform in Strictly Come Dancing.

BollyFlex also made it to the semi finals of Got to Dance, garnering standing ovations and raving reviews all around. Leena Patel revealed: “I’m really looking forward to judge the talents competing”.

Samir Bhamra is the creator of Phizzical, a theatre production company based in West Midlands, which create exciting and spectacular live performances to entertain audiences of all ages and backgrounds.

Charity is an aspect that resonates down to the very core of the competition, with the British Asian Trust as the official charity partner.

More significantly, all profits of this year’s Just Bollywood will go towards funding the British Asian Trust’s anti-child trafficking project in India.

The funds will be used to help survivors to recover from the abuse and trauma of being trafficked; and to empower young women to rebuild their lives, reintegrate into society, and gain new skills to support their futures. 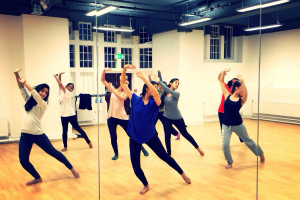 Resources will also be directed to reduce the prevalence of trafficking within the most vulnerable communities.

Founded in 2007 by a group of British Asian business leaders, at the suggestion of HRH The Prince of Wales, The Trust has already touched the lives of more than 1 million people in the poorest communities worldwide.

They do this by investing in high-impact local charities known to deliver lasting change, by transforming lives through education, health, and livelihood initiatives that generate self-sufficiency.

As well as incredible dance performances from the 6 participating universities, audiences will also witness a live performance by Punjabi By Nature (PBN), who have produced huge Bhangra tracks like ‘Phitteh Moo’ and ‘Aashiq’ featuring Miss Pooja.

Just Bollywood will take place at the revered Logan Hall in London on Saturday 13th December 2014 at 6pm. Tickets range from £15 to £20 and are available from the Just Bollywood website.

Sonika is a full-time medical student, Bollywood enthusiast and lover of life. Her passions are dancing, travelling, radio presenting, writing, fashion and socialising! “Life isn’t measured by the number of breaths taken but by moments that take our breath away.”
Sukshinder Shinda smashes it with Collaborations 3
Mirchi Music Awards Punjabi 2014 Winners