The famous yoga guru and teacher, BKS Iyengar, has died at the age of 95. Iyengar created his own brand of yoga which spread around the world, from his school in Pune, India.

“The nation has lost a personality who devoted his life to teaching India’s ancient wisdom."

Mr Iyengar was massively influential in making yoga more popular and widely practiced. He taught this ancient art around the world and wrote 17 books in his lifetime.

In fact, Mr Iyengar is now seen to have created his own unique form of yoga, which he called ‘an art and a science’. His Iyengar yoga is practiced today in over 70 countries, and his books have been translated into 13 different languages.

In his pioneering technique, up to 50 props such as ropes, belts and mats can be used in different ways to help stretch out the muscles and realign a person’s body. 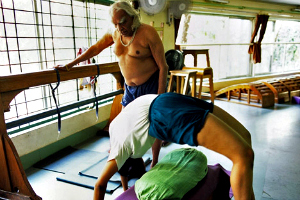 These props help even beginners to achieve difficult yoga poses, as the guru wanted everyone to be able to practice it and gain the physical and mental health benefits.

This type of yoga spread internationally in the years after Mr Iyengar first set up his yoga school in the Western city of Pune, where he eventually died.

Among many others, Mr Iyengar taught yoga to famous writer Aldous Huxley and also the violinist Yehudi Henuhin. He is reported to have passed away after contracting kidney problems.

Though he had been receiving treatment in a hospital in Pune for a week, doctors were unable to do anything more for him. Right up until his death, the guru continued to keep his body healthy through regular practice of yoga.

Despite his old age Mr Iyengar could still, incredibly, maintain the sirasana for half an hour until 2013. This is a stand in which the person balances on their head, and requires much balance and bodily strength.

In 2013, Mr Iyengar spoke about his practice and how the mind and body can both be made healthier through yoga, saying: “When I stretch, I stretch in such a way that my awareness moves, and a gate of awareness finally opens. 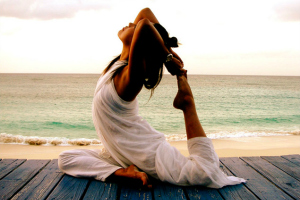 “When I still find some parts of my body that I have not found before, I tell myself, yes I am progressing scientifically.

“I don’t stretch my body as if it is an object. I do yoga from the self towards the body, not the other way around.”

India’s President, Pranab Mukherjee, spoke of Mr Iyengar’s huge importance and shared in the sadness of people in India and around the world at his death, saying:

“The nation has lost a personality who devoted his entire life to the teaching and dissemination of India’s ancient knowledge and wisdom to millions all around the world.”

Mr Iyengar is particularly notable for his ability to make yoga globally popular, as he not only taught celebrities, but wrote books and spoke on the subject to make it more accessible.

In a 2002 profile of Mr Iyengar, the New York Times said: “Perhaps no one has done more than Mr Mr Iyengar to bring yoga to the west.”

Though his death is a sad occasion, for all the millions practicing Iyengar yoga around the world, the guru will provide an inspiration and be a teacher for years to come.

Eleanor is an English undergraduate, who enjoys reading, writing and anything media related. Aside from journalism, she is also passionate about music and believes in the motto: “When you love what you do, you’ll never work another day in your life.”
Monsoon Make-Up Trends
5 Healthy Drinks for Weight Loss