At the age of 81, the multi-talented veteran Bollywood actor and dialogue writer Kader Khan sadly passed away in Toronto on December 31, 2018, following a lengthy illness.

Twitter was in overflow mode with tributes, as the industry mourned the loss of a legend.

Kader Ji was reportedly suffering from progressive supranuclear palsy, a degenerative disease that triggers a loss in breathing and difficulty in walking.

Earlier, when Amitabh came to know about his deteriorating health, he went on Twitter to post a message for his well being:

T 3041 – KADER KHAN .. actor writer of immense talent .. lies ill in Hospital .. PRAYERS and DUAS for his well being and recovery .. saw him perform on stage, welcomed him and his prolific writing for my films .. great company, a Libran .. and many not know , taught Mathematics ! pic.twitter.com/yE9SSkcPUF

Khan Saab shifted to Canada with his eldest son a while ago. But ever since he had knee surgery at the Kokilaben hospital in Mumbai three years ago, he never was the same.

From that time onwards, he was either falling down, suffering from fever or on bed rest.

Prior to his death, he was regularly in hospital. He was admitted to a hospital in Canada on December 28, 2018, after complaining of breathlessness. Critically unwell, he was put on a BiPAP ventilator.

On January 01, 2019, Kader Ji’s son Sarfaraz confirmed the news of his father passing away at 6 pm Canadian time. Sarfaraz and his family were beside him. 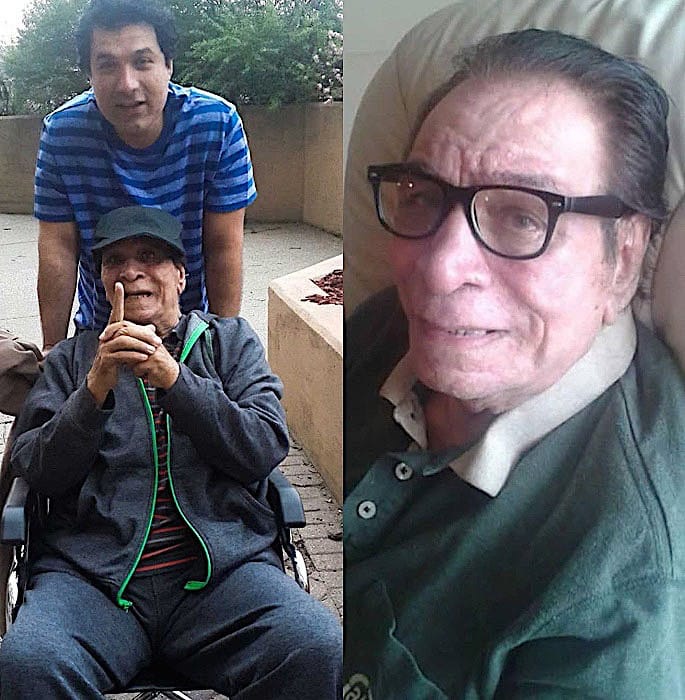 “My dad has left us. He passed away on December 31 at 6 pm as per Canadian time due to prolonged illness. He slipped into a coma in the afternoon.

“The last rites will be performed here in Canada only. We have our entire family here and we live here so we are doing it.”

He added: “We are thankful to everyone for their blessings and prayers.”

Kader Khan, an ethnic Pashtun of the Kakar tribe was born in Kabul, Afghanistan on December 11, 1937.

His father Abdul Rehman Khan was from Kandahar, Afghanistan. On the other hand, his mother Iqbal Begum came from Pishin, British India (now in Pakistan).

His three brothers Shams ur Rehman, Fazal Rehman and Habib ur Rehman sadly left this world early. Consequently, the family moved to Mumbai in hope of better luck. 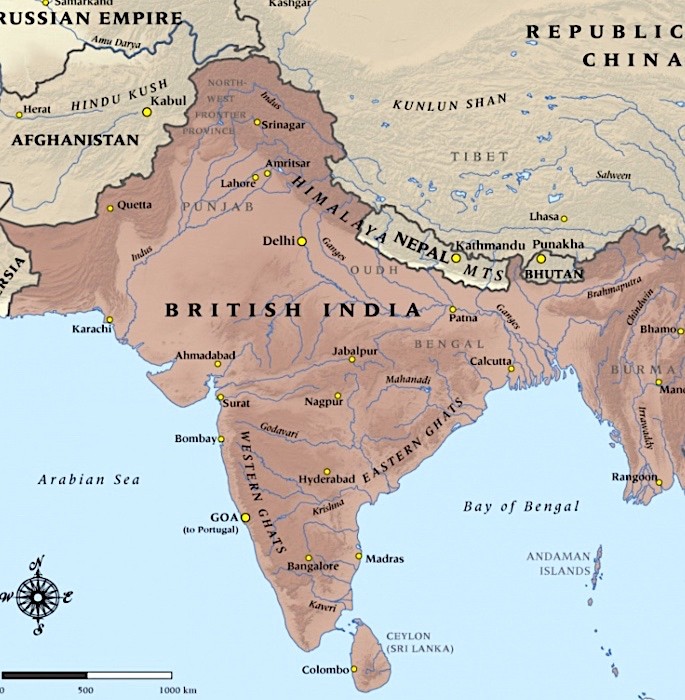 But shortly after moving to the city, his estranged parents had a divorce. Before attaining success, revealing about his struggles Khan Saab said:

“I was born in Kabul, Afghanistan, in 1952. But my mother was scared of raising me there.”

“Three of my older brothers had died before they were eight years old. My mother believed there was something wrong in the Kabul air.”

He added: “But the days weren’t easy even after we came to Bombay. We used to stay in a filthy slum in the red-light area as that was the only place we could afford.

“Although poverty-stricken, my mother insisted that I do not give up studies. She even took me to task once when she discovered that I was planning to work in a tin factory to earn a few rupees.” 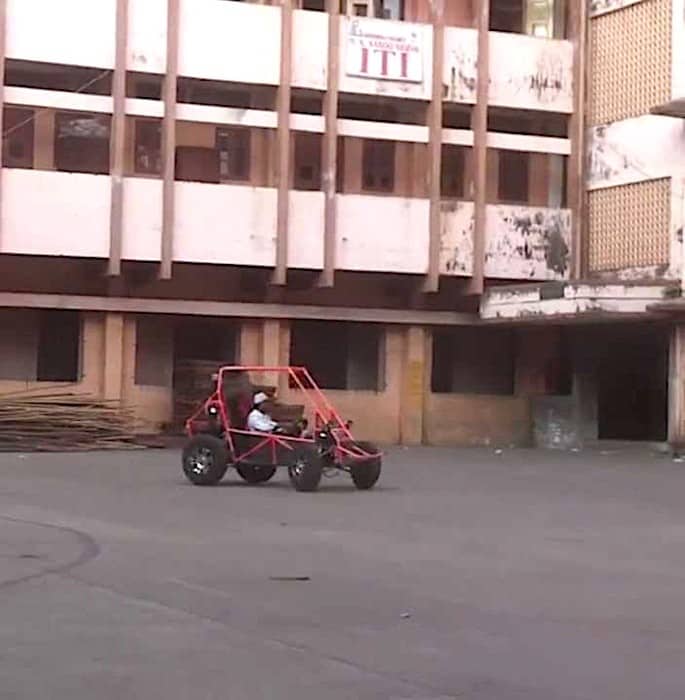 His humble and difficult early days made him understand the value of education.

Hence, after acquiring an engineering diploma, he briefly became a professor of civil engineering at the M.H. Saboo Siddik College of Engineering in Mumbai.

Kader Ji then made his acting debut in Yash Chopra’s Daag, alongside superstar actor Rajesh Khanna and the elegant Sharmila Tagore. In the film, he plays the prosecuting attorney.

Khan Saab went to on to work in over 300 films. 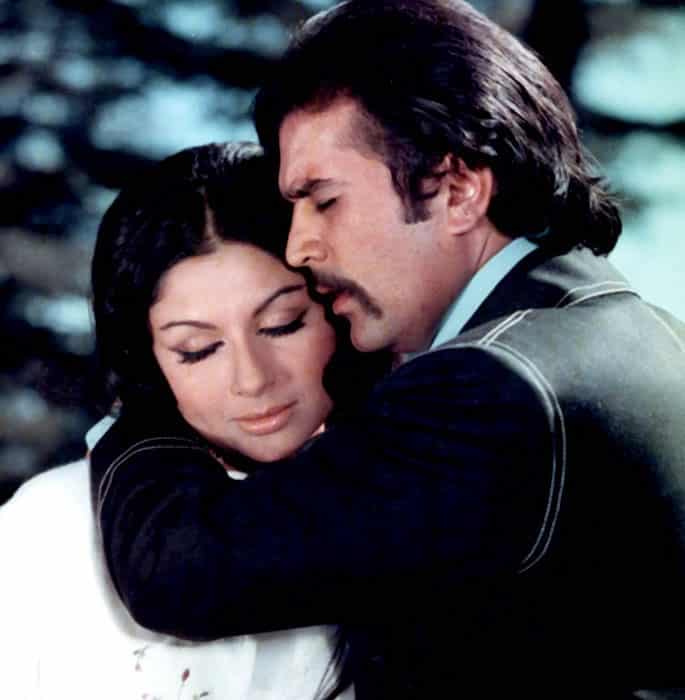 As an accomplished artist, he formed a good partnership with actor Govinda and director David Dhawan in comedy films from the 1990s. 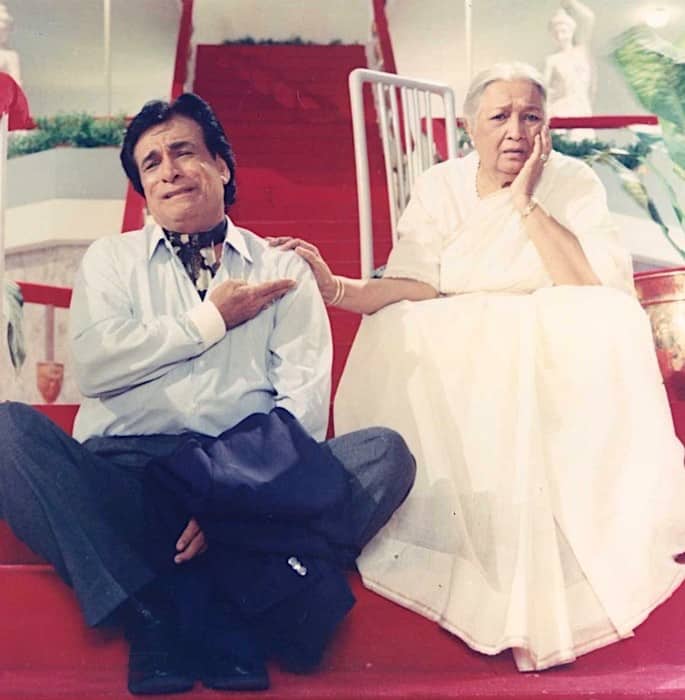 As a result of the collaboration, his fans got to watch super hit films. These include Aankhen (Hasmukh Rai 1993), Coolie No.1 (Choudhry Hoshiyarchand), Hero No. 1 (Dhanraj Malhotra: 1997) and Haseena Maan Jaayegi (Seth Amirchand: 1999).

At these times movies were incomplete without Kader Ji.

As a writer, Khan Saab penned the dialogues of many successful films featuring Amitabh Bachchan. 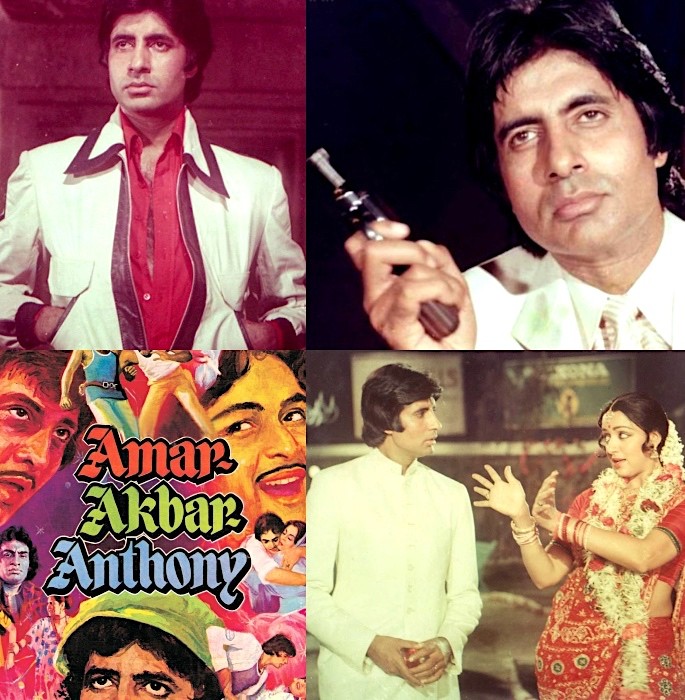 Manmohan Desai and Prakash Mehra were the directors for these films. Big B delivers one of his iconic dialogue in Amar Akbar Anthony saying:

Tributes kept flowing in from friends of Kader Ji from the film fraternity, along with expressing their heartfelt condolences.

Amitabh Bachchan who worked with him in a number of films was amongst the first Bollywood stars to pay homage on Twitter:

T 3045 – Kadar Khan passes away .. sad depressing news .. my prayers and condolences .. a brilliant stage artist a most compassionate and accomplished talent on film .. a writer of eminence ; in most of my very successful films .. a delightful company .. and a mathematician !! pic.twitter.com/l7pdv0Wdu1

Karan Johar, Arjun Kapoor, Varun Dhawan and others also went on Twitter to mourn the death of the Bollywood legend.

Actor Govinda who fondly remembers Khan Saab as a father figure went on Instagram posting a picture with a caption reading:

“He was not just my “ustaad” but a father figure to me, his midas touch and his aura made every actor he worked with a superstar.

“The entire film industry and my family deeply mourns this loss and we cannot express the sorrow in words. I pray to God that may his soul rest in peace.”

As everyone mourns his death, fellow villains also shared their thoughts. Speaking about the loss, famous villain Ranjeet and Suhaag co-star says:

“I have shared a lot of films with him. It is a sad moment.”

“Everyone who has come into this world has to go. But I feel bad, I feel sorry that he suffered a lot of pain.

“As far as his work is concerned, he will always be remembered because he’s written very beautiful films and he was a very good actor also.” 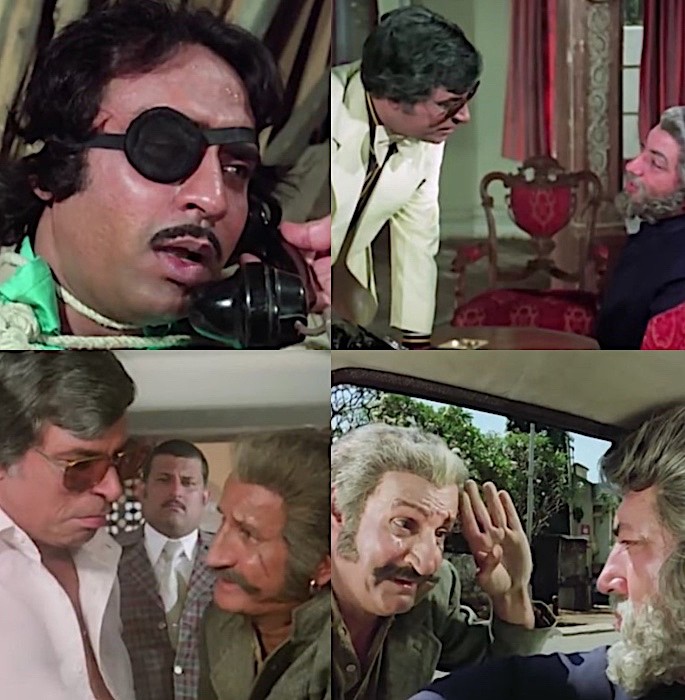 Other reactions came from the likes of Shakti Kapoor who along with the Kader Ji defined the 90s. Talking about his relationship with Khan Saab, Kapoor told Hindustan Times:

“It’s a very sad moment. I am in Goa and I have been mourning since I heard the news of Kader Khan’s death. It’s not a very good first day of the year.

“I learnt a lot from him and I will miss him a lot.”

“He once told me that his acting career began as a theatre artist. He was a professor in a college and would come up with dialogues while riding the scooter.

“His assistant, who would be riding pillion, would write them down.” 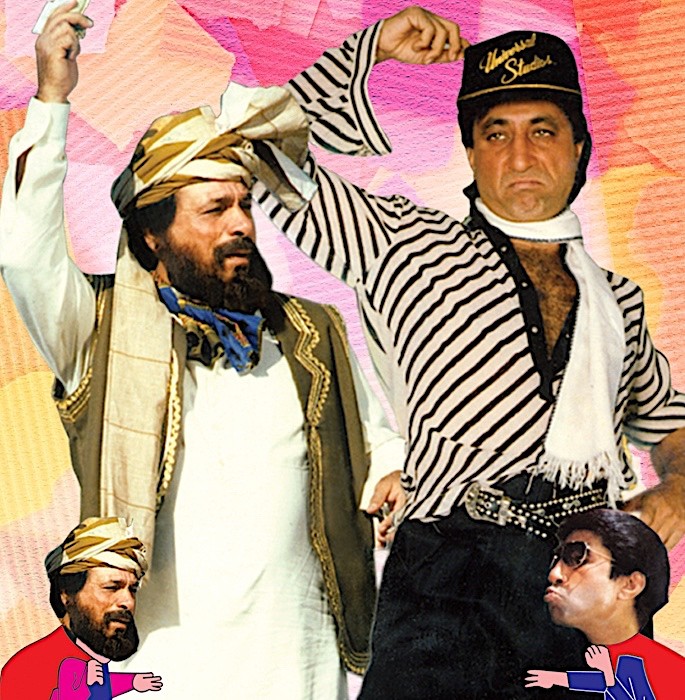 Kapoor also had a dig at the industry for not caring about him when he was alive:

“When Kader Khan was not working for the last decade and was suffering, nobody was very concerned about him.

“Why was he left so lonely? And why are actors left so alone when they are sick or not doing too well?

“Kader Khan was financially very secure but very lonely because when he was sick, not many people visited him or spent time with him. He was left alone with his family.”

Surprisingly he only received ‘Best Dialogue’ once for the film Meri Awaaz Suno (1981) at the 1982 Filmfare Awards. 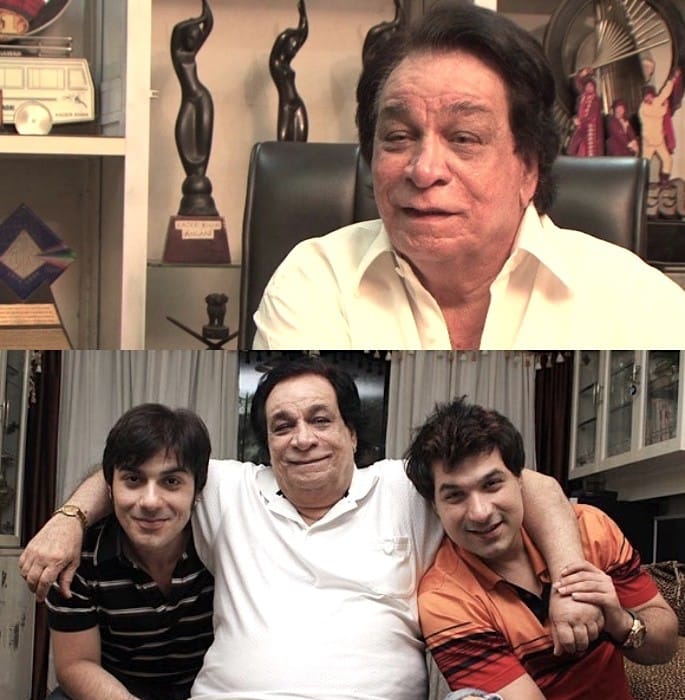 Whilst he is no more, his dialogues and acting will forever remain in our memories.

As a tribute to the legend Kader Khan (1937-2018), the beautiful poetry of Sir Muhammad Iqbal and Ashok Sahil comes to mind: