A cryptocurrency investor of Indian origin has reportedly purchased a piece of artwork for more than $69 million.

"the most valuable piece of art for this generation."

An Indian origin cryptocurrency investor has bought a piece of artwork by digital artist Beeple for $69.3 million.

The investor is based in Singapore and goes by the name Metakovan.

It has been reported that Metakovan is a pseudonym of the investor, which means King of Meta in Tamil.

The man’s real identity is not known, but the investor is the co-founder of the non-fungible token (NFT) collection called Metapurse.

Metapurse describes itself as a “crypto-exclusive fund that specialises in identifying early-stage projects across blockchain infrastructure, finance, art, unique collectables and virtual estate”.

It is also a production studio for NFTs and a major funder of the digital art form, reportedly owning the largest known collection of NFTs in the world.

It is a cache that is now even bigger, or at least, more expensive.

In a statement, Metakovan said:

“When you think of high-valued NFTs, this one is going to be pretty hard to beat.

“And here’s why – it represents 13 years of everyday work.

“Techniques are replicable and skill is surpassable, but the only thing you can’t hack digitally is time.

“This is the crown jewel, the most valuable piece of art for this generation. It is worth $1 billion.”

According to the auction house Christie’s, the anonymous investor purchased the piece, titled Everydays: The First 5,000 Days. 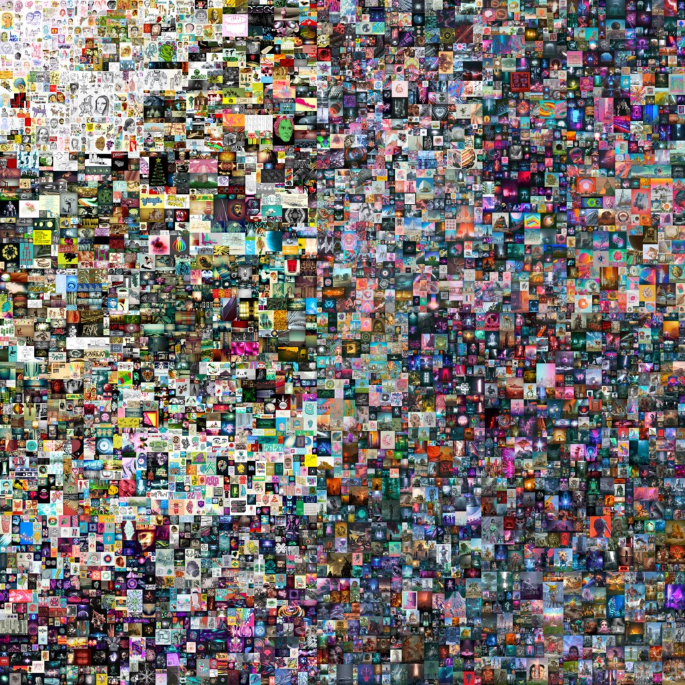 The price reportedly increased from the $20 million range to over $50 million during the last few minutes of the auction.

The artwork is a mosaic of 5,000 artworks made over the last 13 years by Mike Winkelmann, who is better known by the name Beeple.

His first image came in May 2007 when he drew an image of his Uncle Joe, called it Uber Jay and shared it online.

The next day, he made another image and posted it online.

He did the same thing every day for 13 years.

Winkelmann’s images became weirder as time went on, and he learnt how to use 3D technology.

Many of his pieces respond to the news agenda or reference pop culture. They are typically set in post-apocalyptic futuristic landscapes.

Some took minutes to create while others took a few hours.

When his design business slowed down due to the pandemic, Winkelmann created a collage of the 5,000 images.

While it is a solely digital piece of art, it is the largest known sale of an NFT.

Reportedly, the most expensive painting ever sold was Salvator Mundi by Leonardo da Vinci for $450.3 million in 2017.

Twobadour, the steward of Metapurse whose real identity is also anonymous, said he understands that valuation might sound like a “fantastical number, but we do believe that down the line this has the potential to become the most valuable piece of art ever”.

Dhiren is a journalism graduate with a passion for gaming, watching films and sports. He also enjoys cooking from time to time. His motto is to “Live life one day at a time.”
The Rise of South Asian Audiobooks
10 Best Books with Incredible South Asian Stories