A campaign in Kerala is letting men experience period pain in a bid to normalise the conversation around the subject.

"men find it hard to make it past four"

Indian men in Kerala are experiencing period pain as part of a campaign to break the stigma around periods.

Men have been trying out menstruation simulators as part of an initiative by Cup of Life.

A video showed men wincing in pain as women watched on, laughing.

“That was really painful. I never want to experience that ever again.”

It was launched by local lawmaker Hibi Eden from the Congress Party along with the Indian Medical Association (IMA), which represents doctors.

In India, menstruation is largely taboo and hardly discussed.

While this attitude has changed a little, most women are still uncomfortable discussing their period or the intense cramps that often accompany it with their employers or male family members.

But Cup of Life hopes they can spark a change in Kerala.

Lawyer Sandra Sunny, who designed the #feelthepain event, said the simulator is the “easiest way” to encourage meaningful conversations and change such attitudes.

She says: “If you ask college boys directly what they know about period cramps, they’d be reluctant to talk.

“But if you ask them questions like – ‘have they talked about periods with anyone, what makes them reluctant to talk about it’ – after using the simulator, they are more forthcoming.”

The simulator has two wires that can be attached to two people at the same time and a dial that can turn up the pain level from one to 10. 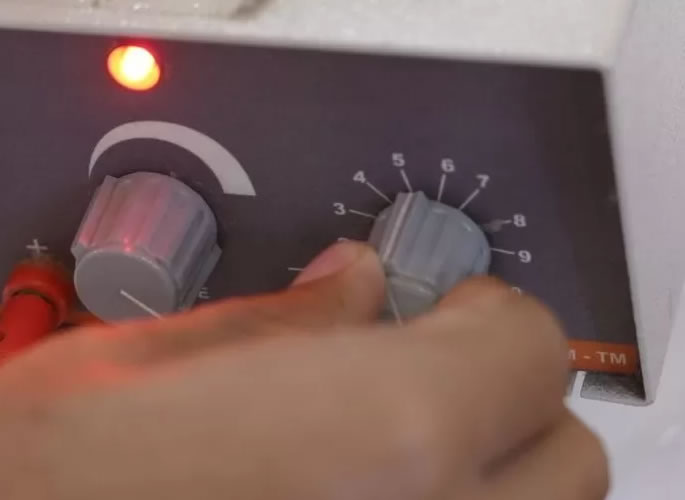 Mr Nair recalls the girls who tried it “felt nothing” while “the guys, including me, were hollering and bringing the place down”.

A few male students who tried the simulator said they could barely stand the pain.

“They reacted immediately, saying, ‘switch it off!’.”

Dr Akhil Manuel, coordinator of the Cup of Life campaign, says this is a common reaction.

He said: “Women don’t even flinch at [level] nine while the men find it hard to make it past four, even though the simulator only transmits 10% of the actual pain.”

Ms Sunny says the simulator helps men understand how debilitating it is to experience period pain for years.

Mr Eden says the idea came after he started an initiative to donate thousands of free menstrual cups to women in the village of Kumbalangi.

But Mr Eden says that the bigger picture is to create a healthy, progressive attitude towards menstruation.

Dr Manuel says many lawmakers and organisations across India have expressed interest in the campaign and asked for ways to replicate it in their communities.

He adds: “You need to work with the community, understand how it works and then find pathways within their structure that will help you have this conversation.”

Dhiren is a journalism graduate with a passion for gaming, watching films and sports. He also enjoys cooking from time to time. His motto is to “Live life one day at a time.”
Controversial Skincare Ingredients You Should Know About
How Mental Health impacts Desi Marriage, Love & Sex