Four Indian gardeners suffered severe injuries after being struck by lightning while taking shelter from a storm.

Four Indian gardeners have been hospitalised after being struck by lightning during a storm.

The gardeners huddled under a tree for shelter before the lightning struck on Friday, March 19, 2021.

All four were taken to a hospital in Manesar for treatment.

However, the incident proved fatal as one of the gardeners, 38-year-old Ramprasad of Uttar Pradesh, died of his injuries.

The other three gardeners are in a stable condition.

CCTV cameras captured the horrific incident. The footage showed a bright flash as the lightning bolt struck the tree above the four men.

Three of the gardeners instantly fell to the ground following the blast. The fourth collapsed moments later.

The three survivors of the blast have been identified as Shivdutt and Lali, along with their supervisor Anil.

When the storm broke out, the gardeners took shelter from the rain and thunder on the side of a road.

However, the situation took a turn for the worst as the gardeners were suddenly struck.

“The victims stood under a tree in the society when suddenly the lightning struck the tree and all four men collapsed immediately, being critically injured.

“They were rushed to a private hospital in Manesar when Ramprasad passed away during his treatment on Friday night.” 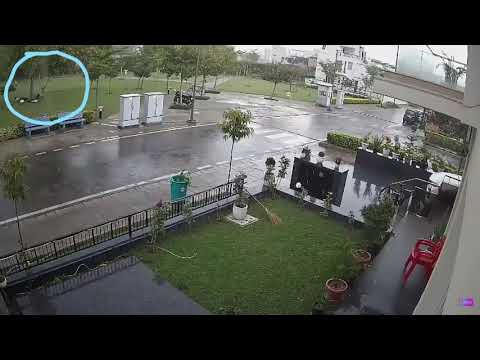 Lightning strikes are common in northern areas of India during heavy monsoon rains and thunderstorms.

In June 2020, more than 100 people from north India died due to dozens of lightning strikes across two states.

Another 20 were hospitalised with injuries.

According to Bihar’s Disaster Management Minister Lakshmeshwar Rai, it was one of the highest death tolls from lightning the state had recorded in recent years.

The National Crime Records Bureau (NCRB) found that more than 2,000 people in India were killed by lightning in 2018.

As well as this, they also found that at least 2,000 people have died from lightning strikes every year since 2005.

One of the reasons for the high number of deaths is the large percentage of Indians who work outdoors.

More Indians work outside compared to other parts of the world, which makes them more vulnerable.

Louise is an English and Writing graduate with a passion for travel, skiing and playing the piano. She also has a personal blog which she updates regularly. Her motto is "Be the change you wish to see in the world."
Pakistan PM Imran Khan tests Covid-19 positive after Vaccine
10 Tips for Indian Students before they Study in London