An Indian couple has hit headlines for their unique wedding contract, with the top condition stating “Only one pizza a month”.

"He would ask how much pizza will you eat?"

An Indian couple signed a wedding contract but it has gone viral for its unusual conditions.

The fun list of do’s and don’ts was jokingly put together by the newlywed’s friends.

In a video by the wedding photography company, a lot of attention is centred on the top condition, which stated: “Only one pizza a month.”

This was aimed at the bride, who is described as a “pizza freak” by her friends. 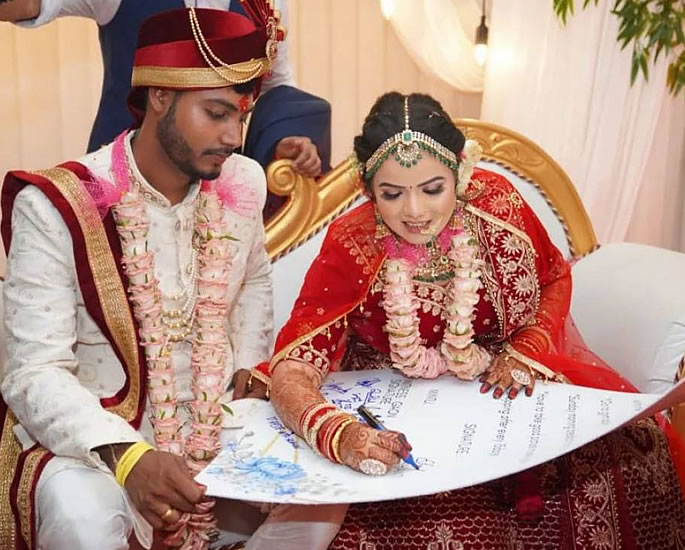 The newlyweds met in 2017 when they joined the same commerce class.

They started talking and in February 2018, they went on their first date to a pizza place.

Mintu explained: “We bunked the last class of our day and went to a nearby pizza outlet.

“I knew I had to take her for pizza because she always talked about pizzas.”

Shanti added: “I am very fond of pizzas. On dates, I would always say let’s go and eat a pizza.”

But after a while, Mintu started to complain about the frequency they ate pizza.

Shanti said: “He would ask how much pizza will you eat? Let’s get something else.”

The couple has never argued about food but Shanti said “he would always complain to friends, he would say that how irritated he was that every time he had to eat a pizza and this had become a matter of jokes among all our friends”.

“I think she thinks about pizza in her free time and even in sleep.”

Speaking about the contract, Raghav said:

“Since we met in college in 2017, we’ve spent so much time together and become very close.

“We have seen their romance bloom and we wanted to do something unique, something memorable for them when they got married.

“So, we brainstormed in our group and came up with eight points that we thought would work for them. Since she’s a pizza freak, we put it right at the top.”

In addition to ‘One pizza a month’, the contract states:

It started off as a joke but quickly went viral.

The couple were overwhelmed with the response, with Shanti saying:

“We were busy with our wedding celebrations so we realised only three-four days later that the video had gone viral.”

Mintu added: “We never thought that it would travel so far. It was a surprise, a really lovely one. But I feel happy when people ask me about the video.”

The couple plans to frame the contract.

However, Raghav said it is unlikely that Shanti will abide by the ‘one pizza a month’ condition.

He said: “She takes it as a joke. She keeps complaining that she’s put on 3-4kg in the past few years, but I don’t think that she’s really serious about cutting down on her pizza consumption.”

Shanti agreed, adding: “He’s right, we’ve already had pizzas twice since the wedding and it’s only been two weeks.”

Dhiren is a journalism graduate with a passion for gaming, watching films and sports. He also enjoys cooking from time to time. His motto is to “Live life one day at a time.”
Indian Cousins killed by Relatives over Love Affair
Woman Slaps Boyfriend in Delhi Metro over Zara T-Shirt