A police investigation has revealed that an Indian husband from Rajasthan ordered the contract killing of his wife and son.

An Indian husband has been arrested for soliciting the murder of his wife and son. Police found out that he hired someone to carry out the double killing.

Shweta Tiwari, aged 30, and her 21-month-old son Shriyam were found dead at a residential apartment in Jaipur, Rajasthan.

On January 10, 2020, Rohit Tiwari and the contract killer were arrested after CCTV footage showed the killer walking out of the apartment with the toddler.

It was revealed that he had his wife and son killed because he wanted to remarry and start a new life.

Rohit was suspected to have been involved after Shriyam’s body was found, however, they found that he was on duty at Jaipur Airport at the time of his wife’s murder.

An investigation later revealed that he paid someone to carry out the murders.

Tiwari was arrested and he later confessed. He told police that he paid Uttar Pradesh resident Sourabh Choudhary to kill his wife and son. 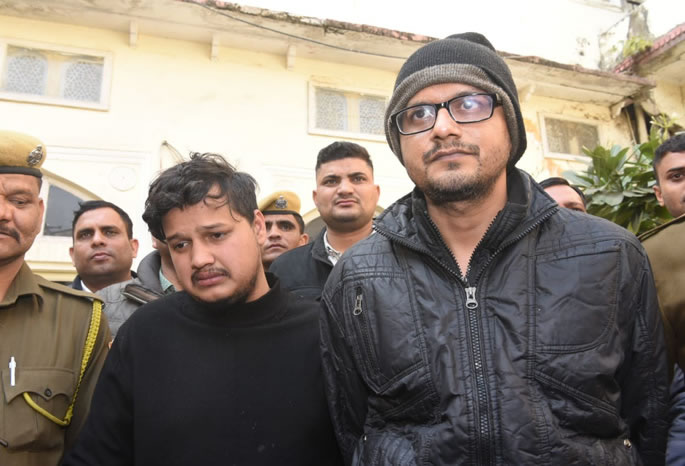 According to Police Commissioner Anand Shrivastav, Tiwari had strained relations with his wife and he wanted to marry someone else.

But when their son was born, Rohit was not happy as he believed the child would prevent him from being able to marry again.

He hired Sourabh, his friend’s brother-in-law, and planned out the murder.

On January 7, 2020, Sourabh entered Shweta’s apartment and struck her with an unknown item. He then slit her throat.

Sourabh also strangled Shriyam and bludgeoned him to death.

He was spotted on CCTV carrying the child’s body out of the apartment and dumped his body behind the apartment block in Pratap Nagar.

Police are investigating the possible role that Choudhary’s relative had.

Commissioner Shrivastav explained: “The conspiracy was hatched on January 3 at a hotel near the Jaipur airport. Rohit paid Rs 20,000 (£210) in advance to the killer.

“Rohit had planned the murder of his wife and son to start a new family as his relationship with his wife was strained right from their marriage.”

He went on to say that Tiwari claimed that the incident was a case of kidnapping and extortion.

While working in Udaipur, Rohit became friends with Hari Singh. Mr Singh later introduced him to Sourabh when the Indian husband moved to Jaipur.

Commissioner Shrivastav said: “The role of Hari Singh will be interrogated and he will be arrested if found involved in the case.”

On the same day of the double murder, Shweta’s body was discovered lying in a pool of blood. Shriyam was found a day later.

Rohit had filed a police case in order to draw attention away from him.

Sourabh took Shweta’s mobile phone and later used it to call Rohit to demand a ransom of Rs. 30 Lakh (£32,000) to make it seem like an extortion case.

Shweta’s parents told police that the Indian husband has been abusive to their daughter ever since they got married in 2011.

“Rohit called us a couple of days ago and threatened that he would kill our daughter.”

I never thought even in my wildest dreams that he would actually act on it. Shweta had a son almost seven years after the marriage. She lived for the boy.”

After questioning locals and reviewing the CCTV footage, Tiwari was arrested and he later confessed. Sourabh was also arrested.

India Today reported that while both suspects remain in custody, further investigations are on.

Dhiren is a journalism graduate with a passion for gaming, watching films and sports. He also enjoys cooking from time to time. His motto is to “Live life one day at a time.”
Two Businessmen jailed for £1m Property Fraud
Glam Sex Racket with 3 TV Actresses Busted in Mumbai