A lover suddenly disrupted the wedding ceremony of his past girlfriend in Gorakhpur who was going through an arranged marriage.

the lover quickly jumped on the wedding stage

In a very strange and shocking incident taking place in Gorakhpur, Uttar Pradesh, an Indian bride’s lover jumped on the stage during her arranged marriage ceremony and to disrupt it.

During the exchanging of garlands ceremony known as the Jayamala between groom and bride, the lover quickly jumped on the wedding stage and applied sindoor (vermillion) forcibly to the bride’s forehead, pulling back her dupatta.

Wearing a scarf covering his face ad head, it is difficult to see his face as he commits this crazed act.

At this point, the groom stands watching what is taking place in complete dismay, looking at the other guests to try and make sense of it all.

The lover then grabs the bride from an arm and holds her upright. Putting a hand in his pocket he then gets out more sindoor to put over her head.

As this takes place, family members interject and grab the man and throw him onto the ground. Where he is then beaten up by them.

This sudden act by the lover in the middle of the wedding ceremony took everyone by surprise and left the groom and the families stunned by what they saw.

A video of this shocking incident emerged on December 4, 2021, and went viral.

It was revealed the lover and the bride, who both come from a village in the Harpur Budhat area, were in a relationship and loved each other.

However, after the lover had left the village to get a job and earn a living for a few months, the family of the bride arranged her marriage with the groom present at the wedding.

When the lover found out that his girlfriend back home was getting married, he returned to the village two days prior to the wedding taking place on December 1, 2021.

Some say the lover did what he did to defame the bride in front of everyone as an act of revenge, others say the bride may have known what he was going to do. 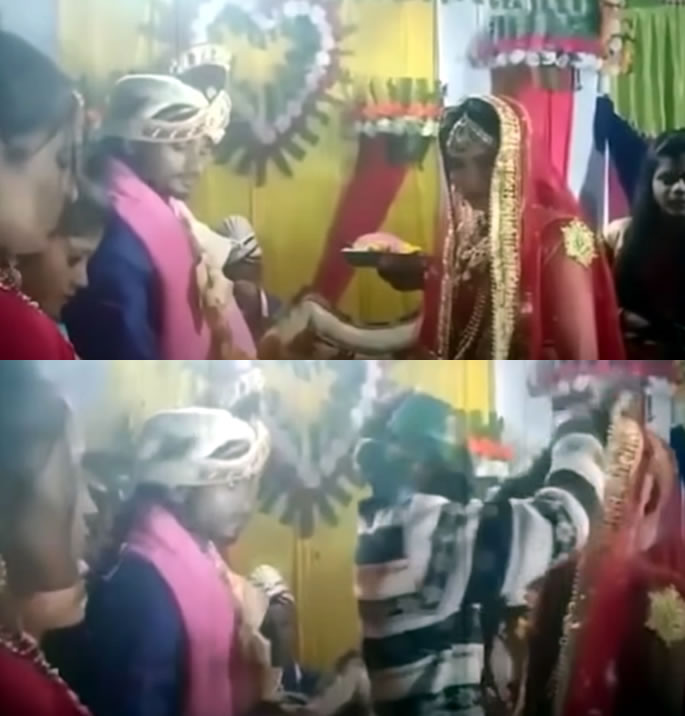 Immediately after the incident, the groom refused to continue with the marriage causing a huge uproar at the wedding. The situation between both families got heated due to what had taken place.

The lover continued to stay even after getting beaten up by the bride’s family adamant that he wanted to be with her.

The bride’s family contacted the local police who arrived at the wedding promptly.

This resulted in the police, village elders and panchayat getting involved to address the situation between both families, and the bride and groom.

With the presence of the police, the lover calmed down. He was told to leave and go home.

After an evening of discussion between everyone involved which went on into the late night, it was agreed the following morning, that the marriage would be completed.

The ceremony took place and the groom accepted the bride as his wife and she subsequently left for her in-laws with him.

Amit enjoys creative challenges and uses writing as a tool for revelation. He has major interest in news, current affairs, trends and cinema. He likes the quote: "Nothing in fine print is ever good news."
Indian Love Marriage results in Husband badly Beaten Up
Builder jailed after Worker Crushed at Building Site