A girl from the Rohtas district of Bihar in India eloped from her family in the Red Light district, to marry her lover.

"My family are threatening my in-laws"

A girl named Priyanshu eloped with her lover named Vicky Kumar from a Red Light district located in Kadjan of Sivasagar in the Rohtas district of Bihar, India.

Priyanshu belongs to a family that operates a prostitution business in that Red Light area. She ran away from her family with Vicky to have a love marriage.

She arrived in Delhi with her lover and they both subsequently got married.

The girl claims that her family wanted her to join the business of prostitution and has now released a video message saying that her in-laws family is in danger from her parents and relatives.

She has appealed to the police for protection from her maternal family. She fears that her family will not let her and her husband settle and will come after his family.

The newly married bride lodged her complaint at Sivasagar police station, where she also provided official proof of marriage to officers.

Priyanshu claims that the police are not helping her and is appealing for support from the public.

In the video Priyanshu says:

“My family are threatening my in-laws and they have also been violent towards them.”

“The police are not giving any help so I am requesting you to please help us.” 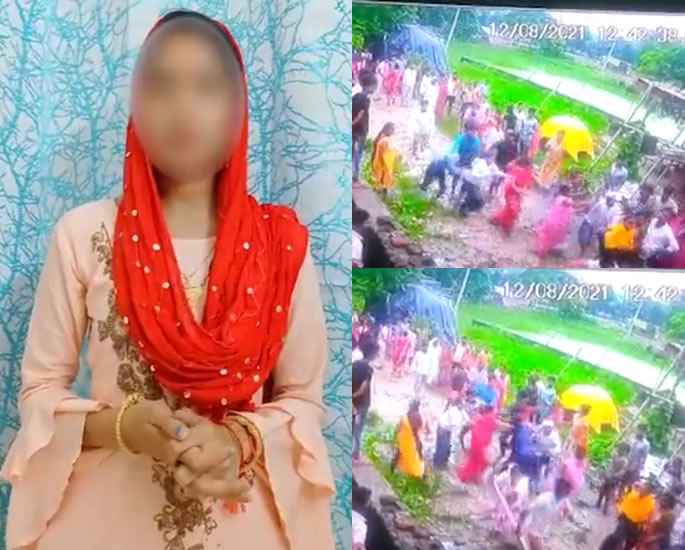 Her family has beaten up her in-laws already. So, now she fears for the life of her husband and the whole family because she has got married.

“My family are involved in prostitution and they wanted me to get involved in the same trade. Due to this, I had to elope with Vicky Kumar whom I have loved from a young age.

“And without any kind of force, we have got married.”

After running away, two days later after the wedding, she sent a video and photos of her marriage to her family highlighting that she was now a married woman and that she did it of her own free will.

This infuriated her family and relatives and they arrived at Vicky’s parent’s residence on August 12, 2021, and began to beat them up with sticks and violence, of which a video was also made and went viral.

There have been clashes between Priyanshu’s family and Vicky’s family where her family claim that their daughter has been lured away on false pretences and the marriage was done by force and not her will.

So, now she feels they will come after her in-laws again after these incidents of violence.

Nazhat is an ambitious 'Desi' woman with interests in news and lifestyle. As a writer with a determined journalistic flair, she firmly believes in the motto "an investment in knowledge pays the best interest," by Benjamin Franklin.
Man jailed for sharing Racist Video of Priti Patel
Indian Man jailed for Life for Kidnapping & Raping Stepdaughter