Imran Ali the man who raped and killed the little girl Zainab Ansari and other similar victims was hanged till death at a Lahore Jail in Pakistan for his crimes.

he was fearless and showed no remorse or shame

Imran Ali, the rapist and killer of six-year-old girl Zainab Ansari, was executed at 5:30 am, 17 October 2018, and hanged till death at Central Jail Kot Lakhpat, Lahore, Pakistan.

They arrived at the high-security jail early morning prior to the execution with a view to talking to the convict, which did not happen.

Ameen Ansari and the relatives were then present inside the death cell where and when Imran Ali was executed, in the presence of Magistrate Adil Sarwar and the medical team.

Zainab’s father said ‘justice is served’ and was pleased to see his daughter’s killer hanged till death in front of his eyes.

Mr Ansari speaking of the killer’s attitude to his conviction and death penalty said he was fearless and showed no remorse or shame. He walked onto the death spot by himself without talking to anyone.

Adding that Ali did not ask for forgiveness or offered an apology directly to him.

Although, as his last request and wish before being hanged, he did say he wanted to apologise to Zainab’s father Haji Muhammad Ameen Ansari.

Imran Ali’s family members also attended the execution outside of the jail and refused to talk to media.

Mr Ansaris said that the parents and family of Ali did not contact them for any kind of apology or remorse for the unlawful rape and killing of his daughter and others that he murdered. 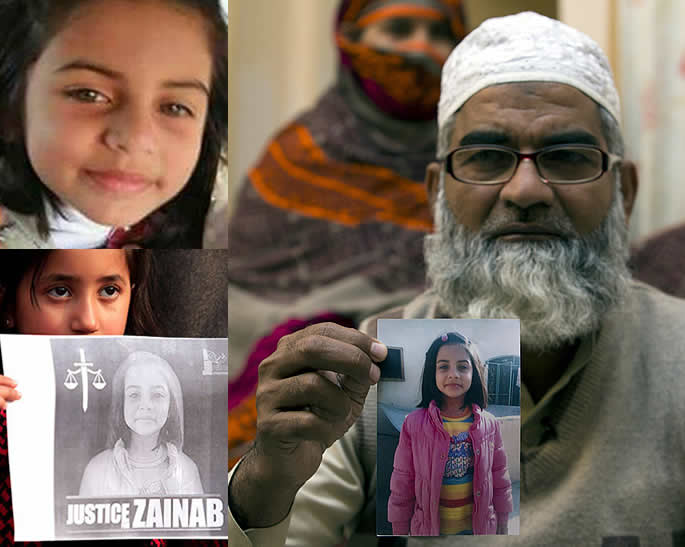 Mr Ansari told media that he wanted a public hanging of the convict as a deterrent against any such crimes in the future in Pakistan, which was not granted. He said:

“This was a golden chance for Prime Minister Imran Khan to fulfil his pledge to turn Pakistan into the state of Madinah by implementing the Islamic laws”.

Imran Ali, from Kasur, was caught with a DNA match after CCTV footage showed him walking with Zanaib, whose body he later concealed in rubbish after raping and killing her.

Over eleven other incidents with young victims took place within a 10 km radius of Kasur, linking Ali to the killings.

Mr Ansari thanks CJP Saqib Nisar for his ongoing support on the case to get justice for his daughter.

Ali’s body was handed over to his brother and family members after it went through medical examination and other necessary formalities of jail.

A very large media and public presence appeared outside the jail to cover the story of the case which has become of the fastest to be concluded in Pakistan’s judicial history.

Nazhat is an ambitious 'Desi' woman with interests in news and lifestyle. As a writer with a determined journalistic flair, she firmly believes in the motto "an investment in knowledge pays the best interest," by Benjamin Franklin.
Kiran Mazumdar-Shaw: India’s First Self-Made Woman Billionaire
20 Asian Men convicted for Sexual Abuse of Young Girls in Huddersfield