Shabnam Ali: First Woman to be Hanged to Death since 1947

Shabnam Ali may be the first woman in India to be executed since the country’s Independence from the British in 1947.

"There was blood all around, and the bodies were cut up."

Uttar Pradesh’s state has begun preparations to hang Shabnam Ali in the first execution of a woman since India’s independence in 1947.

Shabnam Ali, aged 38, was sentenced to death for murdering seven members of her own family in April 2008.

The woman was in a relationship with Saleem and wanted to get married, but Shabnam’s family was against it.

As a result, the couple drugged Ali’s father, mother, two brothers and their wives before hacking them to death with an axe in Amroha.

Ali, who was pregnant with Saleem’s child at the time, even strangled her 10-month-old nephew.

In 2010, a lower court in Amroha issued the death penalty to the couple, and the state’s high court in Allahabad later upheld the sentence.

The couple appealed to India’s Supreme Court in 2015 but failed.

The Mathura district’s prison is the only facility in the country tasked with handling female convicts’ execution.

According to the authorities in Mathura, they are preparing to execute Shabnam Ali.

The hanging date is not yet confirmed as the Amroha court had not issued her death warrant.

“We have placed an order for the rope and are just waiting for a fresh death warrant to execute her by hanging.”

Even Pawan Jallad, a well-known hangman who hanged the Nirbhaya gang-rape convicts, inspected the 150-year-old facility. 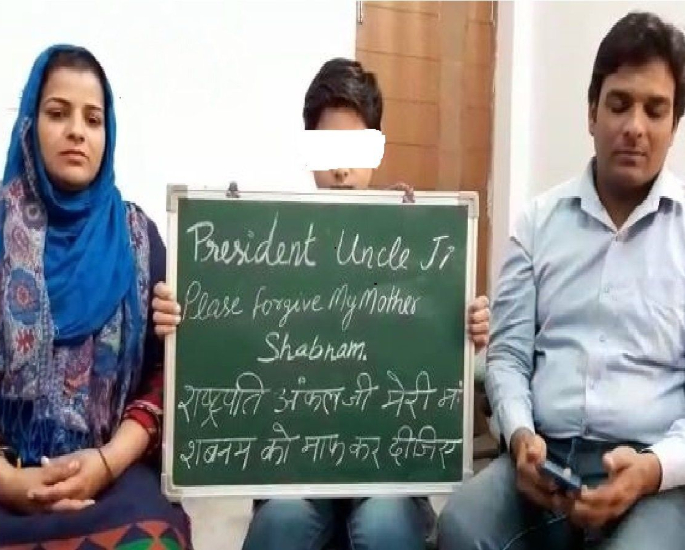 “I love my mother. I have only one demand for President uncle, that he doesn’t let my mother be hanged.

“Whenever I go, she hugs me and then asks me ‘how are you son? What are you doing? When is your school opening?

“How are your studies progressing? You don’t trouble your father and mother, right?’ These are the questions that she asks.”

The 12-year-old child was born in Muradabad jail on December 13, 2008, and is now living with his foster parents.

The child’s foster parents take him to jail every three or four months, and the boy’s foster father, Usman Saifi, was once a junior of Shabnam in the college.

According to a report by Dainik Jagran, when Shabnam last met her son, she wept for forty minutes and told him to study hard and make his new parents proud.

Ali even told him never to miss her and never insist on meeting her as she was not a good woman.

The 12-year-old is now studying in class 6 in a prestigious public school in Bulandshahr.

Supreme Court lawyer Sarthak Chaturvedi in an interview with The Times of India, said:

“Shabnam could still seek another judicial review of the petition in the Supreme Court. She could also file a curative petition.”

However, even Shabnam Ali’s close family members are looking forward to her execution.

Ali’s uncle reported that he would never accept his niece’s body after her execution.

He even recalled the crime by saying:

“We were not at home when the carnage took place.

“When we went there at around 2 am, there was blood all around, and the bodies were cut up.

“The crime was unpardonable.”