Midlands based comedian Guz Khan is one of the fresh young talents on the comedy scene. In an exclusive Gupshup with DESIblitz, Guz talks stand up and his new radio show.

Guz Khan, aka Guzzy Bear, has turned his funny man talents to radio presenting, with his very own show on the BBC Asian Network.

The former teacher, originally from Coventry, has enjoyed a rollercoaster ride of a year after a vlog calling for a pseudo-boycott of the 2015 summer blockbuster, Jurassic World, went viral.

In an exclusive Gupshup, DESIblitz finds out more about the British Asian comedian and entertainer.

Anyone who meets Guz will pick up on his natural and effortless humour. His intellect and awareness of people and current affairs allow him to comment on experiences in a very witty yet accessible way.

Guz admits that he was always interested in comedy as a child sending funny video skits to his friends, and wished to pursue stand-up comedy.

But the opportunities of open mic nights and comedy clubs were a challenge to pursue with a family, so he stuck to his day job as a teacher.

Eventually, he used Facebook as his platform and began to steadily grow a loyal fan base:

“It was a bit of a random one. I always wanted to do stand up comedy. I just popped a few videos on Facebook and people seemed to like them.” 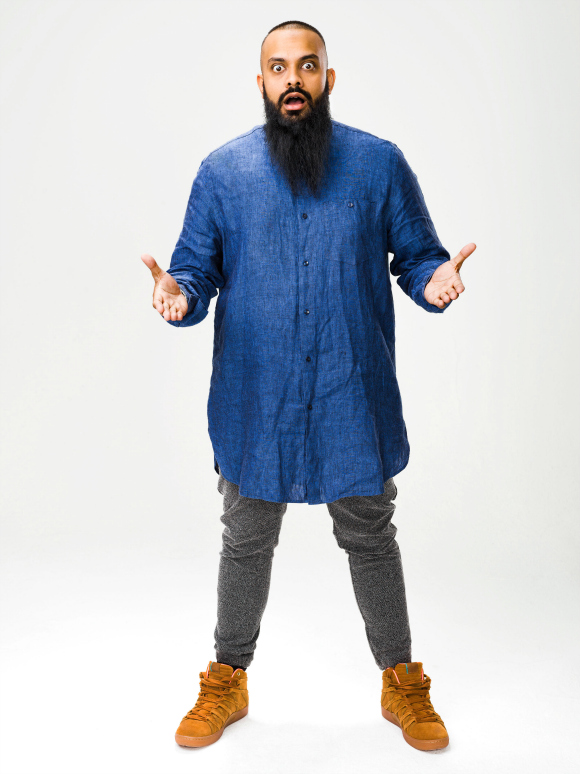 So, where did the nickname ‘Guzzy Bear’ come from?

“I got a big hairy chin, ain’t I! So we were thinking, what’s the most innovative name I could think of?

“I couldn’t call myself ‘Muslim Dave’, cos then everyone would be like, ‘Blaaaa-deee ‘ell! We’re having none of that!’ So Guzzy Bear is quite inoffensive, more light-hearted.”

He fashioned the character of ‘Mobeen from Small Heath, Birmingham’, a typical cuzzy bro who had a hilariously honest perspective of the world:

“We tried to give a lot of political satire. We just looked at characters and voices, and people that others have assumptions about.

“A lot of people from Small Heath are doctors, lawyers. Their hearts are in the right place. I wanted to give people a platform where we can kind of try and bring people together and [through comedy] we’ve managed that.”

Guz looks up to a lot of comedians from ethnic backgrounds like Eddie Murphy and Russell Peters, who have had to break down barriers to pursue comedy. 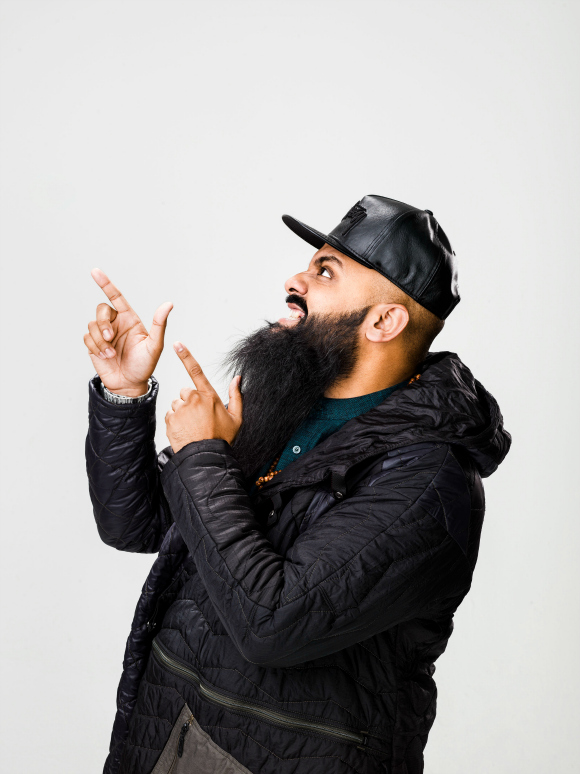 Of the new British Asian talent that’s emerging like Aamer Rahman and Tez Ilyas, Guz tells us: “You’ve got these really talented guys, and it just feels like a bit of a sea change where we’re getting opportunities and still get to be real at the same time.”

He recalls the likes of Aziz Ansari, who has been successful because he writes comedy for the mainstream, and doesn’t limit himself to talking about traditional Asian things.

Guz hopes that more Asian entertainers could tackle comedy in the same way: “I think some of us limit ourselves, and I think that’s very debilitating.

“It’s about keeping it real, and creating material that really is relevant to who you are as a person.”

And it is this concept that certainly inspires Guz in his own comedy:

“My favourite thing about stand up is what I learned from teaching. You’re standing in front of a group of people, and you have to keep them engaged.”

Guz loves the idea of being able to educate, inform and inspire audiences through his stand-up, and quash any preconceptions they may have about him or anybody else that comes from an ethnic background: 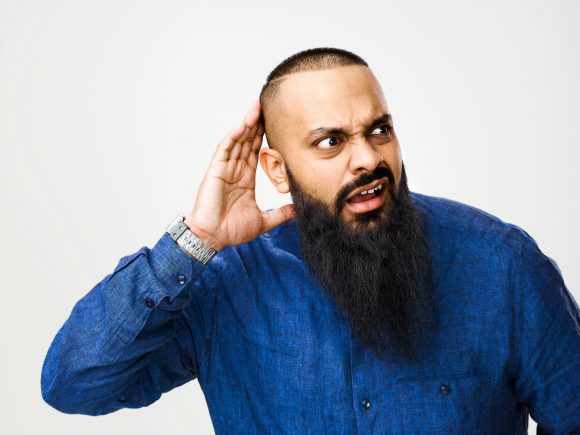 “To be in front of a group of strangers, but elevating the comedy so that they’re going home with a message, that’s what excites me.”

And what makes Guz Khan laugh? “People falling over. That always makes me laugh. I’m laughing right now,” he chuckles.

Mobeen became Guz’s breakthrough into the global online sphere, especially after vlogging about the Hollywood blockbuster, Jurassic World, which featured the infamous dialogue, ‘The Pachys are out of containment‘.

The video, which made fun of a dinosaur called ‘Pakisauraus’ from Pakistan, has since amassed over 800,000 views on YouTube and over 1 million views on Facebook.

It’s incredible to think that such a character like Mobeen has been able to touch so many people around the world and bring a smile to their faces.

Guz mentions all the new-found attention he now receives when he’s out and about:

“It’s all, ‘Mobeen bro, Mobeen, where’s that dinosaur at?’ You know what I mean, I have to avoid Bullring now!”

The sudden success has allowed Guz to give up his day job of teaching and go into comedy full time.

Since then, he has worked very closely with the BBC, filming an iPlayer comedy series called Roadman Ramadan based on his character Mobeen. 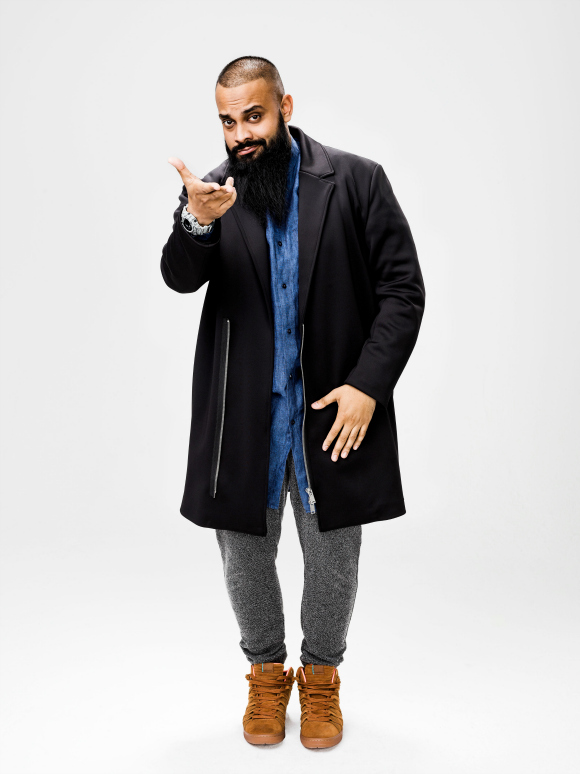 Additionally, he was part of the special 50 Years of Asian Programming, starring alongside the likes of Tommy Sandhu, Shaista Aziz, Aditi Mittal, and Tez Ilyas.

Now Guz Khan has taken on the very big role of radio presenter for the BBC Asian Network with a regular Saturday breakfast show.

Guz tells us that the opportunity to be on a national radio platform is an incredible one: “You know what, it still feels very surreal.”

The natural born entertainer believes that he can offer something very unique to the show, by combining the usual music element with a touch of comedy, so that listeners can truly enjoy the radio experience:

“I’m hoping to take people on a little bit of a journey. A lot of people have come for the comedy than the tunes. There’s a lot of people excited and looking forward to it,” Guz says.

Finally, his advice for any young British Asian wanting to go into comedy?

“I would say, when you write stand-up, don’t be tempted to write very Asian-focused things. Try and write material that’s gonna be very broad. Try and write something original, that everyone can access.

“And also, don’t be coming out there trying to fit in a bracket. You’re still from the ends. You’re still the mandem! So don’t try and change to fit the industry.”

Original, authentic and inspiring – Guz Khan is like a breath of fresh air for British Asian comedy.

You can catch Guz Khan every Saturday morning from 6am on the BBC Asian Network, or listen back on iPlayer.