During a visit to India, British ministers George Osborne and WIlliam Hague have announced plans to build a statue of Mahatma Gandhi in London’s Parliament Square.

"Gandhi’s view of communal peace is as relevant today as it was during his life."

A statue of Mahatma Gandhi is to be built in Britain’s Parliament Square in London.

The ministers were on a visit to Gandhi Smriti, the Ghandi Memorial in Delhi on the second day, when they made the announcement.

The statue is scheduled to be in place next year, in time to commemorate the 100th anniversary of Ghandi’s return to India from South Africa to begin his struggle for self-rule.

A leading British figurative sculptor, Phillip Jackson, known for his statues of the Queen Mother and Bomber Command, has been approached to work on the project.

The statue will be paid for by charitable donations and sponsorship, and will be the eleventh statue to be erected in Parliament Square. Gandhi, who studied in London, will stand alongside other important world figures such as Nelson Mandela and Winston Churchill. 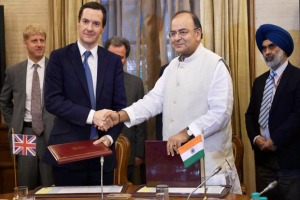 Chancellor George Osborne said of the planned memorial: “As the father of the largest democracy in the world, it’s time for Gandhi to take his place in front of the mother of parliaments.”

Foreign Secretary Hague added: “Gandhi’s view of communal peace and resistance to division, his desire to drive India forward, and his commitment to non-violence left a legacy that is as relevant today as it was during his life.”

Hague continued: “He remains a towering source of inspiration and a source of strength. We will honour him with a statue alongside those of other great leaders in Parliament Square.”

Osborne and Hague made the announcement the day after confirming a £250m deal for British manufacturers to supply missiles to the Indian Air Force.

It is reported that the Indian authorities will receive the air-to-air missiles from MBDA, a weapons maker owned jointly by BAE Systems, the Franco German group Airbus, and the Italian company, Finmeccanica.

The two senior British cabinet ministers are also pushing the sale of the Eurofighter Typhoon jet, which is built partly in Britain.
India is said to be interested in buying 126 fighter jets and to have identified the French Rafale as its preferred choice. Yet there have been repeated delays in the signing of this deal, leaving Britain hopeful they could persuade India to buy the Typhoon. 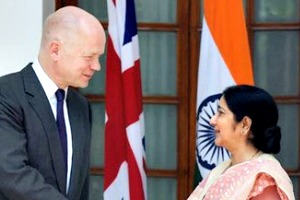 India is an important trading partner for Britain in this area: it is the world’s largest importer of arms, accounting for 14 per cent of total weapons sales.

It has also increased imports of arms by more than 100 per cent over the last five years, according to data from the Stockholm International Peace Research Institute.

There are concerns however about the planned statue of Gandhi being more of a diplomatic action than a memorial.

Tushar Gandhi, a social activist and the great-grandson of the Indian independence leader, said that announcing the statue shortly after a business transaction involving weapons was contradictory:

“The rush to do business with the new government is based on profits and not ethics… It’s pure business. It’s a nice way to apply a soothing balm to their consciences, to raise a statue. How can anybody approve of this?” he said.

Despite the contradictory circumstances in which the proposed statue of Gandhi has been announced, his great-grandson hopes that at least some will see the memorial and take away from it a message of non-violence.

He hopes, along with many others, that the Indian leader will still inspire hope and the statue could still be a message of peace, to the public and even politicians themselves.

Eleanor is an English undergraduate, who enjoys reading, writing and anything media related. Aside from journalism, she is also passionate about music and believes in the motto: “When you love what you do, you’ll never work another day in your life.”
Should the UK Scrap the BBC Licence Fee?
Pavandeep Paul joins Big Brother 2014