Forbes India Tycoons of Tomorrow: Who Wore What?

The Forbes India Tycoons of Tomorrow was attended by many Indian celebrities. Here is a recap of some of the stars and their outfits.

Ranveer was dressed in a Fuchsia pink suit, one only he could pull off.

The Forbes India Tycoons of Tomorrow event was hosted on Tuesday, September 2018, in Mumbai, to award youth icons who are changing India.

They were awarded the Icon of Excellence for their contributions to their respective fields.

People from the world of finance, business and sports were in attendance to collect their awards, recognising the positive impact their contribution is having on India.

A total of 22 people received an Icon of Excellence award.

As with many awards, many of the stars of Bollywood attended the event.

A lot of them were dressed looking to make a statement with their outfit choices.

Some chose subtle, elegant outfits and some decided on a more bold number.

Some Bollywood actors and actresses attended as guests while others picked up their award.

We look at some of the stars in attendance and their outfits.

The Padmavaat actor is not only a prominent figure in the world of film but also his dress sense.

He is known for his flashy and often, unique outfits.

The event was no exception.

Ranveer was dressed in a Fuchsia pink suit, one only he could pull off.

He paired it with a black shirt, finished with a polka dot tie.

When collecting his award, he said he looks up to senior actors like the three Khans (Aamir, Salman and Shahrukh).

He said: The reason they are still around and still working is because they are sincere.”

“They’re masters at what they do.”

Ranveer and his pink suit is one which people at Forbes India Tycoons of Tomorrow will remember for a while. 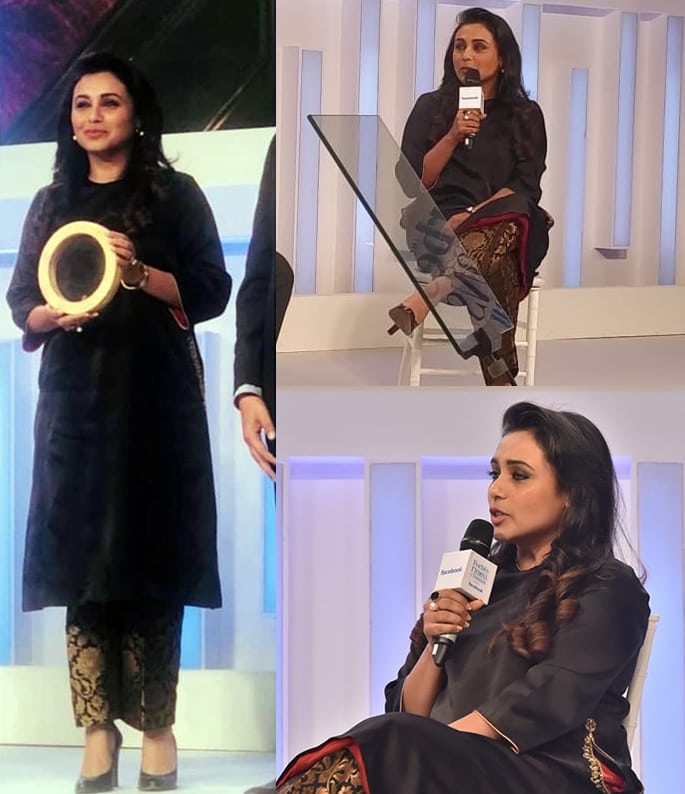 While Ranveer’s outfit got many people talking, actress Rani Mukerji went for a more elegant look.

Another recipient of the Icon of Excellence award, Rani opted for a black kurti.

It was simple but elegant.

Her outfit was teamed with brocade trousers, which had a shimmering gold pattern for that extra wow factor.

The metallic pattern was one which stood out massively in the background of her black outfit.

Keeping with the minimal look, Rani styled it with a pair of black heels.

Her look was finished with a neutral makeup palette and light smokey eyes.

Upon receiving her award for being an Icon of Cinema Rani talked about the hard work as an attribute which goes into making an icon.

She said: “Stars are made with destiny, but you can only be a good actor if you keep honing your skills.”

Rani proudly showed off the award she earned for her long acting career.

Her outfit and inspiring words are one to be remembered at the inaugural Tycoons of Tomorrow event. 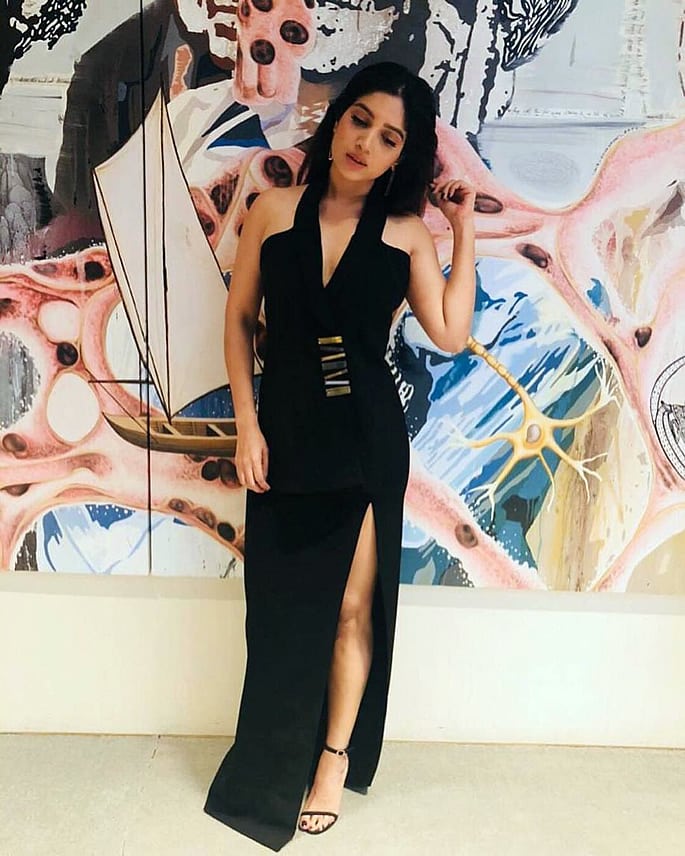 One of the fast-rising Bollywood actresses, Bhumi picked up her award in a glamorous outfit.

She wore a black graphic waistcoat and slit skirt to stand out from the crowd.

The star of Lust Stories had a nude makeup palette with thickly-lined eyes which provided the finishing touches to her gorgeous outfit.

Her success in the Netflix provided the platform for her to go on and star in Bollywood cinema. She says it is down to people have easy access to it.

Bhumi said: “The small screen is taking off simply because people need to take time out for entertainment.”

“They are mostly watching it on their way to work or back, so it’s important to have it in your pocket.”

Bhumi will continue to emerge as one of Bollywood’s most popular actresses as well as fashion icons. 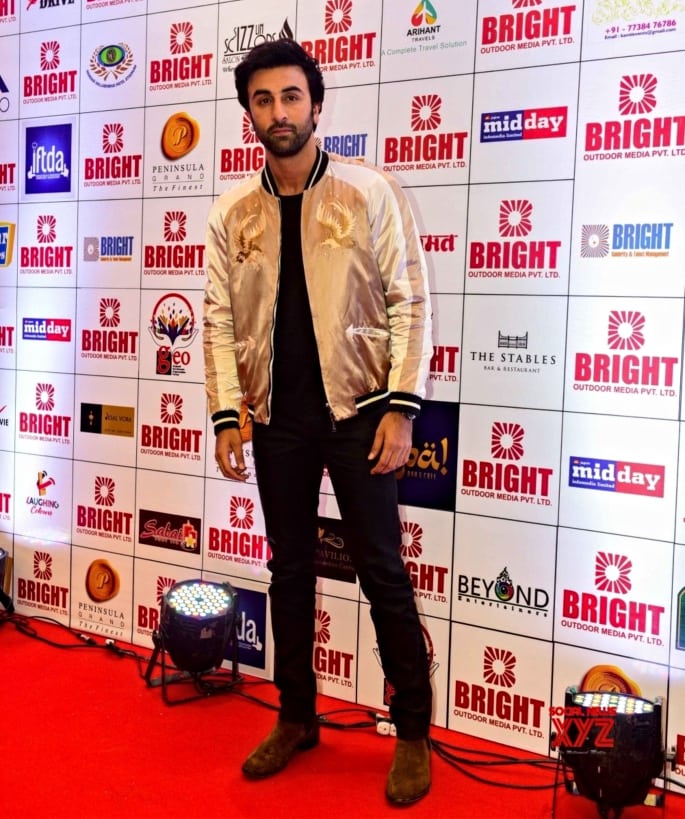 Ranbir is no stranger to extravagant outfits.

Like Ranveer, Ranbir Kapoor also decided on going for a bold outfit choice.

Although he did not win an Icon of Excellence award, he will still be talked about at the event thanks to his standout fashion choice.

He wore a pastel gold jacket which had a shiny effect.

The star often goes for subtle colours when attending events, but for this one chose a more unique approach.

His shimmery jacket was one of the events fashion highlights during the evening. 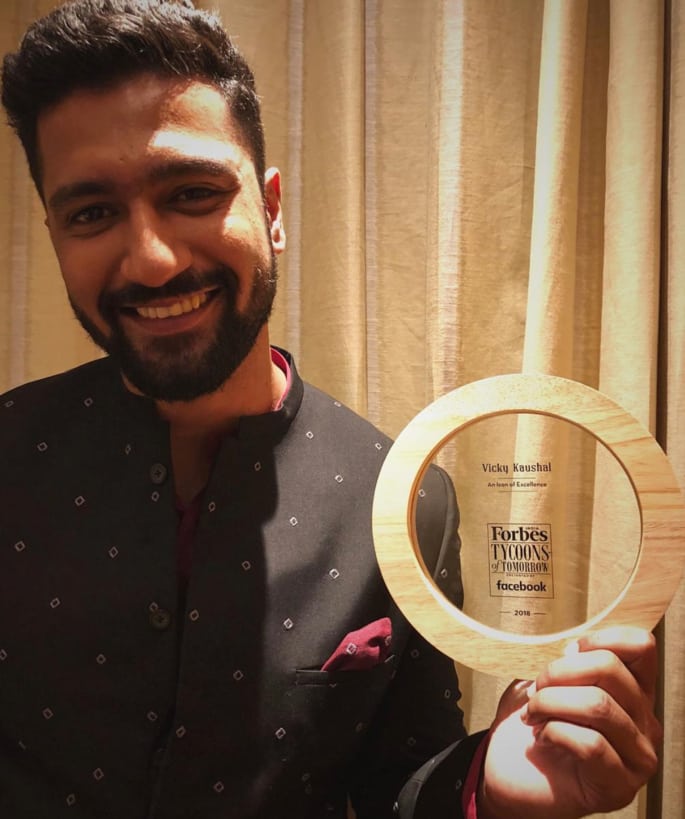 The emerging actor has gained huge popularity with five releases in 2018, including Lust Stories.

Vicky is also becoming very popular in the fashion department when attending Forbes India Tycoons of Tomorrow to pick up his award.

He looked dapper at the event, wearing a printed black outfit teamed with a pair of suede moccasins.

It was a simple outfit but one which made a statement.

Before his acting venture, Vicky was on the other side of the camera as the assistant director to Anurag Kashyap.

It was to understand the art of film-making before he pursued acting.

Vicky will only continue to grow as an actor and in popularity in the future. 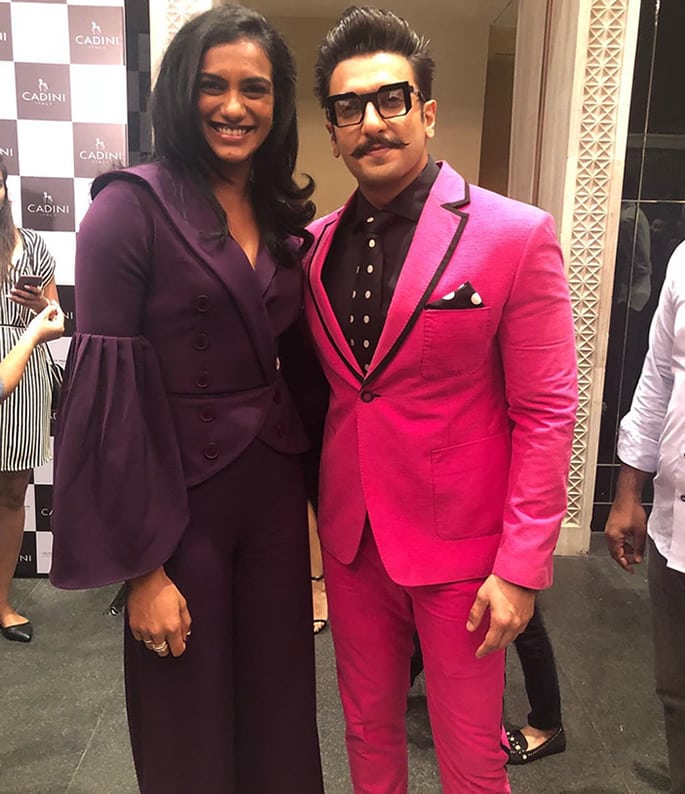 Badminton star PV Sindhu attended the event in dark purple two-piece suit. The jacket had flairs at the arms and a very nice design of lapel with a double-buttoned finish.

Thrilled to meet up with Ranveer Singh, Sindhu has been an excellent example of an Indian woman paving the way for future female sports stars.

The outfits by these celebrities are completely unique to one another.

Their fashion choices reflect their personalities and their character.

One thing is for sure, the dress sense shown by them at Forbes India Tycoons of Tomorrow will be remembered by fellow guests.