DESIblitz brings you all of the fantasy football tips you need to stay ahead of your competition over the busy winter period in the English Premier League.

“It’s really important to have a balanced team, with a strong bench which you can rely on."

DESIblitz are back to give you the fantasy football tips you need to help you through the busy Premier League winter period.

Each side will face ten Premier League matches between November 18 and December 31, 2017. And that makes for mouth-watering English Premier League action to look forward to every four days.

But such a hectic fixture frenzy in England’s top division leaves fantasy football players with a responsibility to keep up.

In order to stay ahead of, or catch up with, your fantasy rivals over this busy period, planning is crucial. So DESIblitz brings you all the fantasy football tips you need to help you through this critical winter period.

We also hear exclusively from our current fantasy premier league leader and remind you of how you can join our special DESIblitz league.

All player prices are points totals in this article are based on the free-to-play fantasy football site, fantasypremierleague.com. 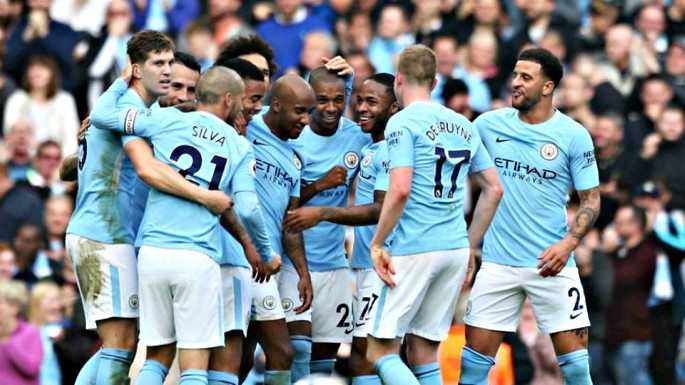 It’s been a scintillating start to the 2017/18 English Premier League season, with Manchester City scoring freely and racing ahead.

Despite being relatively early in the season, City are already eight points clear at the top of the table. Their 10 wins and 1 draw from eleven matches mean they are yet to taste Premier League defeat in 2017/18.

With 38 goals, The Citizens are also the highest-scoring Premier League team so far in the 2017/18 season.

And they are showing quality at both sides of the pitch too. Conceding just seven goals domestically, City have the joint-second best defence (with Tottenham) in the league.

It is, however, their city rivals, Manchester United, with the toughest Premier League defence so far. 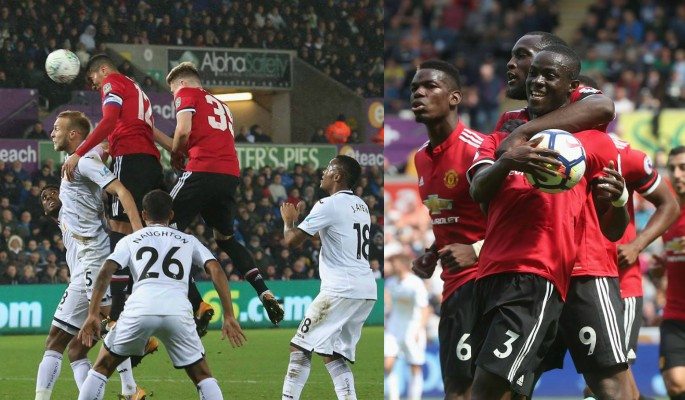 The Red Devils have let in just five goals in their eleven Premier League matches. But their negative playing style is not pleasing many supporters.

“There is alot of criticism going to Mourinho’s tactics. My problem is the lack of attempt United made to have a go at Liverpool’s weak point – their defence. United must play more attacking football.”

Since that match, United have lost to Huddersfield and Chelsea, by scorelines of 2-1 and 1-0, respectively. They did, however, beat their title rivals, Tottenham, 1-0 at Old Trafford between those two defeats.

While the two Manchester sides lead the Premier League table, Crystal Palace are a team who are really struggling.

But with their talisman, Wilfried Zaha, back in the side, and Christian Benteke nearing a return, their fortunes could soon change. So which players are proving to be most influential so far in the 2017/18 season? 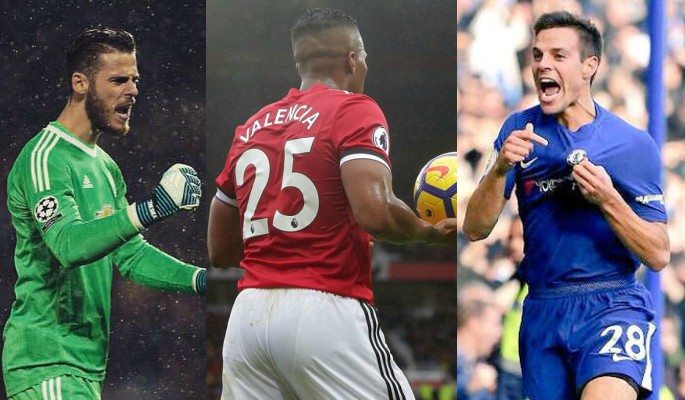 Huge amounts of money were spent on bringing record transfers to the Premier League for the 2017/18 season. But which players are leading the way statistically and in fantasy football?

With Manchester United having the best defence so far, David de Gea is the top-scoring fantasy football goalkeeper.

His 65 points put him ahead of Huddersfield Town’s Jonas Lossl (£4.6m – 56pts) and Southampton’s Fraser Forster (£5.1m – 51pts). However, de Gea’s price of £5.7m also makes him the most expensive ‘keeper in the game. Can you afford his reliability?

His Manchester United teammate, Antonio Valencia (£6.7m-61pts), is one of only two defenders to pass 60 fantasy premier league points.

But with 1 goal, 5 assists, and 5 clean sheets, Chelsea’s Cesar Azpilicueta is currently the best fantasy football defender. Those incredible statistics for a defender give Azpi a price of £6.8m and a points total of 67. 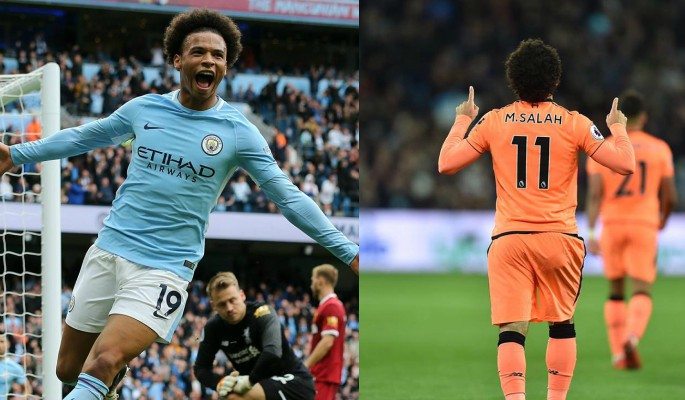 The top-scoring player in the whole game so far, though, is Manchester City’s Leroy Sane (£8.9m – 73pts). Liverpool’s Mohamed Salah is following very close behind. The Egyptian is now on 72 points with a price of £9.4m in the game.

Tottenham’s Christian Eriksen, who recently struck a hat-trick to help send Denmark to the 2018 World Cup is between the two City players on 63 points and a price of £9.7m. 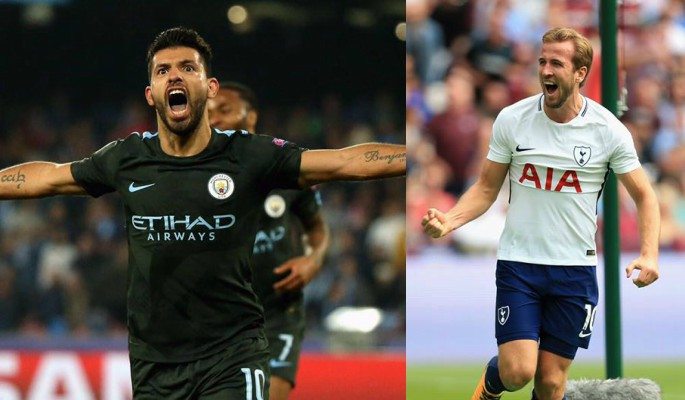 Sergio Aguero (£11.8m) and Harry Kane (£12.8m) are the leading Premier League forwards so far with 8 goals each. But can you afford them?

However, with potentially tricky games coming up against Huddersfield, Southampton, Man United, Tottenham, and Newcastle, can they keep it up over the busy winter period?

Squad rotation is also something you have to be careful of when choosing Man City players for your fantasy football teams. Of all their midfielders and forwards, Kevin De Bruyne and David Silva offer the best consistency. 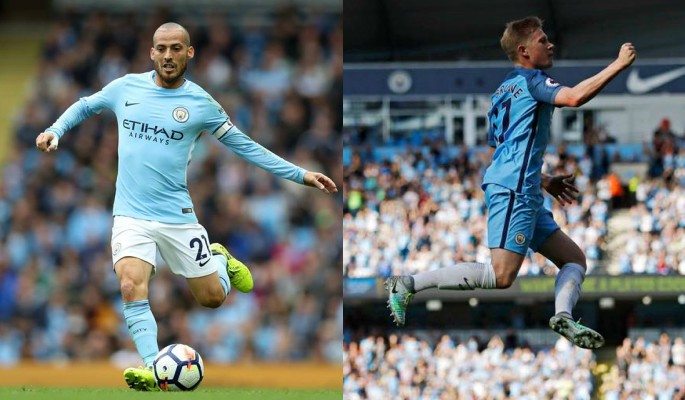 But for his slightly cheaper price and having more assists, DESIblitz recommends in investing in David Silva.

Romelu Lukaku is once again struggling to score against higher quality opposition. He hasn’t found the target this season in games vs Liverpool, Chelsea and Tottenham.

However with eight of United’s next ten matches coming against lower-level opposition, perhaps Lukaku will return to his goal-scoring ways.

DESIblitz though, recommends investing in Chelsea’s Alvaro Morata. At £10.3m, the Spanish striker is cheaper than Lukaku, Aguero, Jesus, and Kane.

Seven of Chelsea’s next ten opponents are in the bottom half of the table, giving them a slightly easier run of games in comparison to their rivals.

But beware of Champions League football affecting Morata as Chelsea are not in as secure of a position as Tottenham, United, City, and Liverpool, in the competition. 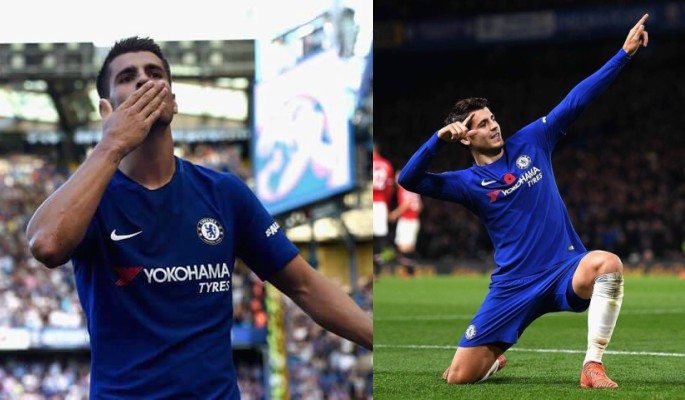 Defensively, only Man City, Man United, Tottenham, and Burnley have let in less than ten goals. Chelsea (10), Newcastle (10), Brighton (11), and Southampton (11) are also doing well at the back.

But what does the expert think? DESIblitz speaks to the man who is beating 75 other players in our special fantasy football league for his opinions.

At the beginning of the 2017/18 season, DESIblitz brought you some fantasy tips and tricks to help you start well. We also gave you the unique opportunity to compete against us, and each other in a special fantasy football league. 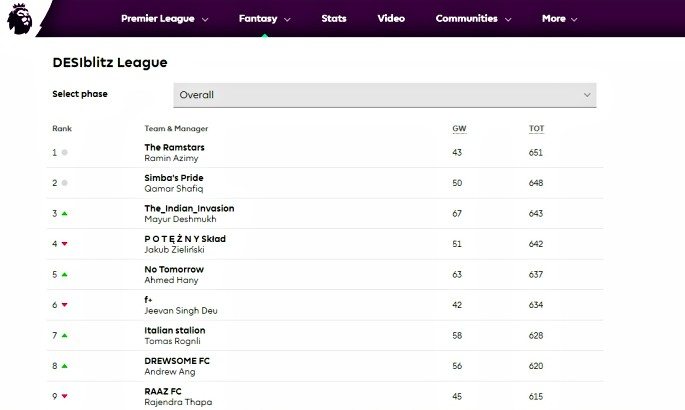 And currently leading the way out of all 76 players in our league, is DESIblitz reader, Ramin Azimy. With 651 points, Ramin is in the top twenty-five thousand out of 5.5 million global fantasy premier league players.

So DESIblitz speaks to him to bring you his personal top tips for doing well in fantasy football. Here’s what our league leader says:

What’s your top piece of advice to a fantasy football player?

“It’s really important to have a balanced team, with a strong bench which you can rely on.

“This helps to save on transfer costs if one of your main players is suspended or has a minor injury. Do not waste your free transfers.”

Why do you think you’ve done so well so far?

“I’m doing well because I realise that defenders are not being appreciated by other players. I have been relying on a strong defence which some users may call too expensive.

“But defenders offer better value for price in comparison to midfielders. So I have been relying on a 5-2-3 formation where I save money in midfield to invest in better strikers.

“I have also made sure to buy attacking defenders rather than centre-backs due to their ability to get goals and assists.” 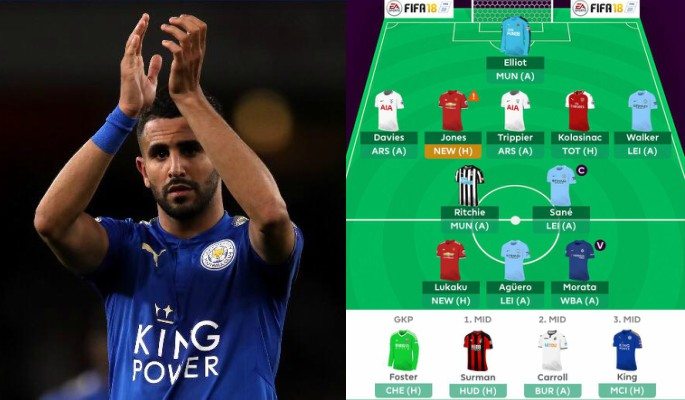 Which players are doing the best for you?

“Pogba initially did really well for me, but since his injury, I have not been relying on any single player.

“In terms of consistency it has been Lukaku and Jones, but it’s been players like Silva, Kane and Aguero who have got me big points in certain weeks.”

Do you think you’ll be top at the end of the season?

“[Laughs] that’s a difficult question, but I am confident that I’ll be in the top three.

“Many players tend to change their team too quickly when a player doesn’t do well. But I am more patient and trust my instincts.”

Do you think you have what it takes to stop Ramin from winning our 2017/18 fantasy football league? If so, then join our special league by following these simple instructions.

1) Open this link to Fantasy Premier League in a new tab, and click ‘Sign Up Now’ on their homepage. If you have already signed up to the free site, then skip to number 6.

3) Confirm your email address (this may take a couple of minutes).

4) Now you are ready to choose your squad of 15 players for a budget of £100m. You can click the ‘Auto-Pick’ option if you need help picking players.

5) Click ‘Enter Squad’ once you’ve perfected your team. Then you can choose a fun team name!

We look forward to seeing you join our fun and free league to test your fantasy football skills!

Images courtesy of the official Facebook pages of each of the footballers featured in this article, and their respective football teams.