A family from Birmingham went to Turkey in what was supposed to be a 5-star holiday. However, it turned out to be a nightmare.

"We were robbed of our hard-earned money."

A trip to Turkey turned into a nightmare for a Birmingham family when they found that their 5-star holiday resort was closed.

After discovering that their luxury beach resort was closed, they were given a replacement.

However, Rubeka Hussain claimed it was a “hellish hotel” with a bright green, fly-infested pool, which gave her two-year-old daughter an eye infection.

Mrs Hussain had booked an all-inclusive trip to Didum Beach Resort, costing £1,650 in total, through Teletext Holidays after losing their original flights with Thomas Cook during September 2019.

The seven-night holiday was supposed to be an anniversary treat for Mrs Hussain and her husband Wasim Khan. It would also be their daughter Isla Khan’s first holiday.

However, when they arrived, the couple found out it had closed for the season just a day before and they were instead moved to another hotel.

“When we arrived the taxi driver took us outside the hotel and the guard outside told him that this hotel is closed and we need to go next door.

“But when I booked the agent told me everything will be open as I made it clear I want entertainment and amenities.

“We were robbed of our hard-earned money. We booked for a five-star resort.”

They were moved to the Elegance Hotel, which they claim was a disaster.

“This Elegance Hotel was not even a two-star in my opinion along with many holidaymakers that were in the same position as us.”

Mrs Hussain was shocked by the state of the hotel and stated that her daughter ended up with an eye infection from the green “filthy” pool.

The family complained to Teletext Holidays, claiming that there were exposed wires, brown water coming from the taps, a stinking apartment and centipedes crawling on the bedroom floor.

They also complained about no entertainment even though it had been promised, difficulties getting hold of the reps and a blocked off fire exit. 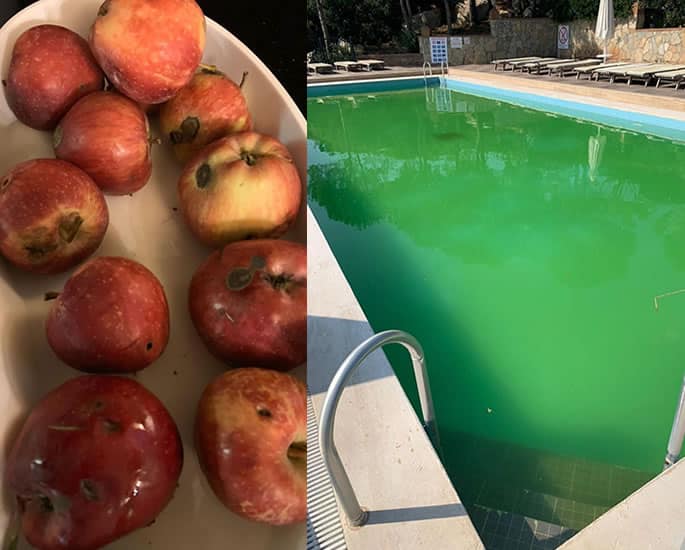 “We booked all-inclusive so we wouldn’t have to worry about going out to eat, but the food was inedible.

“Drinks were only fizzy so nothing for a young child.

“The pool was dirty, green and had loose wiring and caused my daughter to catch an eye infection.”

“It was because they didn’t clean it. I think the cleaning filter was off/not working.

“They had two pools and the second one was closed because a girl cut her foot on the cracked tile.

“They offered to change our hotel when we called to complain, but we just wanted to come back to the UK. We were lied to and given false promises.

“This was meant to be a holiday but I’ve been so stressed in Turkey and now that we are back the stress continues.”

Birmingham Mail reported that Mrs Hussain went on to say that she has still not received any compensation or a refund.

Teletext Holidays have explained that the complaints are being investigated. The company has also apologised for the distress caused to the family.

A spokesperson for the company said:

“Teletext Holidays prides itself on its high level of customer satisfaction, and are committed to putting clients first and making sure their needs are met.

“As such we were disappointed to hear that our client didn’t enjoy her holiday.

“We do offer a fair and reasonable complaints policy, and the complaint which Mrs Hussain sent to our customer relations team today has been acknowledged and is now being thoroughly investigated.

“We extend our apologies for any inconvenience and distress caused.”