Deepika Padukone has been revealed as the top Bollywood star on Instagram. She has the most followers on the platform, surpassing Priyanka Chopra and SRK!

In addition, she also hails as the most followed Asian woman on Twitter.

If we asked you to quickly name the top Bollywood star on Instagram, you’d likely say Priyanka Chopra or SRK. But, in perhaps a surprising twist, Deepika Padukone is the Hindi celebrity to hold this title.

On the social media platform, Deepika currently has a staggering 20.2 million followers! With this top spot, she surpassed the likes of Katrina Kaif (5.8 million), Alia Bhatt (18.7 million) and even SRK (9.8 million).

Comparing the figures together, Deepika’s followers make those of her fellow actors seem rather slim.

In addition, she also hails as the most followed Asian woman on Twitter. The actress gathered roughly 21.5 million followers; even more than on Instagram.

But how does she then compare with Priyanka Chopra? Well, the Baywatch star has a large fanbase herself, but she falls slightly short with just 20 million followers. For some, this may seem surprising if we look at the starlets’ careers.

Not to mention her upcoming role as ‘Maharani Padmavati’ in the 2017 movie Padmavati.

Meanwhile, Priyanka entered the US’s radar back in 2015 with her feature role in Quantico. With a third season on the way and an appearance in the Baywatch reboot, PeeCee has a growing US career.

She also previously starred in popular Bollywood films, such as Mary Kom (2014) and Dil Dhadakne Do (2015). Despite this, it seems Deepika is the top Hindi star to follow.

Another interesting factor to consider is the stars’ social media activity. If we consider Deepika, she posts less frequently than fellow celebrities and doesn’t usually interact on social media. However, she doesn’t personally use her accounts; instead, her PR handles them.

But they publish posts in a strategic way that they reach a high proportion of social media users. 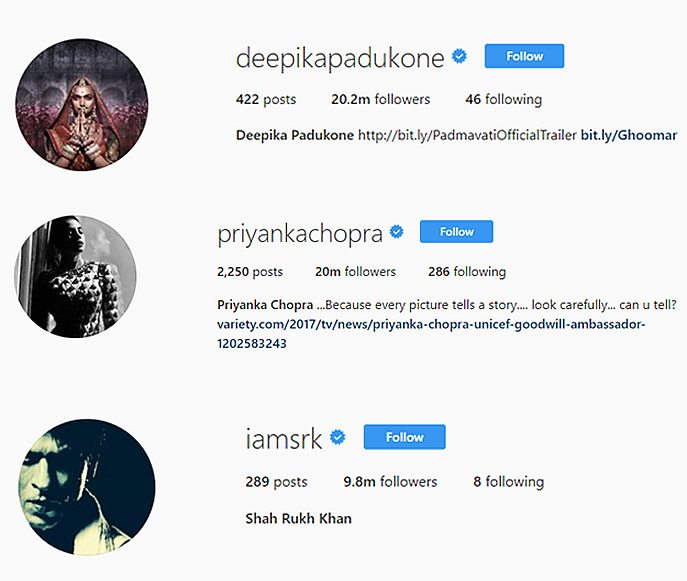 Looking at the likes of Priyanka and SRK, they will access social media. Posting their own images, tweets and engage in great interaction with their followers. Take this example of when SRK responded to Antonio Aakeel’s birthday message to him.

Subin John, a digital media expert, explained to UNI India that this interaction is important for popularity. He said:

“These days, celebrities hardly get time to keep their fans updated about their activities but one cannot ignore the fact that to prevent the fans from losing interest, the celebrity needs to make them feel available by sparing few minutes in a day at least.

“If not so, a PR team can be hired to keep the followers engaged.”

While Deepika has the highest popularity, we could see other Bollywood stars overtake her due to this interaction.

But with Padmavati soon to release on 1st December 2017, she may hold the title as the top Bollywood star on Instagram a good while longer.