Dressed in a printed shirt and a pair of green trousers, Deepika Padukone looked stunning on the first day of the Cannes Film Festival.

"Deepika Padukone is a huge star in her country."

Deepika Padukone is all set to take over Cannes Film Festival.

And this time, not as a brand ambassador for L’Oréal but as a member of the jury.

Photos shared by the actress show her strolling along the beach in a printed grey-green shirt with matching green trousers.

She posed against the sea and soaked in the morning sun.

Deepika looked every bit stunning. She also wore a heavy assemblage of jewels to complete the look.

The Tamasha actress channelled a boho vibe as she posed by the beach.

She styled her printed shirt and green pants with statement accessories featuring a heavy bejewelled necklace and a dainty pair of dazzling earrings.

A printed headband and embellished heels further added oomph to her look.

Every year, the Cannes Film Festival selects a jury of eight from the world of cinema to choose the winner of the Palme d’Or and other awards from its main competition.

Vincent Lindon, who won the best actor award at Cannes in 2015 for The Measure of a Man and starred in 2021’s Palme winner Titane, is presiding with an illustrious team of actors and directors. 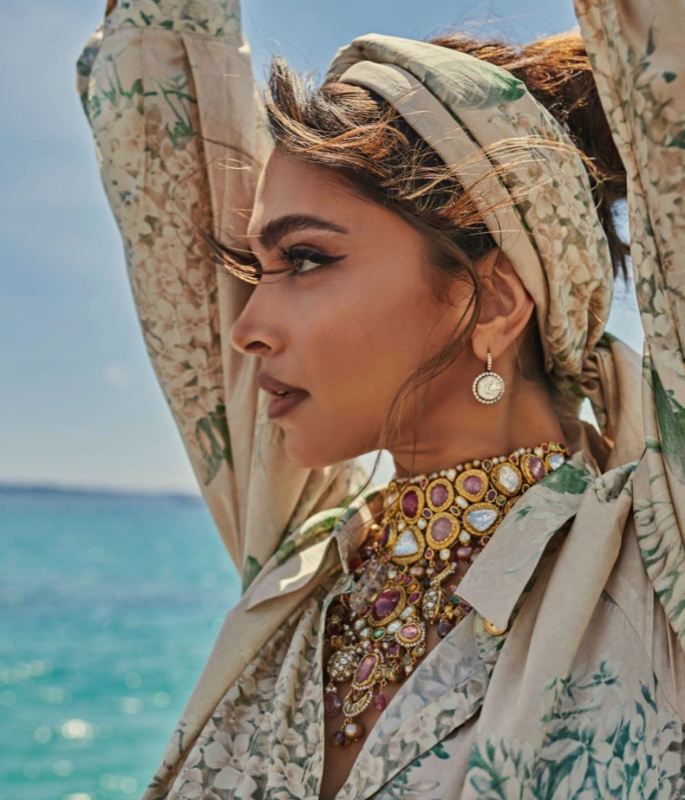 In a statement, Cannes said: “Indian actress, producer, philanthropist, and entrepreneur Deepika Padukone, is a huge star in her country.

“She is also the principal of Ka Productions, the production company behind Chhapaak and 83, in which she also starred, as well as the upcoming film The Intern.

“Credits include Gehraiyaan and Padmaavat, as well as the award-winning and critically acclaimed film Piku.

“In 2015, she set up The Live Love Laugh Foundation, whose programs and initiatives aim to destigmatise mental illness and raise awareness about the importance of mental health.

“In 2018, Time Magazine named her one of the 100 Most Influential People in the World.”

The Red Carpet event at the 75th Cannes Film Festival will be a gala event as celebrities across India are set to walk there as part of the Indian delegation on the festival’s opening day.

The list of celebrities will also comprise stars from major music industries across India.

The delegation will include R Madhavan, Akshay Kumar, AR Rahman, Nawazuddin Siddiqui, Pooja Hegde and Nayanthara along with Prasoon Joshi, Shekhar Kapur and Ricky Rej amongst others.

Ravinder is a Journalism BA graduate. She has a strong passion for all things fashion, beauty, and lifestyle. She also likes to watch films, read books and travel.
Janhvi Kapoor displays Hourglass Figure in Shimmering Gown
10 Most Expensive Handbags of Bollywood Stars