Aamir Khan goes from ‘Fat to Fit’ in Transformation for Dangal

The perfectionist Khan of Bollywood, Aamir, has been making headlines courtesy his unbelievable body variations for his upcoming release, Dangal.

After the stupendous success of PK at the box-office, Bollywood superstar, Aamir Khan, is all set to light up the silver screen yet again, with Dangal, a much-hyped biographical sports drama slated for release from December 23, 2016.

Aamir belongs to the rare category of actors who believe in making their onscreen roles seem real to the audiences and hence take upon themselves extreme challenges to achieve their goals.

Walking in this direction, the versatile actor put on oodles of weight and also lost it successfully by training hard at the gym.

In Dangal, Aamir portrays the character of Mahavir Singh Phogat, a former Haryanvi champion wrestler,  who takes up the enormous responsibility of teaching wrestling to his daughters’ Geeta Phogat and Babita Kumari, by fighting against all odds.

As the storyline required Aamir to play both an old father and a young wrestler in the movie, he took up the mantle of depicting the wrestler’s two distinctive roles, to sheer impeccability.

The aged Mahavir Singh Phogat, at 60 years had to look obese, therefore Aamir piled up around 30 kilos and ultimately weighed a massive 98 kilos while filming the scenes of an old man whose only dream is to get his country, India, a gold medal in wrestling, at an international podium.

“I suggested to the director that I should put on weight first as 80 percent of the film revolves around my fat avatar. Also, if I shoot those parts later then I will be left with no motivation to shed the extra kilos,” informed Aamir. 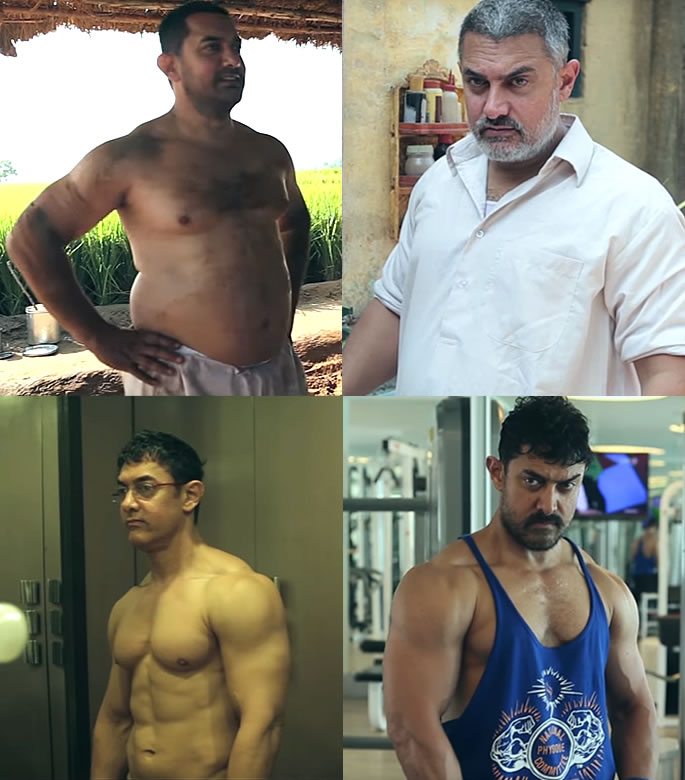 Aamir also lost all the accumulated weight to convincingly essay the role of a 20-year-old ambitious wrestler Mahavir, who despite giving his best is unable to secure a gold medal for his nation during his heydeys.

“Though Aamir Khan had the option of wearing a body suit to appear like an old man having a paunch he refused to use it”, says the director of Dangal, Nitesh Tiwari.

Aamir instead took to unhealthy eating habits to gain weight: “I could eat and drink anything I wanted. And have a great time.”

The brilliant actor says putting on all the fat was enjoyable and easy but losing it was a daunting task.

In the YouTube video made by UTV Motion Pictures’, called ‘Fat to Fit, Aamir Khan has been filmed struggling at the gym, to get back into shape. The audio-visual shows how there were some days when the Dhoom 3 star, would simply give up to rigorous training meant to make him look healthy and fit weighing about 70 kilos. Watch it below: 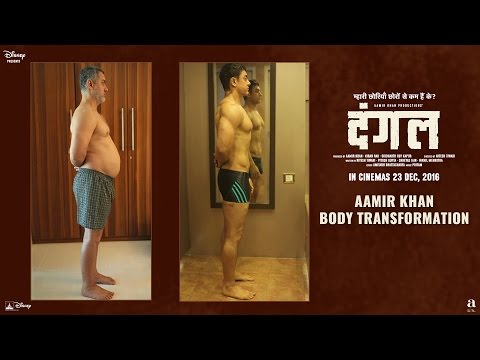 This is when his fitness trainers’ Rahul Bhatt and Rakesh Udiyar come to his rescue. For a period of five months, they motivate Aamir Khan at each step towards losing weight, put him on a strict diet and as an end result help the 51-year-old superstar flaunt an enviable body, with toned abs, sculpted biceps and an overall muscular structure.

“I would like to mention that putting on weight and losing it so fast is very unhealthy. I did it because of professional requirement for my film under the supervision of health experts. But I would not advise the same for any regular person.”

Apart from gaining and losing weight for the ambitious project, Aamir Khan, also took up classes to learn Haryanvi language and learnt the tricks of wrestling to make his performance effective in the film.

Given Aamir Khan’s track record in delivering blockbusters, Dangal too appears to be a promising movie to watch out for, with excellent performances by the entire cast.

Mariya is a cheerful person. She is very passionate about fashion and writing. She also enjoys listening to music and dancing. Her motto in life is, "Spread happiness."
Shahrukh teaches Alia Love and Life in Dear Zindagi
Kahaani 2 with Vidya Balan is Smart and Suspenseful