The very talented Dabboo Ratnani has returned with his celebrity inspired calendar for 2014. Showcasing some of the biggest stars of the Bollywood fraternity in a way you’ve never seen them before.

"There’s no calendar which has sustained for so many years especially which features so many stars."

Dabboo Ratnani is a celebrated fashion photographer who has been capturing the glitz and glamour of the Indian film fraternity for the last 15 years.

He has shot some of the biggest and most sought-after stars of B-town, and his images have graced the cover of many notable magazines.

His annual calendar, featuring both veteran legends and new and upcoming stars, is a must-have, and a collectible trend for many.

Notably Dabboo’s passion for photography began from an early age. He bought his first good camera at the age of 16. 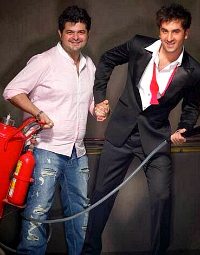 He then learned the art of photography working as an assistant for various photographers and this introduced him to the world of film photography. After four years of close shadowing, he became a professional at the age of 20.

Now much of the Bollywood fraternity swear by him, including the likes of Amitabh Bachchan, Shahrukh Khan, Bipasha Basu, Arjun Rampal and Abhishek Bachchan who all regularly feature in Dabboo’s calendars. Speaking about the calendar, Dabboo says:

“I was the first person to bring out such a calendar and am still the only one with whom actors shoot for a calendar. There’s no calendar which has sustained for so many years especially which features so many stars.”

The launch of each annual calendar is also a big event with most of Dabboo’s celebrity friends joining him as he unveils his 24 stunning photographs for that year and 2014 was no different.

This year sees the 15th anniversary of Dabboo’s calendar, and the photographer has outdone himself once again. Veteran Amitabh Bachchan looks very dapper in his tux and bow tie, and adding chic and sophistication to any setting that he is in, he makes the colourful auto rickshaw he is driving look like a Rolls Royce. Abhishek follows the transport theme as he is seen in all-white perching on the bonnet of a broken down car. 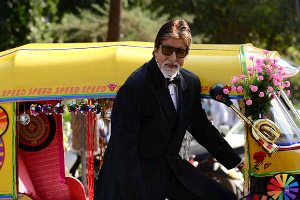 Khiladi number one, Akshay Kumar has been captured in true action hero style. Shaving his beard wearing ray bans and with a matchstick in his mouth, he looks like the ultimate Italian-inspired Mafia don.

Ranbir Kapoor looks sexy and determined in a suit and a loose red bow tie while dragging a fire extinguisher. Our ‘Bhai’ Salman Khan keeps it simple in a black and white close up which sees him gazing thoughtfully into the camera with his hands interlocked.

One of our favourites has to be calendar regular and close friend of Dabboo, Shahrukh Khan. King Khan hits all the right buttons in his shot. Relaxing on red silk sheets, his tie and white shirt are all but undone.

His suit jacket is loosely thrown on the side and he has a cigarette and an ashtray to keep him company. The black, red and white colour scheme works wonders and he truly looks like royalty. Speaking about his relationship with Shahrukh, Dabboo says:

“Shahrukh and I have been working together, rather I have known him personally, ever since he came to Bombay to be an actor. I knew him more through our common friends and I’ve seen him when he was an absolute nobody!”

Speaking about his relationship with the stars, Dabboo explains:

“The bigger the actor, the less tantrums they have. I feel senior actors like Mr. Bachchan, Shahrukh, Hrithik, they completely trust the technicians they’re working with and give complete respect to them.”

Of the heroines, Dabboo has captured a more edgy and temptress side to them. Deepika Padukone, dressed in black with heavily kholed eyes, sits atop a dressing table surrounded by film lights and cameras.

She is the perfect epitome of a Bollywood leading lady, and Dabboo has intuitively captured the success of the last year for this heroine, which has made her one of the most successful female actors right now.

Kareena Kapoor Khan looks stunning in a simple dress and wavy hair as she sits on a luxury leather armchair. With the perfect pout and shoes, Kareena looks the business. Another black and white print shows a close-up of Katrina Kaif as she gazes doe-eyed into the camera lens. Blown out hair and a statement necklace make this look. 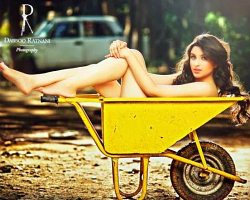 International icon, Priyanka Chopra almost jumps out at us in her playful shoot. Carrying a polaroid in one hand, she holds a selfie between her teeth and screws her face at the camera. Wearing a cute black and yellow outfit, she looks adorable.

Vidya Balan oozes sex appeal with nothing but luscious heroine-esque locks and a statement necklace that covers her modesty. She adds a whole new dimension to ‘Dirty Picture’.

Alia Bhatt, a newcomer to the film industry sheds her sweet girl look in her nude capture. With dark lips and holding a black cat that covers her chest, this pretty girl is bold and beautiful.

Sonakshi’s biker chic look has to be another favourites. Everything is perfect in this shot, from the hair, accessories, and make-up. She looks raw, edgy and beautiful. Parineeti Chopra has to be one of the most promising up and coming talents in Bollywood right now. This bubbly babe shows she is not afraid to bare all as she sits nude in a yellow wheelbarrow in a rustic setting.

Once again, Dabboo has shown that he is not afraid to take risks, his understanding of the showbiz world is second to none and he manages to perfectly capture the emotions and feelings of all his subjects.

Dabboo is able to balance the light side of Bollywood with the dark, and with his unique lens and eye, allows fans in on a wholly unique side to Indian showbiz.