"We have tried to tell a very honest and emotional story"

It follows the lives of an off-beat yet utterly relatable Pakistani family living in Karachi as they navigate the strange waters of growing both older and apart.

The narrative follows an ageing father (Mohammed Ahmed) of the Jamali family who falls seriously ill. As a result, his eldest daughter and sole caregiver, Zareen (Aamina Sheikh), is forced to reconnect with her sister, Zara (Sanam Saeed), on her return from London.

However, the two narratives are nothing alike. In fact, the family secrets that are concealed by the parents and siblings in Cake, including the growing tensions between them, are far darker and more complex.

The ambiguity of the film, helped predominantly by its vague title, is purposefully done by Abbasi. After watching the film, we can deduce that the film offers multiple layers and unravels various emotions. We find ourselves stunned by the lengths that parents will go to protect their children and the undeniable rifts between class and religious minorities.

What Asim Abbasi gets right is depicting the entire sentiments of the family. As well as the anger and frustration that simmers, he also denotes moments of happiness and laughter. 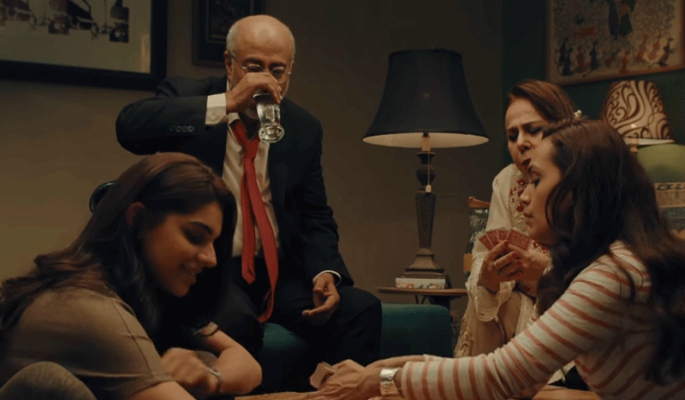 In fact, the lighter scenes are truly endearing. Especially when we see the family playing cards and the father suddenly fart in front of his daughter. This will definitely leave you in stitches.

The modern depiction of Pakistan is both refreshing and inherently relevant. There is no attempt to censor thoughts, words or ideas in the film.

The mother casually throws the word ‘Haraami’ without hesitation, and the love story between the father and mother is of an epic scale, one to rival even the most beloved of Bollywood romances.

This is further aided by the stunning cinematography and excellent direction. There is subtle symbolism throughout.

From the burning grass to the tranquil water, summarising how although the family burn with hidden secrets on the inside, they appear calm and happy on the outside. Cinematically beautiful, these shots do well to outline the film’s main plot and narrative arch.

And then, of course, we have the performances. To begin with, Aamina Sheikh as Zareen is mind-blowing.

Playing the formidable sister who hides everything and being the sole-carer of her parents, Sheikh essays this character with much sensitivity.

Whether it is the sequence where she is enjoying a night out or an emotionally charged scene, Aamina switches to both moods with ease.

Sanam Saeed is dynamite as Zara. Being financially secure and settled in London, she is the sister who is haunted by a sinister past. 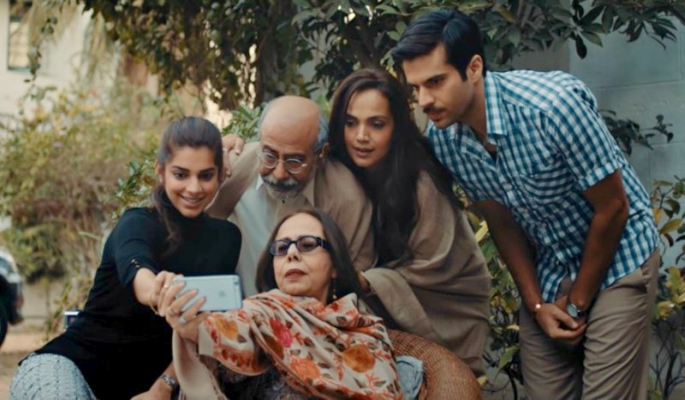 Through the film, Sanam tells DESIblitz what she hopes Cake will convey to the audience:

“Remembering that it is important to balance family with your personal life. The reality is that our parents are getting old and we must look after them. The beauty of this [film] is that it is a reminder that no one will take care of your parents as well as you will. The family is everything.”

She does not play Zara, she becomes her. And rather than overdoing her fiery character, Sanam Saeed enacts this part with gusto. Furthermore, her rapport with Aamina is excellent. The viewer becomes convinced that the two actresses really are sisters.

The real show-stealer though, is Beo Raana Zafar, who plays Habiba, the mother.

What shines through are the small idiosyncrasies of her character. For example, in one moment she will squabble with her daughter, and then the next, she will put on lipstick and discuss her Instagram selfies.

These nuances work very well and will certainly strike a chord with the audience. 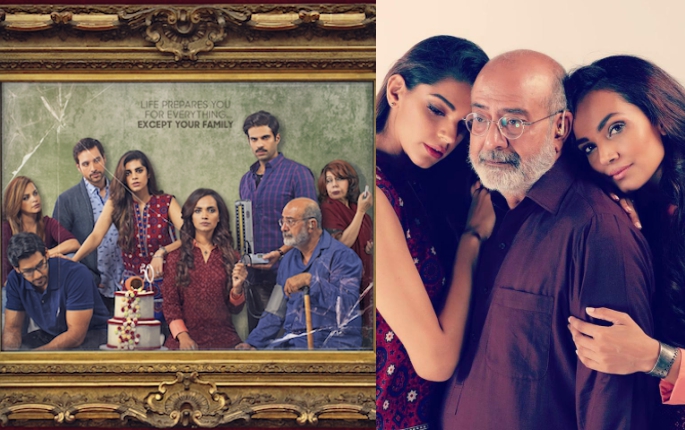 Mohammed Ahmed plays the ailing father superbly. As the decisive head of the family, he regrets the one wrong decision which he made with Habiba.

Ahmed performs his part so well. The audience can really feel the love he has for his family and most importantly for his daughters, even if this is at the expense of others.

There are many scenes performed by Mohammed Ahmed which will bring a tear to the eye. One, in particular, is when he sings ‘Ek Pyaar Ka Nagma Hai’. Also, the way he slow-dances with his daughters leaves the viewer feeling quite numb.

Adnan Malik plays Romeo, the carer of Zara and Zareen’s father. Although Adnan does not have many dialogues or as much screen-time as Aamina and Sanam, he, nonetheless, offers a solid presence.

One cannot help but admire and respect his character. And Adnan brings a wonderful subtlety of expression to the film to perfectly contrast the fiery emotions of the sisters.

Watch our full interviews with the cast and director in our playlist here: 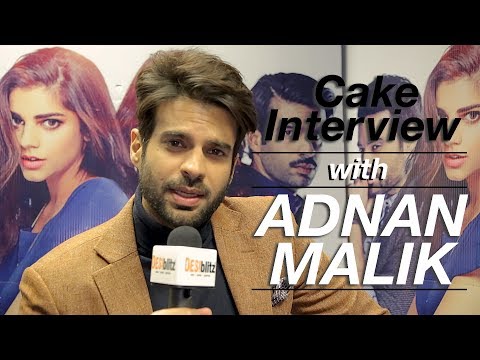 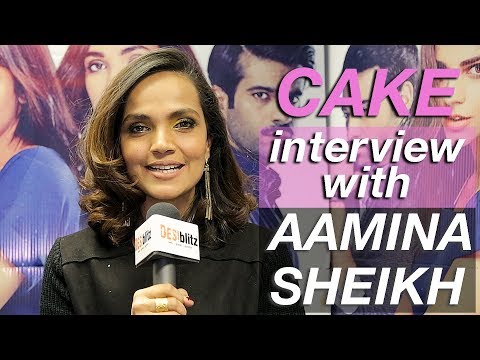 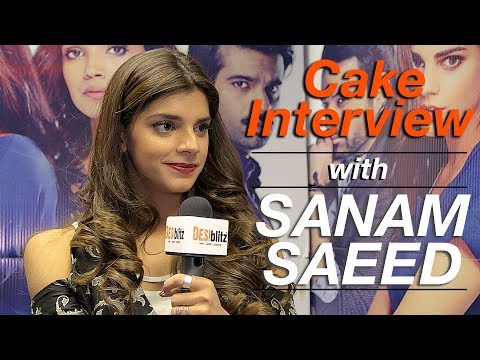 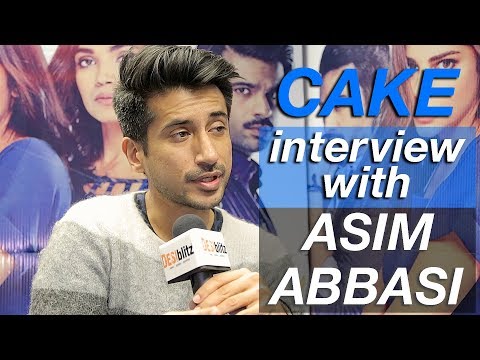 Evidently, there are a lot of positives in Cake. However, the pace is arguably slow and requires patience. By the second-half, however, we find ourselves drawn into the chaos of the family secrets. And the final climax is sure to leave you in sitting in a haze for sometime after.

Moreover, the modern representation of Pakistan in this Asim Abbasi film is so invigorating that even non-Pakistani viewers can resonate with the movie.

The film has also made history by having its world premiere at London’s Leicester Square. This is a first for a Pakistani movie. Reflecting on this brilliant achievement, director Asim Abbasi tells DESIblitz:

“I think it’s just creating an image of world cinema, that’s important for us. We don’t want to market this as such a standard run-of-the-mill Pakistani film with the same kind of stuff you normally get to see.”

“We have tried to tell a very honest and emotional story. I think it is something that can resonate with worldwide audiences.”

Abbasi was also honoured with the ‘Best Director’ award at the closing gala ceremony of the UK Asian Film Festival, an impressive feat for his debut feature.

Overall, the movie makes a great watch. Emotionally-charged, heartbreaking and ultimately uplifting, this is one slice of cake which the viewer can happily devour.

Anuj is a journalism graduate. His passion is in Film, Television, dancing, acting and presenting. His ambition is to become a movie critic and host his own talk show. His motto is: "Believe you can and you're halfway there."
Sanjay Dutt sends Legal Note to Publishers for Fake Autobiography
5 Best Gujarati Characters Played by Bollywood Actresses