Builder who Stabbed 3 to Death faces No Charges

A builder who stabbed three men to death in Seven Kings, Ilford, will face no charges in relation to the violent clash.

the group had got into a dispute with Mr Singh over an "outstanding debt".

Builder Gurjeet Singh, aged 30, will face no charges after he stabbed three men to death as they attacked him.

As a result, he has become the first person in the UK to face no charges over a self-defence triple killing.

On January 19, 2020, Mr Singh was cornered by a group armed with knives and a hammer as he walked home from his local Gurdwara in Ilford, London.

The Metropolitan Police have now said that Mr Singh has not been charged with either murder or manslaughter.

A fourth attacker who survived was sentenced for conspiracy. A fifth man who is believed to have been the driver was also jailed.

According to a source, CCTV footage of the attack showed Mr Singh as he “went all Bruce Lee” as he defended himself.

A hearing at Redbridge Magistrates Court took place shortly after the attack. It was heard the group had got into a dispute with Mr Singh over an “outstanding debt”.

The dispute was over a business deal.

During the attack in Seven Kings, Mr Singh suffered multiple wounds as he defended himself.

This included a “crush injury” to the top of his head consistent with a hammer attack, a cut to the back of his head and forehead and a 5cm cut to the left side of his head. One of his hands was also wounded.

The three deceased and two survivors had seen the builder at the Gurdwara in Ilford just minutes before the attack.

It followed a community event to celebrate the birth of a baby at nearby venue Krystel Banqueting where there was a disagreement.

On January 19, the attackers waited for Mr Singh to leave the Gurdwara. Mr Singh was then chased and boxed in. 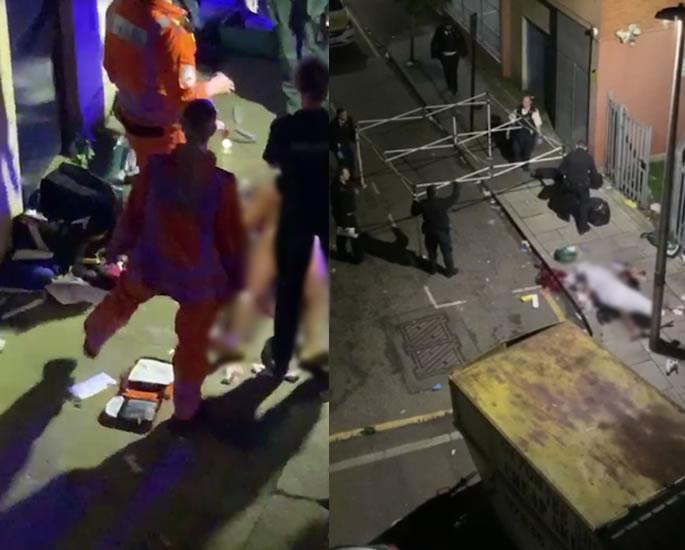 Louis O’Donoghue, a scaffolder who arrived at the scene shortly after, said at the time:

The two survivors were sentenced in August 2020.

Sandeep Singh, of Romford, is of no relation to the victims. He had been living illegally in the UK. He was jailed for four years for wounding with intent and will be deported back to India after serving his sentence.

His brother Harpreet was the appointed getaway driver on the night. He had also overstayed his visa and will be deported after serving his 12-month sentence.

Gurjeet Singh was charged with possession of an offensive weapon in a public place and he was remanded in custody for trial in February 2020.

He was never charged for the deaths of the three victims.

In August, he was found not guilty at Snaresbrook Crown Court.

A Met Police spokesperson said that Mr Singh had initially been arrested for murder, but was charged only with possession of the knife, for which he was subsequently cleared.

Mr Singh lived in Dagenham at the time of the attack. The Indian national had overstayed his visa and was served with a notice to leave in May 2015.

It is not known when he first entered the UK but received a student visa which expired in November 2013.

In 2015, he made a failed application to remain in the UK under the Human Rights Act.

Dhiren is a journalism graduate with a passion for gaming, watching films and sports. He also enjoys cooking from time to time. His motto is to “Live life one day at a time.”
Man jailed for Killing Best Friend’s Father during Altercation
Priti Patel paid £45k to become a Member of the MCC