Rishi Sunak made history by becoming the first British Asian Prime Minister of the UK, but how did British Asians react to the breaking news?

'It’s something to celebrate for all ethnic groups"

Rishi Sunak became the new Prime Minister of the UK after Liz Truss resigned after just 44 days in office.

The moment means the UK have a British Indian Prime Minister for the first time in its history.

Truss became the shortest-serving British Prime Minister after a series of financial decisions that tanked the economy and the value of the British pound.

After a few days, the Conservative Party were quick to vote for their next leader.

There were hints of Boris Johnson making a return for a second term but he removed himself from the vote.

Sunak’s nearest rival, Penny Mordaunt, dropped out of the race a few minutes before the 2 pm deadline on October 24, 2022.

So, ironically on Diwali, Rishi was appointed the new head of the Conservative Party.

As the news broke out, social media went into a frenzy and there was an outpour of jubilation, concern and celebration.

Whilst this monumental result has gone into the record books, there has been mixed reaction from the wider public and British Asians.

Seeing someone of South Asian heritage as Prime Minister is no ordinary feat. Many British Asians feel ecstatic to see someone representing the culture in office.

However, is Rishi Sunak in power due to his leadership qualities or were the Conservatives left with no other choice?

In a DESIblitz poll released immediately after Rishi Sunak’s appointment, we asked the public how they feel about him becoming Prime Minister.

32% of the vote said they feel “optimistic” whilst an overwhelming 49% felt he was “better than Liz Truss”.

Interestingly, 17% said they “hated the decision” and 2% of the vote “would have preferred Boris Johnson back”. 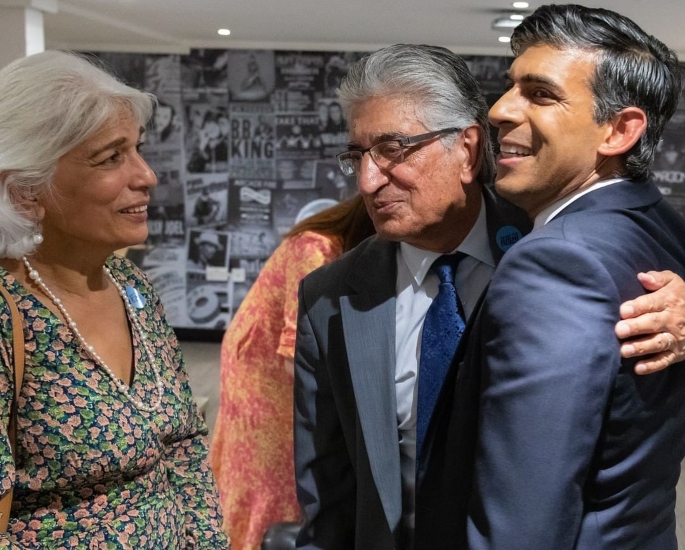 Although most of the UK feels he’s a better candidate than Truss, it’s important to gauge the feelings of British Asians.

Do they think he will bring more diversity to future governments? Will he inspire the next generation? What kind of standard will this set for the UK?

Somia Bibi, a DESIblitz writer had her say on the matter:

“I always thought I’d be smiling wide when someone of South Asian heritage became Prime Minister.

“But honestly, all I could do when I was told Rishi Sunak, another Conservative was our (unelected) PM was wince/cringe.

“He seems so far removed from the world most people live in, which will stop him from truly understanding the realities people deal with every day.

“Here come more cuts and policies that will make the poor, working-class etc bleed and the rich richer.”

Gagan Kaur, a teacher from Lozells, Birmingham chimed in, stating:

“Listen, it’s great for the community and culture. You cannot deny seeing a brown person as PM is uplifting.”

“But, you also can’t forget who he works for and what he comes from. This is the same person that sniggered at working-class people.

“So, to the other British Asians who may look up to him, just remember he’s not cut from the same cloth as us.

“Representation matters and I’m glad he’s shone a light on that. But for me, he doesn’t represent me or my community.”

“He’s brown yes but also a Tory. I feel like he’s a good guy but he’s backed and supported a party that doesn’t care about the people.

“Just look at how they acted during Covid. It’s like we’re letting Rishi Sunak off just because he’s brown.

“And the guy who is mega-rich is about to lead us out of a recession and cost of living crisis? Give me a break.”

It seems that some British Asians believe the appointment is good for history but Sunak’s policies and background don’t coincide with such a historical moment. 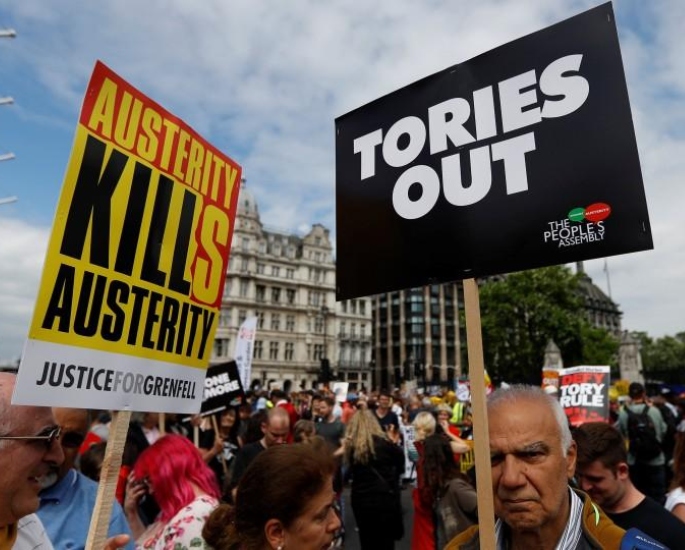 Husband and wife, Surjit and Simi Dubb from London also shared their thoughts and were more positive about the decision. Surjit revealed:

“Growing up a British Asian in the UK had many life challenges in the face of adversity.

“50 years on I still query whether I am accepted by the minority, despite working as a professional and practising as a lawyer.

“However, this demonstrates that regardless of race, creed, colour and religion one can succeed.

“It is time to educate those who do not accept Rishi’s appointment because of the colour of his skin.

“The last month may have raised questions about Truss’ appointment, but we will never know.

“Now it is time to relish Rishi’s appointment and for everyone to support him for his ability and nothing more!”

His wife Simi had a similar optimistic attitude, expressing:

“We are witnessing history with Rishi Sunak being the first British Prime Minister of colour. He is also the youngest in over 200 years.

“This demonstrates that society is moving in a direction where equality and equity prevail.”

“The sentiments of diversity have much to celebrate, we all need to start to move beyond why and how he was appointed.

“The whole country needs to get behind him regardless of race, religion and age, to make the country more economically prosperous.”

Joining their celebratory spirit, but with caution, is Amit Singh from Birmingham, who said:

“I’m delighted to see a person of colour become the PM in my lifetime. I think it’s something to celebrate for all ethnic groups in the UK.

“However the challenge will be, can he unite the Conservatives and reduce the damage at the next general election because Labour look like they will win but by what margin.”

In a similar fashion, 58-year-old Zihar Ali from Nottingham thinks Rishi Sunak will do well in office:

“I’m glad someone like ourselves is PM. I’ve seen him embracing his culture and hope I see a British Pakistani in Downing Street one day.

“He’s got a good education and knows about finances. We’re in a crisis right now so I feel like his knowledge will be useful.

“I feel more confident in him than I do in Liz Truss or Boris Johnson anyway.” 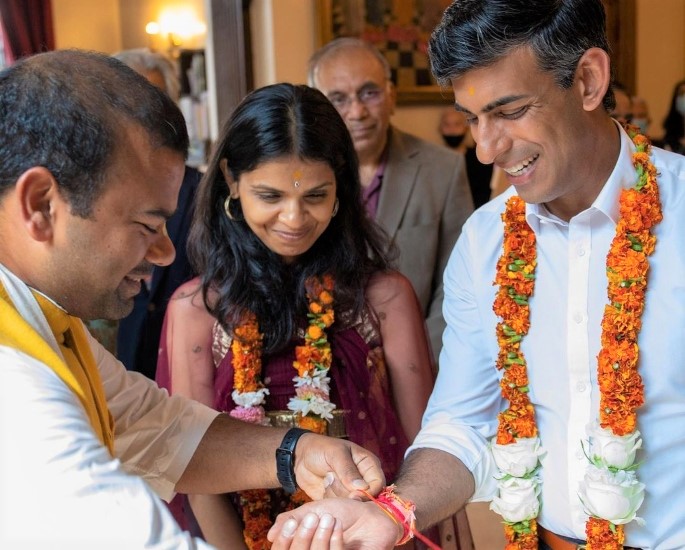 However, Nik Panesar from Erdington, Birmingham, is not too keen on the idea of Rishi being Prime Minister.

She believes the focus on his heritage could also be his downfall:

“I have no thoughts, in particular, it’s just another person here to try and deliver promises which rarely benefit the majority of the population.

“Though I am curious to see how much of his success or failure is put down to the colour of his skin. And how he is received by the die-hard English who have an allergy to other races.

“It’s not so much the politics. It’s how this country responds to a person of colour rising that will be most interesting to see.”

Mamta Magar, a teacher from Worcester thinks a person of South Asian descent in Downing Street is a success, but Sunak’s beliefs as a Tory politician cannot be overlooked:

“Well…I think it is obviously amazing for the purpose of representation of the Asian community.

“However he is still a Tory. I wish he was a Labour representative.”

There was a major reaction on Twitter with British Asian figures and politicians sharing their feelings on the social platform.

“While I strongly disagree with Rishi Sunak’s politics and question his mandate, it’s important to recognise the significance of Britain’s first Prime Minister of South Asian heritage.

“It’s not something our grandparents would have imagined when they made the UK home.”

Journalist Shaista Aziz also tweeted her opinions on the matter:

“This is a hugely symbolic and representative moment for many, many people, and not just the usual suspects, those on the right side of politics.

“To dismiss or ignore this fact is to discount and dismiss facts.

“Just as asking people of colour to celebrate Sunak becoming PM, by virtue of him being brown, is equally reductive, tokenistic, and dangerous.

“Real representation has to be meaningful otherwise it’s pure tokenism.

“And real representation means actioning policies that don’t harm the people and communities you espouse to come from.

“The very people and communities disproportionally, harmed by mutliple crisis.” 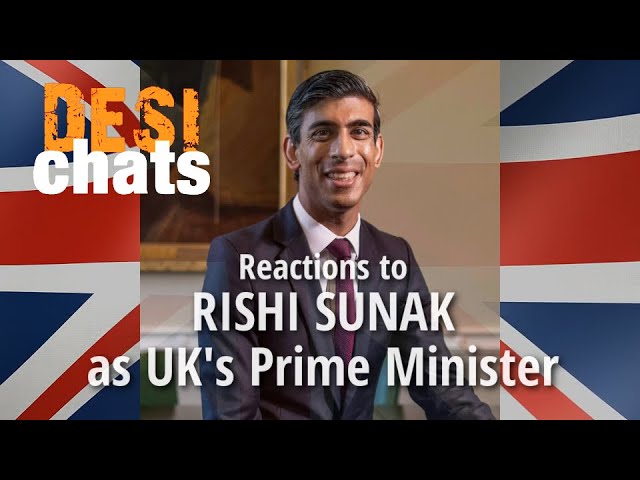 It seems the overriding opinion so far is that the appointment of Rishi Sunak hasn’t gone done overwhelmingly good.

Whilst British Asians share their joy in having someone of South Asian descent providing some representation, the focus should be more on his policies.

After all, they believe he has a job to do and regardless of background, colour or heritage, caring for the British public is the priority.

However, there are other British Asians celebrating this historical news and believe he is the man to take the country forward.

There are major issues to overcome with the cost of living crisis being at the forefront.

Only time will tell whether or not Sunak can fix these problems or fall further into a hole of broken promises.