Bollywood reacts to the Taliban’s re-taking of Afghanistan

In the wake of the Taliban taking back control of Afghanistan, members of the Bollywood industry are expressing their views on social media.

Multiple Bollywood stars have taken to social media to react to the Taliban’s re-capturing of Afghanistan.

The Taliban seized the capital city of Kabul on Sunday, August 15, 2021, and President Ashraf Ghani has resigned.

The citizens of Afghanistan are once again fearing for their lives, and the whole world is having its say on the crisis.

Many Bollywood celebrities are taking to social media to express their anger and concern over the current state of Afghanistan.

Actress Kangana Ranaut, known for her controversial views on social media, recently took to her Instagram story to share her thoughts. 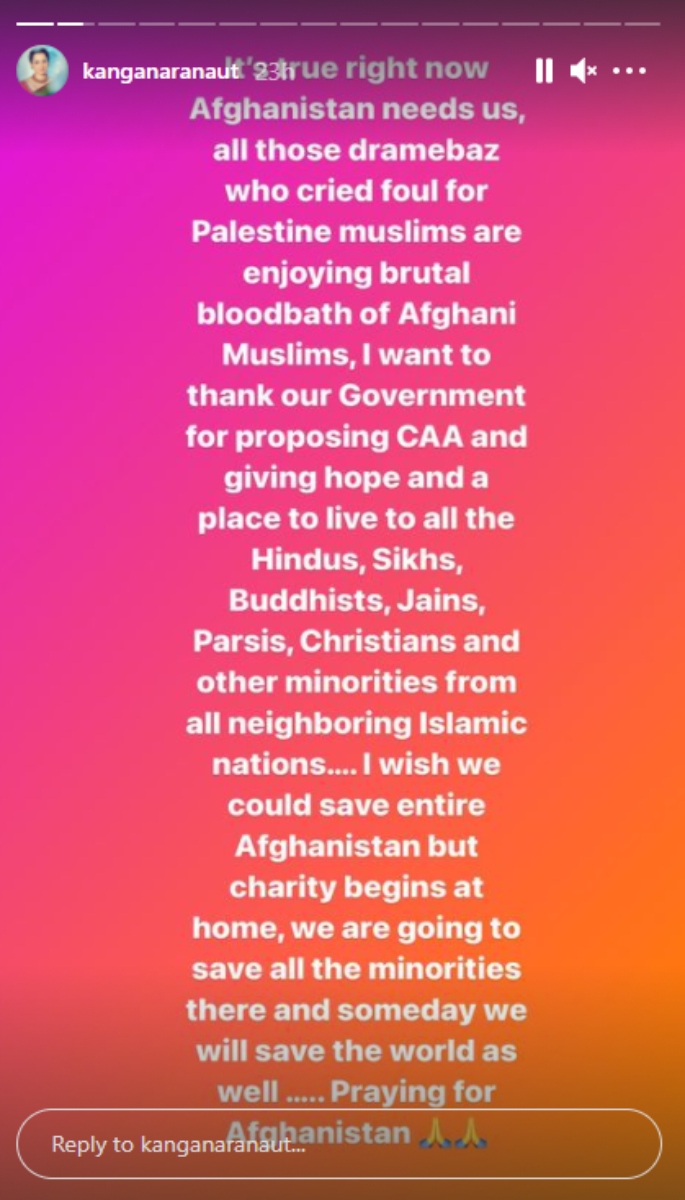 She also wrote a note to thank the Indian government for giving hope, saying:

“It’s true right now Afghanistan needs us, all those dramebaz who cried foul for Palestine Muslims are enjoying brutal bloodbath of Afghani Muslims.

“I want to thank our Government for proposing CAA and giving hope and a place to live to all the Hindus, Sikhs, Buddhists, Jains, Parsis, Christians and other minorities from all neighbouring Islamic nations…

“I wish we could save entire Afghanistan but charity begins at home, we are going to save all the minorities there and someday we will save the world as well…

Actor Sonu Sood is also praying for Afghanistan. In a tweet from Monday, August 16, 2021, he said:

“Afghanistan stay strong. Whole world is praying for you.”

Filmmaker Shekhar Kapur, who made several documentaries in post-Taliban Afghanistan, also took to Twitter to send a “special prayer” to the Afghan people.

Special prayer ? for the people of Afghanistan. A nation wrecked and destroyed by colonial ambitions of foreign powers. #Afganistan

He said: “Special prayer for the people of Afghanistan.

A nation wrecked and destroyed by colonial ambitions of foreign powers. #Afghanistan”

Swara Bhasker took to her Instagram story to share a piece of artwork by Afghan graffiti artist Shamsia Hassani.

The art shows a girl wearing a hijab and holding a keyboard while a group of armed men watch over her.

Alongside the image, Bhasker wrote:

“The Afghan people have been thrown to the wolves. Women especially.

“Taliban are monstrous in their brutal exercise of force and power.

“They are murderers and misogynists; their ideology is one of hate and violence and that won’t change.”

Sayani Gupta shared the same piece of artwork to her own Instagram, saying that humanity has failed for allowing the Taliban to take control of Afghanistan again.

“Chills in spine going down constantly, thinking about Afghan women and children.

“Can’t imagine the brutality that’s going to follow now. What the hell are we doing as humanity?

“Within a month of men going to space privately, a country full of women and children just left to be brutalised and raped.

“We have failed ourselves! Disgusted. Just disgusted.”

Since the Taliban re-took control of Afghanistan, Kabul airport has been packed with thousands of Afghan nationals desperate to leave the country.

Many even attempted to climb onto a US Air Force plane as it left the tarmac, with fatal results.