Bollywood men’s hairstyles are a very significant aspect of their looks and styles. We look at 10 Bollywood actors and their distinctive hairstyles to give inspiration to any hero!

The Bollywood film industry has a huge influence on Desi culture. Especially that of fashion and beauty.

Fans and followers go to extremes to look like their stars. From wearing the same clothes, their sunglasses to changing their hairstyle to look like a star.

This is huge for male fans. There are lots of Bollywood men’s hairstyles which are based on the individual look of a specific actor.

Indian Hairdressers are well-known to be asked by a typical Bollywood fan:

Fans and lovers of trendy hairstyles influenced by Bollywood are often adopting them as their own.

We’ve compiled 10 Bollywood men’s hairstyles that give you that stylish look to whether you are a fan or not!

SRK, King Khan, Shah Rukh Khan and the Don himself has a great head of hair. One of his hallmarks as a star is his hairstyle and how it adds to his overall facial look.

Although he does change his hair for specific film roles, like in the movie series Don, epic Asokha, his day-to-day hairstyle has stayed pretty much the same through the years.

SRK’s hair has a full body and dark volume look with a slight side parting or all pushed back over the top and allowed to naturally fall. His hair is long and the back covering most of his neckline. 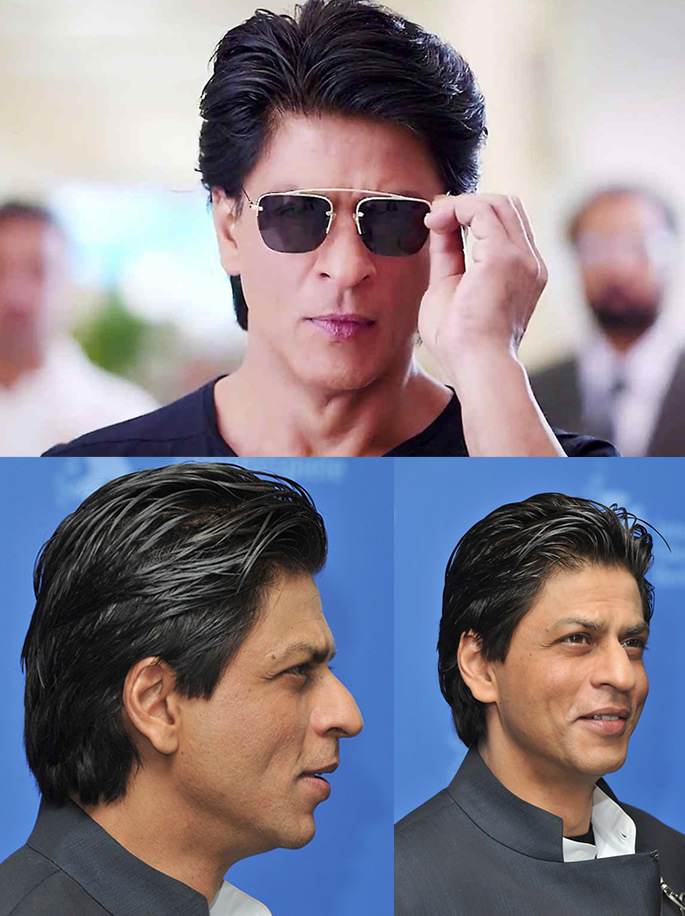 The style sees the sideburns meet the ears midway but has the hair around the ears lightly trimmed. Allowing enough to go behind them when using fingers to push the hair back.

Shahrukh’s public look tends to have a more oily look compared to a dry hair, which can mean he nourishes his hair with either some hair oil or allows his scalp to build up with natural oils.

This hairstyle is best for hair which has a good volume,  which is groomed with a light trim to keep the sides and back proportionate, and then is styled using hair products.

This cut is easy to manage and maintain even by applying some water to it, in between washes.

Shahid Kapoor has a distinct style and cut which has progressed over the years. The style has shorter sides with a nice body of hair above his head.

In some photos, Shahid tends to go much shorter on the sides, halfway up to his head with his upper hair styled and gelled upwards. In others, the side is less defined depending on growth.

Either way, it is a modern male hairstyle which is accompanied by his trimmed beard. 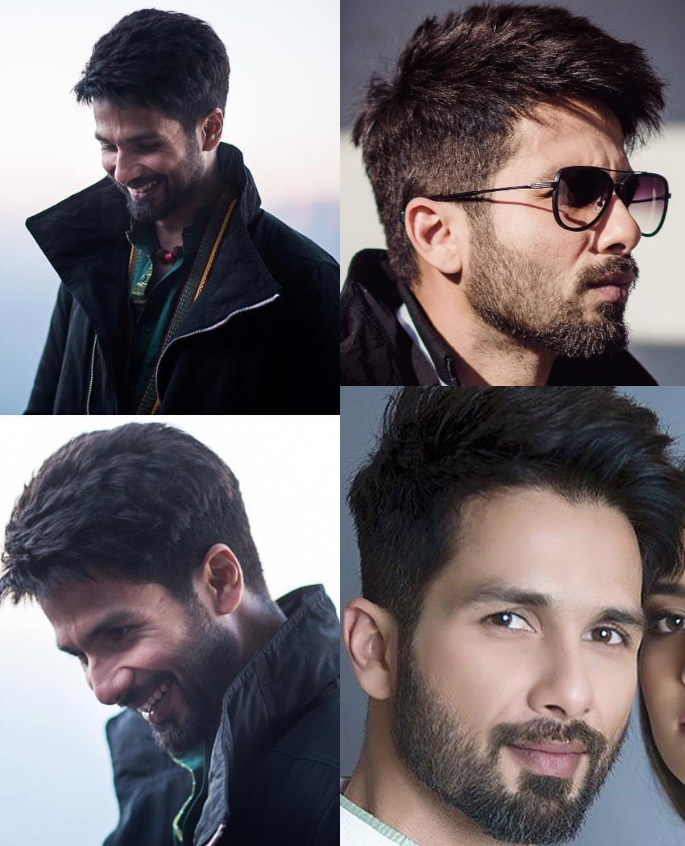 This cut has a short back and sides with his neckline visible with a slight taper. Whilst the upper hair has a semi feathered cut which is not as short as the sides but defines the volume.

Shahid is known to let the upper hair grow long whilst still maintaining the short sides and back.

This hairstyle is best with thick hair with good volume on top which is groomed with a regular cut to keep the sides in trim and then is styled using hair products.

Shahid tends to leave his hair natural and dry in his personal photos on his social media. Showing the hairstyle is an everyday look.

But when he is at an event or special outing Shahid Kapoor uses hair products to enhance the look of this men’s hairstyle.

Aamir Khan is known for changing his looks incredibly for his movies and not just his hair. He has changed his physique incredibly for films like Dangal.

His hair has also dramatically changed. From a shortcut hairstyle all over, a look that he has evolved is an ancient Indian era style with long hair, a nose ring and a long pointed moustache.

This look can work or be a complete failure if not created correctly. Growing hair for this style is important but how the growth is then styled makes all the difference. 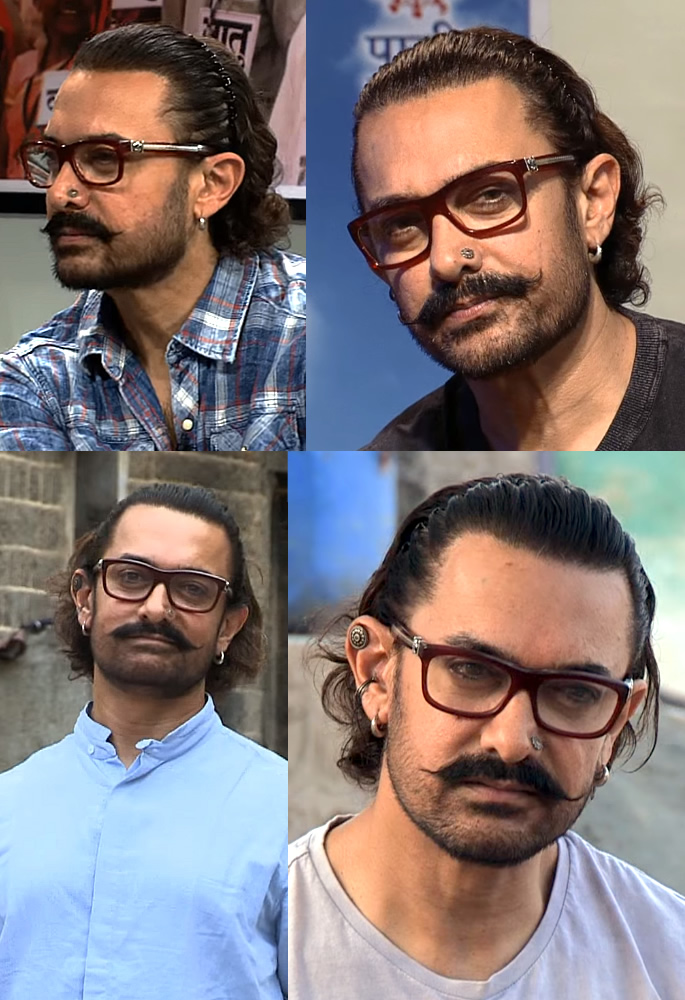 The front and top part and sides of his hair are weaved into a tight style. Aamir wears a thin plastic hairband to hold the weaved style in place.

The back of his hair is grown long enough to just above the neckline. It is held back and naturally curls on the sides. It accompanies the facial hair nicely.

This hairstyle is best with hair left to grow long and then is styled using the weaving effect to keep it in place. The back is left natural.

Although this style is unique to Aamir Khan but is similar to that of Real Madrid football stars like David Beckham and Gareth Bale, and Zayn Malik in the past.

Ranveer Singh is the ‘bad boy’ of Bollywood full of cheek, laughter and fun. His hairstyles have been loud and wonderful at times. However, his thick hair is a major characteristic of his look and style.

Ranveer’s hairstyle show here is a look which he dons frequently, when not doing a specific film role. This style has a thick volume on top with the sides slightly thinned down, revealing the ears.

Sometimes trimmed quite tightly on the sides too, especially when using gel with it. 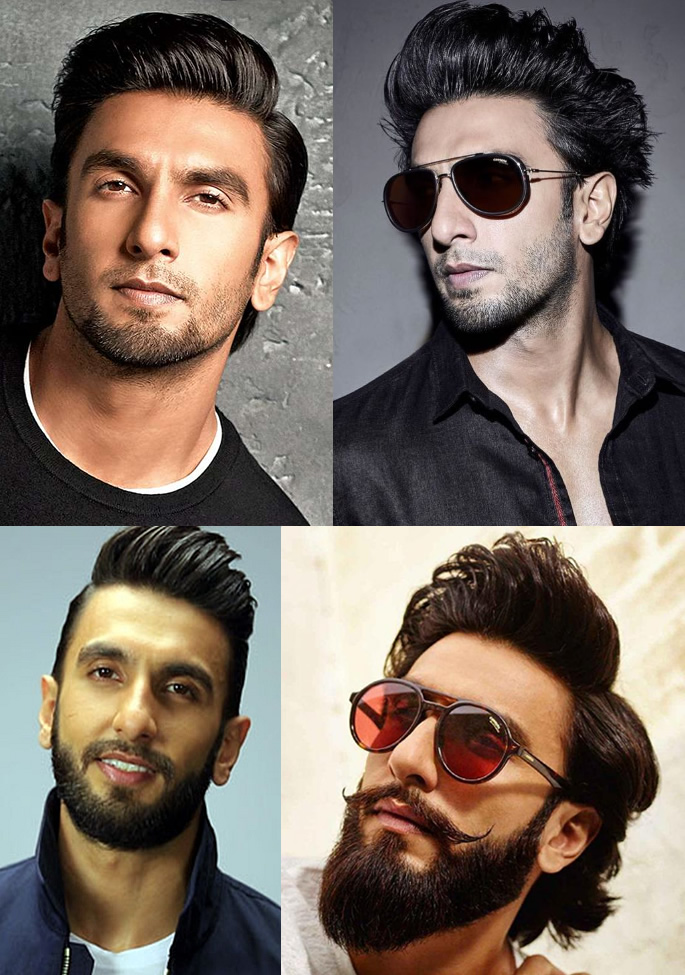 On the top, the hairstyle is styled upwards on top and portrays a nice thick dense look. At the back, it is long and meets the neckline. Sometimes Ranveer lets it grow and it is longer too at the back.

This hairstyle is best with thick hair and does require the need of hair gel or wax to style it upwards especially.

Frequently Ranveer matches this hairstyle with a beard. Either the beard is trimmed or grown and styled neatly.

Varun Dhawan is one of Bollywood’s growing actors and is getting more and more known for his commitment to his roles.

His hairstyles have changed but mostly keep the same base style. This look of outgrowing hair and a slightly messier but still contained style adds that extra masculinity.

Varun let his hair grow into this hairstyle which makes it a great style to wear if you are not a short hair fan and not overly obsessed with neatness on the sides. 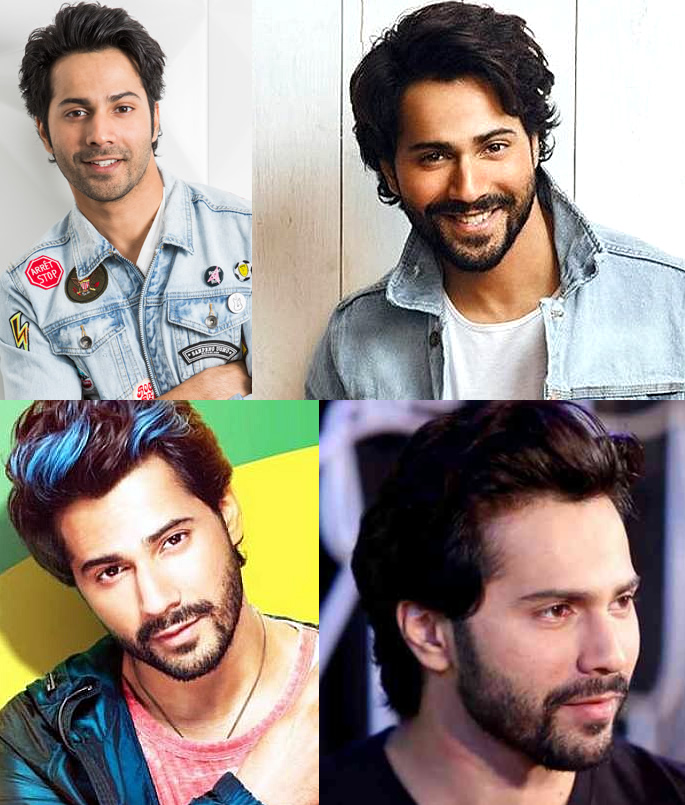 The style has long sideburns which go just down to the earlobe and the rest of the hair has thick sides slightly overgrown around the ears.

This hairstyle is best styled with thick hair on the top and growth on the sides and back which is not overly neat.

The relaxed look of Varun’s with thicker sides and a side-parting top is ideal if you are looking for a more casual everyday look, which does not have to be overly groomed.

Hrithik Roshan is known as one of the most handsome men in Bollywood along with some of his hit films and his fitness regime.

With his greek like looks, Hrithik’s hairstyle has varied but not hugely. Sometimes his hair is a little longer and other times he will remove the sides and thin them down.

However, the top part and body of his hairstyles tend to hold a good volume. 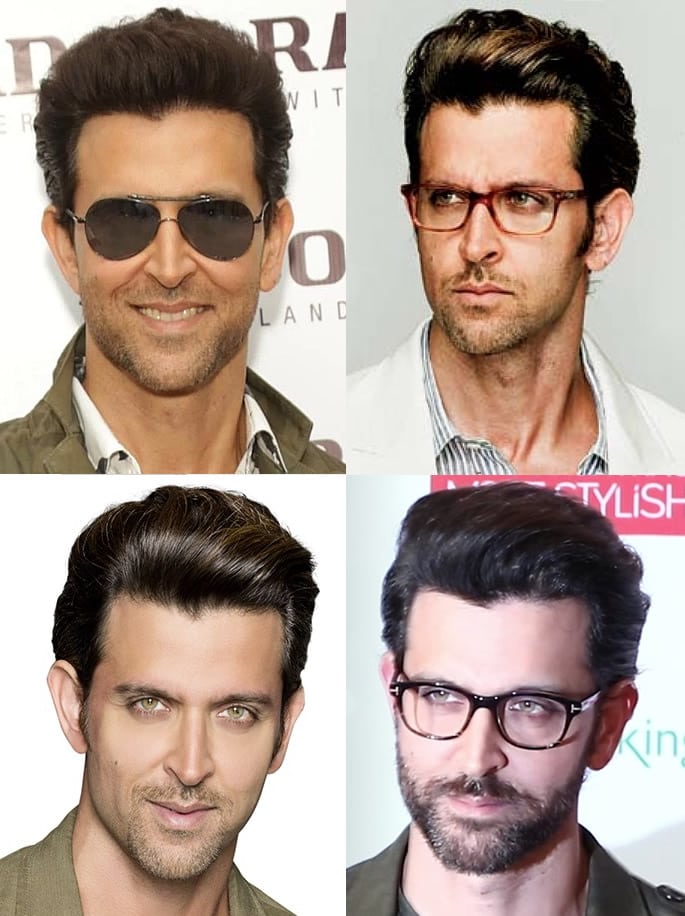 The hairstyle here depicts the volume on top which is styled and combed upwards, slightly towards his left. Giving it a nice thick body look.  The sides are above the ears and combed back too. The neckline of this style is left natural but is not too long.

However, Hrithik is known to let the back and sides grow into a curly hair effect too.

This hairstyle looks good with thick upper hair with sides which are less in volume and above the ears. Hair wax or dry gel will work well to keep the style in place.

Frequently Hrithik wears stylish glasses which do go very well with this hairstyle.

Ranbir Kapoor holds the grail for the famous Kapoor family of Bollywood. His youthful looks and can-do attitude has kept him going in his film roles.

Ranbir’s hairstyles have changed at times where he had long hair and a Beatles style look. But at its tidiest, his style is a mix of feathery look with a slight combing towards the left and the front above the forehead.

This style includes sideburns down to his earlobes and a slightly tapered cut upwards on the sides. 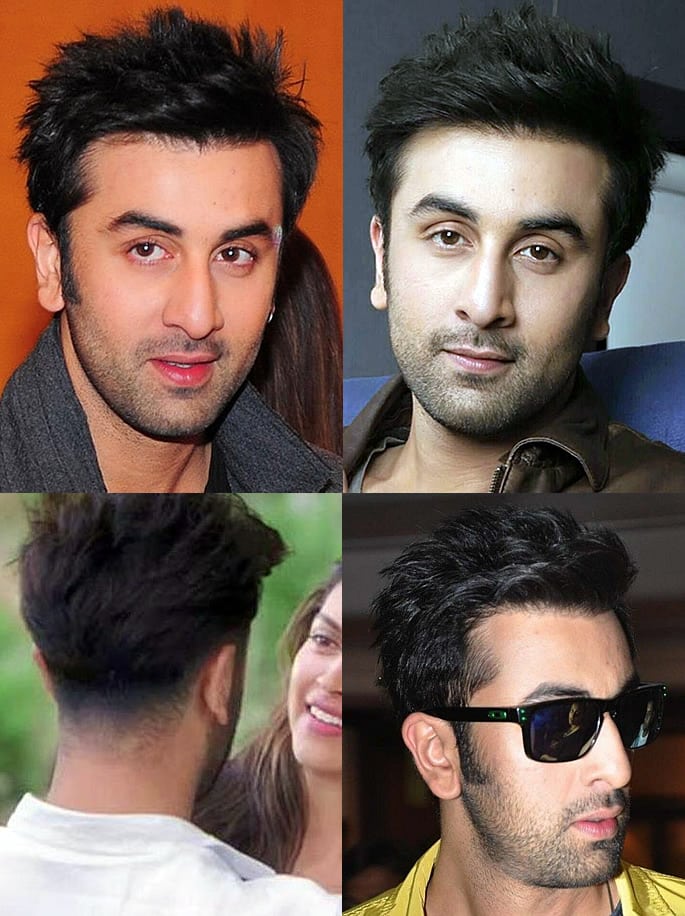 The hairstyle on the top is styled upwards on top and has a look showing the use of fingers to comb it for a mild spiked effect. At the back, it is short, tapered and squared at the back of the neckline.

This hairstyle works well with hair which has a razor feathered cut.

It needs the use of hair gel or wax to style it upwards with the fingers or a brush.

Ranbir’s face which is triangular shape works well with this hairstyle, which he accompanies with a little stubble too.

John has changed his hairstyle to a shorter cut after having very long hair in the early days.

The style has less volume with short sides and longer hair on top which is groomed over the head. 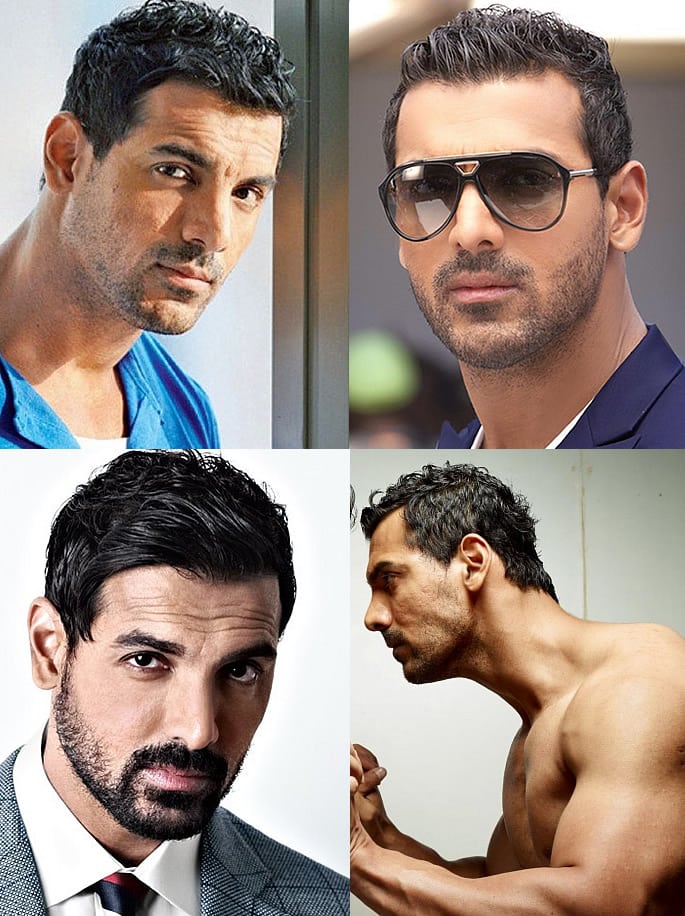 The cut has a ruffled appearance which is not too neat on the top and the sides are not shaved or faded but left natural. There is a hint of short sideburns but mostly John tends to have some stubble or a beard accompanying the look. At the back, John has let it grow to the neckline or sometimes he has tapered and squared it off too.

This style is ideal for a short haircut and especially if you have thin hair. Use of a little hair gel is needed to keep the overall style looking good.

Tiger Shroff is of the new Bollywood generation. The son of Jackie Shroff, his popularity is growing and so is his spectacular physique.

Tiger’s hairstyle for film roles has been shorter and neater. But one look he is known for is the long and natural looking curly hair which is very different from other in Bollywood men’s hairstyles.

The style has plenty of volume and is not overly groomed, leaving it to grow and look bushier. 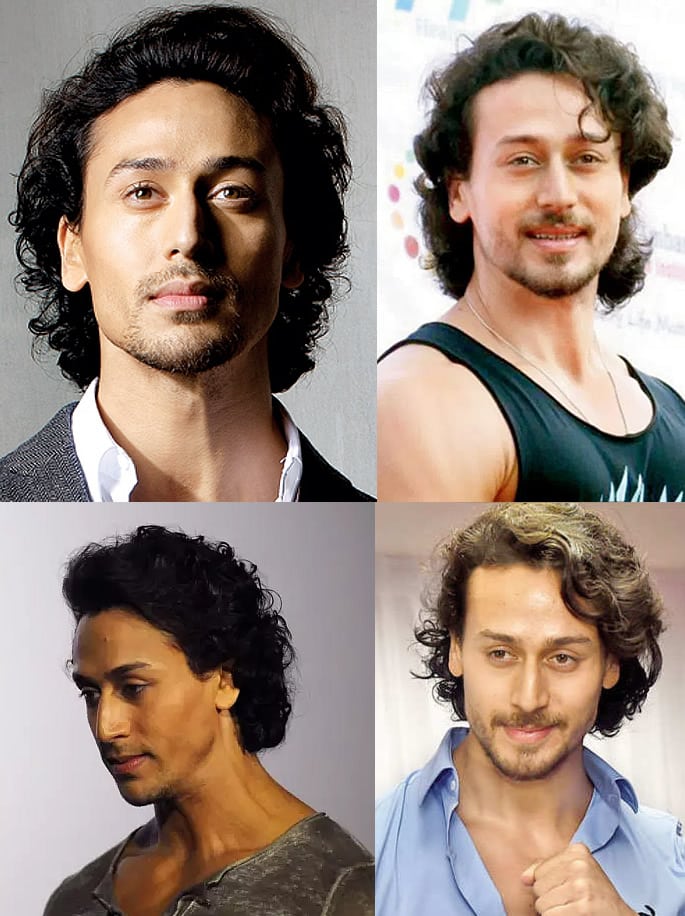 The hairstyle is trimmed slightly above the ears and sides are brushed back. But the prominent features of the style are hair allowed to grow long and curly at the back and pushed back on the top of the head. It is then allowed to naturally fall usually to the left side.

This hairstyle works well with thick hair which is allowed to grow long, is naturally curly and has a good volume on top.

These 10 Bollywood men’s hairstyles show that variety of cuts Bollywood heroes don for their individual looks.

Each style is individual as much as the star but they provide fantastic inspiration for male hairstyles which are stylish and attractive for every hero, whether you are in Bollywood or not!

Nazhat is an ambitious 'Desi' woman with interests in news and lifestyle. As a writer with a determined journalistic flair, she firmly believes in the motto "an investment in knowledge pays the best interest," by Benjamin Franklin.
10 Makeup Mistakes every Desi Girl should Avoid
10 Desi Foods to Totally Boost the Sex Drive for Men