Here are some outfit ideas based on what Pollywood divas have worn in the past for festivities and special occasions.

Our favourite divas from Pollywood never fail to raise the fashion quotient, especially during the festive season.

From heavily embellished lehengas to shimmering sarees, the leading ladies of Pollywood always know how to nail the ethnic wear trend.

As the festive season kicks off, here are some of our favourite looks from the most popular Punjabi divas including Sonam Bajwa, Shehnaaz Gill and Nimrat Khaira. 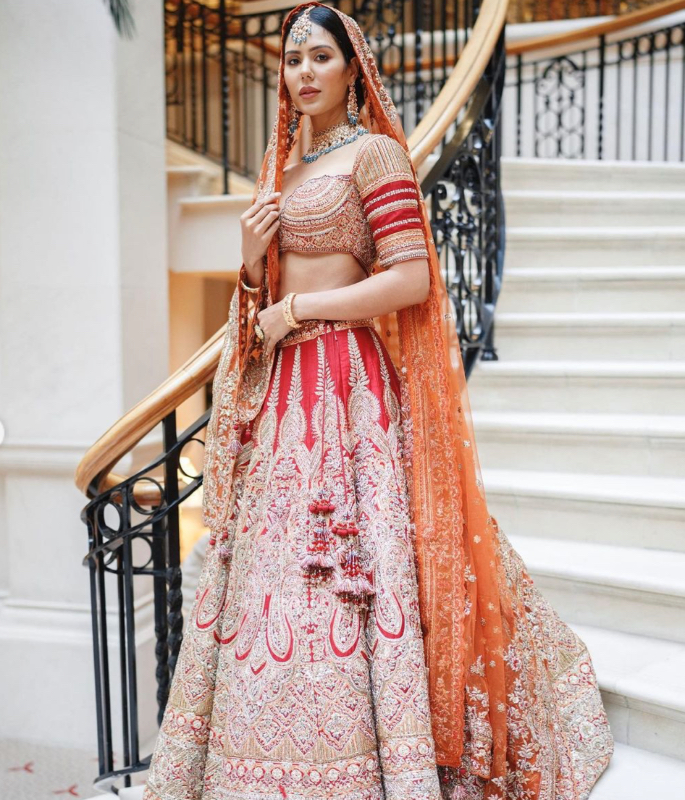 Sonam Bajwa managed to woo everyone with her stunning pictures in which she wore a beautiful red lehenga from Frontier Raas.

Needless to say, the Punjabi diva, who shot to fame after her award-winning film Punjab 1984, has a unique taste in fashion and leaves everyone starstruck with her attires.

Sonam was last seen in the Punjabi film Jind Mahi alongside Ajay Sarkaria. The duo previously won hearts with their on-screen chemistry in their first film Ardab Mutiyaran. 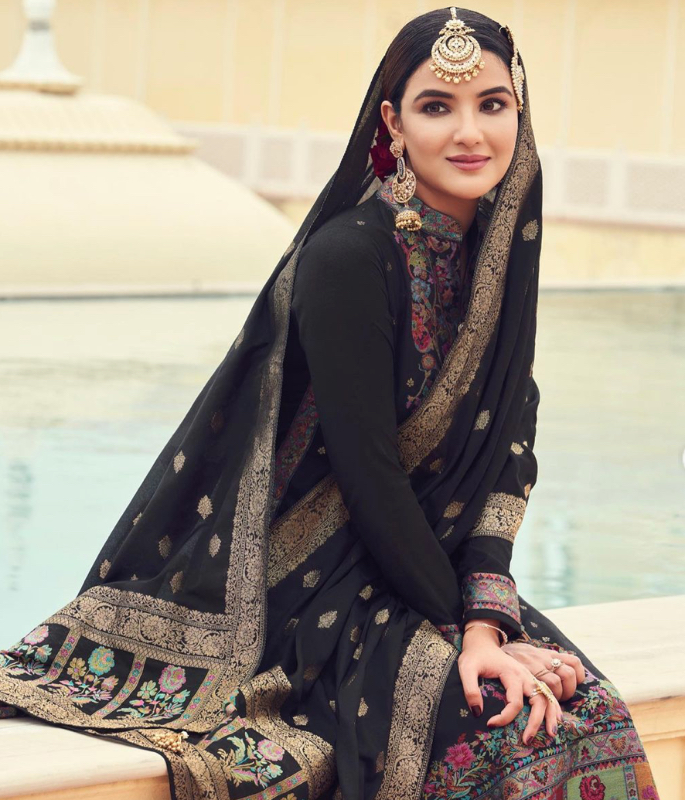 Jasmin Bhasin garnered plenty of compliments from her fans when she dressed in an all-black lehenga with a dupatta styled as a veil.

For this look, the television actress went for subtle makeup and nude lips. She completed her look with a large maang tikka on her head, large traditional earrings and a red rose tucked into her dark locks.

The Dil Se Dil Tak star recently returned from a romantic trip to Spain with her boyfriend Aly Goni. The couple is one of the most-loved duos in the television industry. 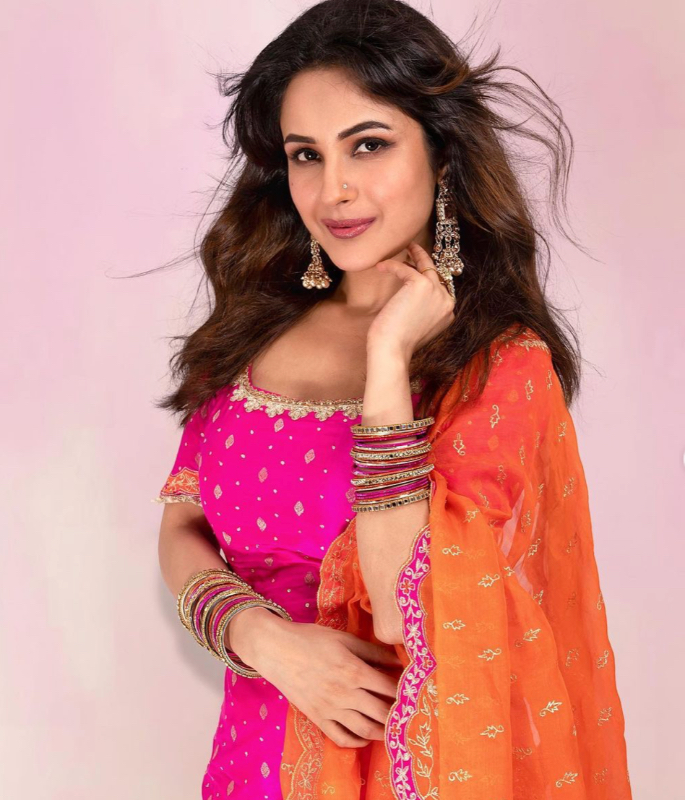 Shehnaaz Gill stole the spotlight during a television appearance when she wore a bright pink salwar suit with an orange dupatta.

The actress, who rose to fame after she participated in Bigg Boss in 2019, looked beautiful in her simple yet stunning look.

Shehnaaz will next be seen in the action-comedy film Kabhi Eid Kabhi Diwali alongside Jassie Gill and Salman Khan. 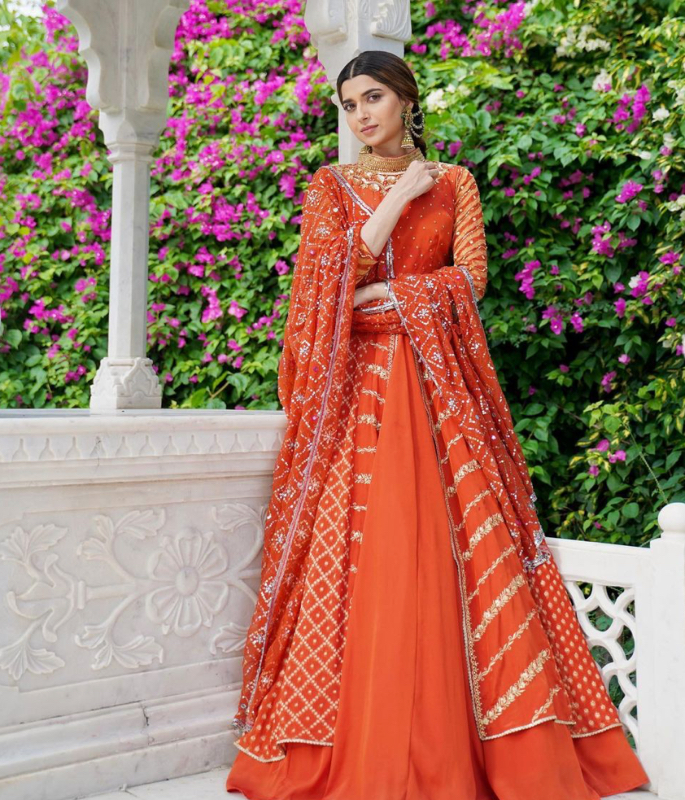 Nimrat Khaira leaves no chance to impress her fans with her festive looks.

Her outfit was embroidered and embellished using antique techniques.

The outfit she was seen flaunting is designed by Shruti Jamaal, who has designed various glamourous outfits for celebrities.

Nimrat Khaira recently impressed her fans with the music video for her new song ‘Chunni Lot’. 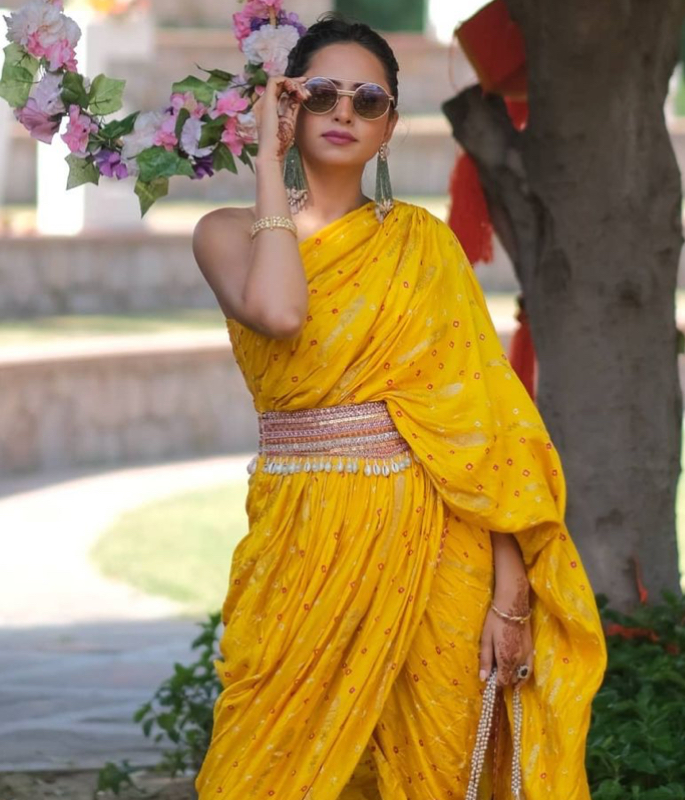 Sargun Mehta stunned in a statement saree in a stunning shade of yellow. The entire saree has red bandhej prints.

To add that extra oomph to her look, she picked a chunky embellished belt and a red potli bag.

To accessorise her look, she added a gorgeous pair of earrings and a bracelet.

We all want to look and feel beautiful during festivities and special occasions.

Millions of people take fashion cues from Pollywood celebrities and with this list, we hope you’ve bookmarked at least one look you plan to steal for your next festive look.

Ravinder is a Journalism BA graduate. She has a strong passion for all things fashion, beauty, and lifestyle. She also likes to watch films, read books and travel.
10 Stunning & Bold Shannon Singh Looks to See
Mouni Roy raises Temperatures in Sultry Pool Pics